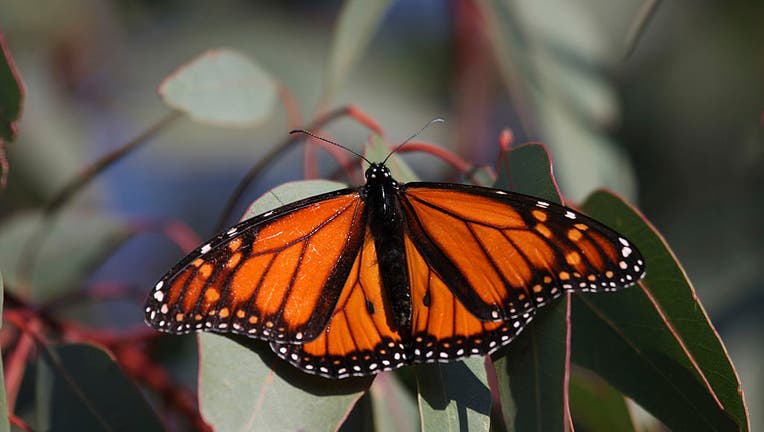 Volunteers counted nearly 250,000 western monarch butterflies during the annual Thanksgiving tally – a 100-fold increase from the year prior -- offering a glimmer of hope for the declining butterfly population.

However, conservation biologists with the Xerces Society for Invertebrate Conservation say it's too early to celebrate the jump, the highest count since 2016. Last year's count resulted in just 2,000 of the black and orange butterflies, the lowest ever since the annual count began in 1997.

"We know that these monarch numbers can go up and down even in large swings, and we've seen that in the past," Western Monarch Lead Emma Pelton said. "Historically, we've never seen an increase of this large in a single year in terms of the increase from 2,000 to over 200,000. But we've also never seen the population as small as it was last year. So insect numbers can do funky things, and we'll learn more as more years of data can have come in."

One theory is that the weather offered a respite for the delicate insects. Pelton said late winter storms could be detrimental to the next generation of monarchs, but there is no perfect model for how weather influences the numbers.

"We had a dry, warm spring and summer in California, which is when that first generation is really getting going, and if that first-generation does well, we tend to see an exponential increase as that migration continues across the West," Pelton said.

RELATED: Monarch butterflies making a comeback on the Peninsula. Here's why

The correlation between weather and the monarch population is complicated, Pelton said.

A 2021 study from the University of Nevada found that warmer and dry fall weather can lead to fewer butterflies.

Volunteer scientists participate in the butterfly count every year in the three weeks around the Thanksgiving holiday to document the western monarch population during the overwintering season, which runs from October to March. Before they head out, over 100 volunteers undergo training to learn the standardized monarch counting protocol.

Volunteers visit documented monarch wintering sites along the Pacific coast, searching for the mysterious butterflies. This year volunteers surveyed 283 overwintering sites counting 247,237 butterflies, and five new sites were found thanks to tips from the public.

Jessica Griffiths, the regional volunteer coordinator in San Luis Obispo County, said this year's tally was one of the most exciting in her 20 years counting monarchs.

Griffiths said that monarchs were spotted in locations where they hadn't been seen in years. Ventura County had a rebound with nearly 19,500 butterflies. The last time Venture saw this many monarchs was during the 2001 count.

Santa Barbara County reported the most monarchs with more than 95,000, including more than 25,000 found on private property.

According to the Xerces Society, San Luis Obispo County was second with more than 90,000 butterflies.

Despite the encouraging numbers, Pelton said the butterfly population is not definitively on the rebound. Monarchs have faced massive declines over decades due to habitat loss at overwintering sites in California.

"This year is not recovery, and it will take multiple more years to understand if this is the beginning of a trend or just a blip," she said.

The western monarch population is 5% of what it was in the 1980s, estimated in the low millions. Conservation biologists agree pesticides and development killing off milkweed, the monarchs' leading food and habitat source, is the greatest threat to the North American monarch population. There are national efforts underway by the Xerces Society and other conservation groups to plant native milkweed to restore the monarchs' habitat.

"Creating and protecting habitat is really important and is one of the most salient ways that we can help protect and restore insect populations," Pelton said.

A 2020 U.S. Fish and Wildlife Service assessment found that adding the monarch butterfly to the listing under the Endangered Species Act is warranted. Still, it did not declare the butterfly endangered because other species are considered a higher priority for federal protection.

Pelton said the U.S. Fish and Wildlife Service looked closely at the milkweed that has been planted versus what has been lost due to development and land use.

"Their conclusion for the western U.S. is that we're losing ground. So it's kind of a tricky message to the public like we're racing to keep up, and we're losing ground," Pelton said, adding, "we need to keep working at smaller scales with individuals and more broadly."