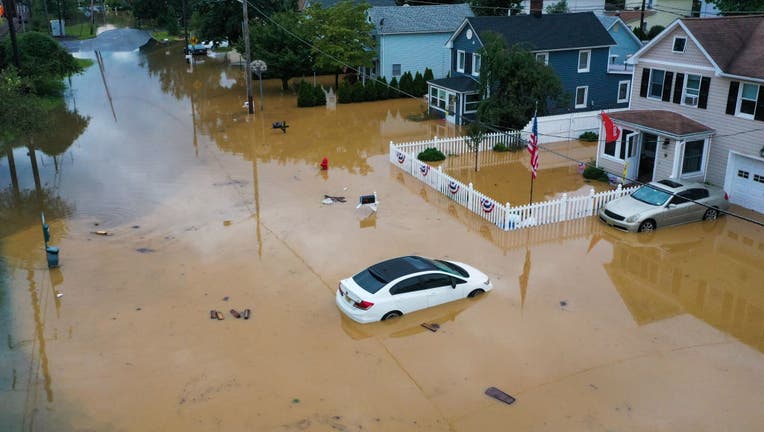 NEW YORK - Tropical Depression Henri lingered over the U.S. Northeast on Monday, hindering cleanup efforts with heavy rainfall and posing a flood risk in some areas.

Henri, which made landfall as a tropical storm Sunday afternoon in Rhode Island, was expected to bring an additional 1 to 3 inches of rain on Monday to the region. Rains from the storm had already deluged areas from New Hampshire to New York City and down to New Jersey and Pennsylvania.

On Sunday, it brought 3 to 6 inches of rainfall over many areas — with isolated areas receiving more. New England officials warned that just a few more inches of precipitation could cause problems after a summer of record rainfall.

"The ground is so saturated that it can flood with just another inch of rain," Connecticut Gov. Ned Lamont said late Sunday.

The storm left more than 140,000 homes without power on Sunday across the New York City metropolitan area, with Connecticut and New Jersey bearing the brunt. Heavy rain also closed bridges, swamped roads and left some people stranded in their vehicles.

In Manchester, Connecticut, a Hartford suburb some 40 miles from the coast, Annette Landry hoped Monday's rains wouldn't repeat the flooding that left three units in her condominium complex under a few inches of water Sunday.

Firefighters said they helped evacuate 18 homes and performed several rescues after Henri dumped about 5 inches of rain in town, the highest total in the state.

"It was a tragedy that this happened because the people who live here are people who can ill afford to live anywhere else," said Landry, a 72-year-old retiree whose second-floor home was spared from the flooding from the overflowing Hop Brook. "It has never been this bad. I’ve lived here 40 years."