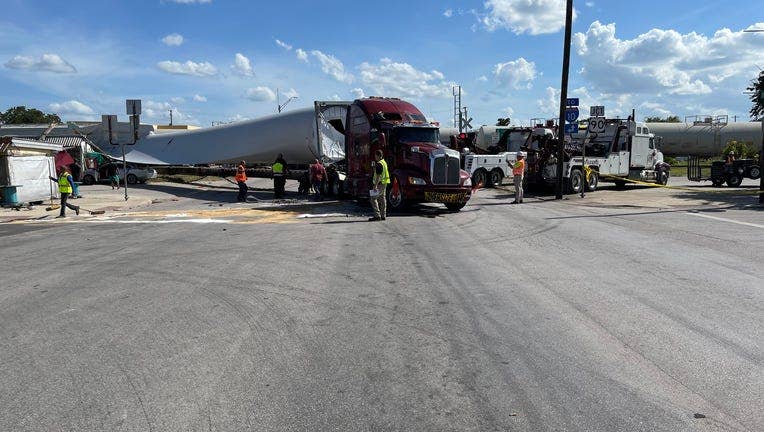 LULING, Texas - A freight train barreled through a semi-truck that was carrying what appeared to be a piece of a wind turbine as the 18-wheeler drove over the tracks at a rail crossing in Texas on Sunday.

The crash happened just after 2:30 p.m. in downtown Luling, a city located about 50 miles south of Austin.

Police said the crossing was clear when the truck attempted to pass but that the gates came down before the vehicle could fully clear the tracks, FOX7 Austin reported.

Bystanders at the scene captured video of the 18-wheeler crossing the tracks when the gates drop down on top of the vehicle. The freight train crashes through the truck’s bed, which appears to be hauling the blade of a wind turbine, resulting in the truck’s cab overturning.

Police said no one suffered injuries in the incident, FOX7 reported. It was not immediately clear to what extent the freight train was damaged.

A woman who said she was the truck driver’s wife responded to video posted on Facebook. She wrote that to her understanding, "it was a tight squeeze" through the downtown intersection with the large blade, and the front pilot driver exited his vehicle to make sure the truck could clear the area.

She said there were no flashing lights or bars down when they started to cross the tracks, and had no way of knowing that a train would be coming. When they were alerted to the oncoming train, the pilot driver jumped into his vehicle to move it while her husband attempted to move the 18-wheeler.

"We are giving God the glory that there was (sic) no injuries!" the woman wrote.

Luling police and the Union Pacific railroad police are investigating the incident.

Police are asking for help identifying a suspect accused of stealing over $800 worth of merchandise from a Menomonee Falls Target.

The Generac employees will be providing needed services in some of the areas hit hardest by Hurricane Ida.

A 21-year-old man was killed after a dispute over a haircut in Mount Pleasant.