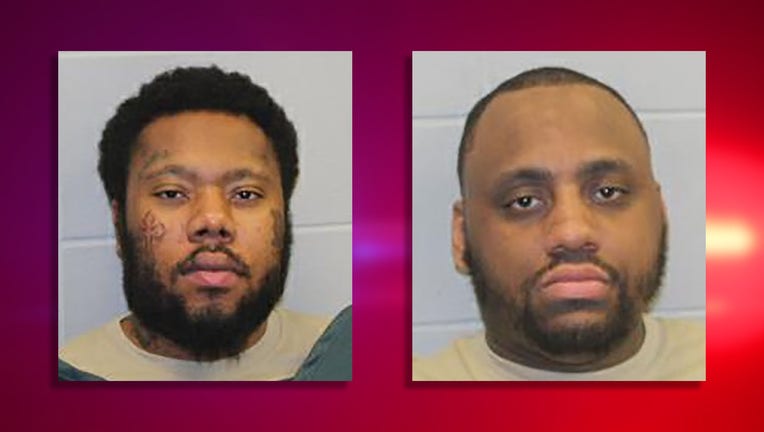 FOND DU LAC, Wis. - Two Fond du Lac men have been charged in connection to a 2021 homicide and alleged robbery.

Prosecutors accuse 28-year-old Eric Perry and 22-year-old Julius Freeman of both first-degree intentional homicide and armed robbery with use of force as parties to a crime.

Fond du Lac police were called to a home near 8th and Lexington the night of Oct. 17, 2021. The victim, a 26-year-old man, was dead at the scene with an apparent gunshot wound to the head.

A criminal complaint states a witness awoke and saw two people she did not know running out of her house and found the victim "in a pool of blood." The witness said the two people got into the backseat of a green SUV that drove off.

Investigators determined the victim had a gun and more than $600 cash at the time of his death. After searching the home, however, the gun and cash were not found.

Three days after the sooting, on Oct. 20, 2021, a woman reported a stolen gun to police. The gun in question was the one missing from the homicide scene, per the complaint. The woman said she had bought the gun with the victim at an Appleton sporting goods store. Surveillance from the store showed the woman and the victim together when the gun was purchased on Oct. 11 – six days before the homicide. As of May 24, the complaint states, the gun had not been found.

According to a criminal complaint, in the days after the shooting, police received reports from people saying "Lil E" or "Eric" – later determined to be Perry – was responsible for the shooting.

In January, police spoke to a man who told police he heard through "word on the streets" that Perry and Freeman were involved in the victim's killing. The witness said he spoke to Perry the night of the shooting, according to the complaint, and that Perry said he was looking to "hit a lick" – meaning to get money fast, usually by robbing someone.

Police asked a woman in February about a message she sent Freeman the day after the shooting asking about "pants that he bleached the blood off of." The woman said Freeman told her Perry shot the victim in the head, but she did not know if it was true, and that's how the blood got on his pants. She said she saw Perry wiping a gun down, and "figured something went down," per the complaint.

Police executed a search warrant at an address associated with Perry the week after the shooting. There, officers found $600 cash and noted the serial numbers on the bills.

During the investigation, the complaint states investigators found a Snapchat video recorded the night of the homicide. The video started with the victim placing $100 bills on a counter; based on the items and background seen in the video, the video was determined to have been filmed at the homicide scene.

Police went through some of Freeman's clothing as part of the investigation, which included several pairs of distressed jeans that looked bleached. One of those pairs "appeared to not have been distressed at the manufacturer." The pants had a "dirty brown area" and about a dozen "red stains." The jeans were sent to the state crime lab in Madison.

In April, the crime lab report on Freeman's jeans found two people's DNA. It found the victim was the "source" of a "major" component in samples taken from the jeans' red stain. The second person's DNA was deemed "not suitable for comparisons."

Warrants for Perry and Freeman's arrest were issued on July 1, both of which were canceled on July 8, and they were taken into custody. Both men are scheduled to make their initial court appearances on July 11.