A state of disaster has been declared in Dallas County after a day of intense, deadly rainfall. High water rescues happened again and again as many parts of North Texas received record rainfall with vehicles being left stranded and people stuck in their homes.

DALLAS - A state of disaster has been declared in Dallas County after a day of intense, deadly rainfall.

After a bone-dry summer, in one day, this became the second-wettest August on record, nearly breaking a 24-hour rain total record and triggering deadly flooding.

Along 635 in Mesquite between Military and Scyene, drivers were swallowed by rising water on the freeway and the road below.

Tanya Tyra her mother, Gail McKiernan and her dogs were trapped in their car. A man with a rope pulled them out of danger.

"They got me first because it was all the way up to my nose," McKiernan recalled.

Flooding in Dallas County sweeps cars off of roads, rescue crews save people trapped in homes

Dallas Fire-Rescue responded to more than 190 high water calls on Sunday and Monday.

As Dallas Fire-Rescue wrapped a news conference with its swift water rescue unit, calls from help were coming in.

In Southeast Dallas along Hwy 175 Denmark, Jerry Richardson was brought out of his house.

"It's about over a foot I guess that’s in the house," he recalled.

And while paramedics were with Richardson, Lisa Emmons approached asking for help because she couldn't reach her mother and father who were at the end of the flooded street. 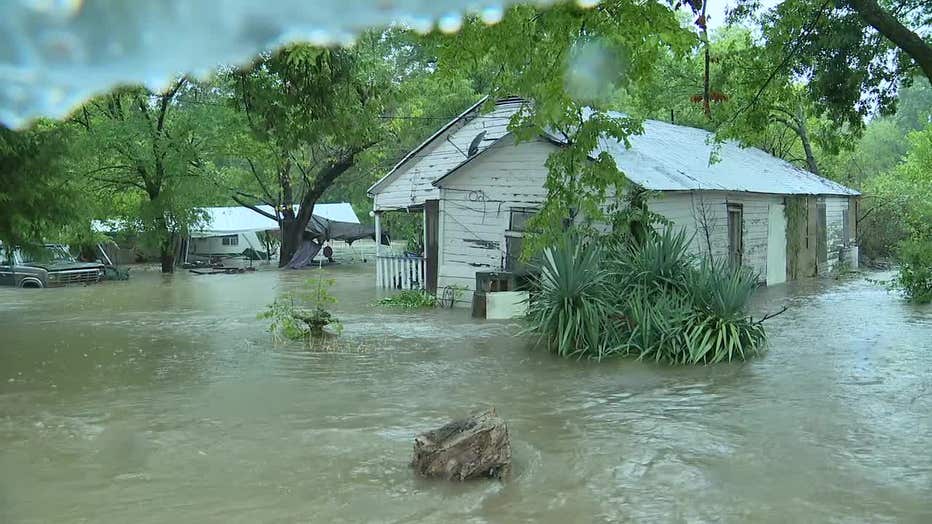 "They've been in a flood before, but it hasn't been this bad in probably 15 years," she said.

The swift water team put the boat in the water. Some folks walked out with bags of belongings.

Dallas Fire-Rescue got to Emmons’ parents and took them to paramedics.Downtown Dallas and East Dallas were hit especially hard. Fort Worth and Ellis County also saw some flash flooding.

A FOX Weather crew working in Downtown Dallas helped rescue a woman who drove into high water near I-35 and Hi Line Drive. She said she did not see how deep it was.

The water has since receded some but is still dangerous in other places like near Interstate 35 and Hi Line Road.

FOX 4’s Shannon Murray drove up to that area just as a FOX Weather crew rescued a woman who had driven into high water.

"As soon as we pulled up, we saw her slowly sinking into the water. She couldn’t get out, couldn’t stop the vehicle. She lost control. She said she did not see how deep it was and didn’t realize that she was pulling into such deep water. She couldn’t see because it was dark and there were no barricades," Shannon said.

That’s when FOX Weather reporter Robert Ray ran out to the car, pulled the woman out of the window and carried her to safety.

Many people on their way to work early Monday morning ended up in a traffic nightmare. FOX 4's Tisia Muzinga talked to one many who will be filing an insurance claim after flooding out.

A lot of people on their way to work early Monday morning got caught in heavy rain.

Flooding brought traffic to a standstill on Malcolm X Boulevard near Interstate 30, east of Downtown. Several cars and trucks ended up stuck in the water. Drivers had to get out and wait for help on the side of the road.

"I kinda felt something was off when all the water was rushing to the side. When I saw the traffic was stopped up here, I ended up in the far-left lane at the front and that’s when I got kinda swept away by the water," he said.

Drivers had to get out of their cars and wait for help because of flooding near I-30 and Malcolm X Boulevard in Dallas.

Williford was driving to work at the airport around 2 a.m. but ended up swimming out of his car. He said he’s thankful to be alive but not looking forward to calling his insurance company.

With the rain still coming down, law enforcement officials are urging people to slow down, plan for a longer drive or work from home if possible.

Dallas Fire-Rescue says between 6 p.m. on Sunday and 1:37 p.m. on Monday they responded to 195 high water incidents and 39 water rescues.

Flooded roads cause problems in Fort Worth

Dozens of homes have been evacuated in Fort Worth and Haltom City due to flooding.

Flooding made driving nearly impossible for many people in Fort Worth late Sunday night, especially near the intersection of Bledsoe and Norwood streets just north of the Farrington Field Stadium.

Flood water reached really high levels after midnight. It was up to car windows and higher.

Daniella Gonzales ended up trapped in a car she was a passenger in. She said the quick-rising water meant the vehicle wouldn’t move.

"It locked, the car shut down. It set itself on park. We tried to get it out. We tried to push it out," Daniela Gonzalez said. "All the water came rushing in, so we had to kind of swim out the car, grabbed our belongings. All our shoes are gone."

Pickup plows through water amid Flash Flood Warning in Fort Worth

Video shows trucks driving through flood waters on Crockett Street in Fort Worth. It happened as the National Weather Service issued a Flash Flood Warning for Tarrant County. More than 8 inches of rain fell in parts of North Texas. Credit: @weis_man via Storyful

Ganzalez said it all happened within about 10 minutes. Several cars got stuck.

The car she was in had to be pushed off the street because it no longer runs.

Fort Worth police said between 8 p.m. Sunday and 5 a.m. Monday, it responded to 53 calls related to water emergencies. There were no injuries in any of the incidents.

Areas across North Texas are dealing with damage due to strong storms Sunday night and Monday morning. More rain is expected to head our way this week.

FOX 4 Meteorologist Evan Andrews said things were pretty scary between 2 and 4 a.m. Things have gotten a little bit better since then, but there is still rain in the forecast.

According to the National Weather Service, a Flash Flood Warning is still in effect for Dallas County through 1 p.m. Additional warnings are in effect for Tarrant, Henderson, Ellis, Kaufman, Van Zandt and Rains counties.

And the back edge of the system could still drop several inches of rain across North Texas throughout the morning. The heavy rain will shift south in the afternoon, and then it will be patchier.

The high temperature may not even reach 80 degrees for the day.

Both DFW Airport and Love Field are dealing with cancellations and delays.

Weather and a power outage impacting four American Airlines gates canceled more than 250 flights in and out of DFW on Monday and delayed more than 900 others, according to Flight Aware.