ST. PETERSBURG, Fla. - A Russian foreign agent has been indicted by a Federal grand jury in Tampa for running a "brazen influence campaign, turning U.S. political groups and U.S. citizens into instruments of the Russian government," according to the FBI.

Over the course of seven years, from 2014 to July 2022, the FBI says Aleksandr Ianov of Russia's Federal Security Service, or FSB, set up his base of operations in St. Petersburg, Florida with the Uhuru Movement, where he coordinated and executed a campaign to fund and influence U.S. politics and sow discord surrounding elections and government.

During a press conference, U.S. Attorney for the Middle District of Florida Roger Handberg outlined the 24-page indictment which was unsealed Friday morning.

Among the allegations in the indictment, the FBI says Ionov:

A Russian foreign agent was involved in spreading false information and influencing city politics in St. Petersburg, Florida, according to the FBI. Officials did not specify which local political group was involved.

The indictment names some specific instances when Ionov allegedly acted on behalf of the Russian government, including allegedly sending electronic messages supporting the Russian Olympic team in 2016 after it was disclosed that Russian athletes took part in a state-run doping campaign.

He also allegedly spread online propaganda about "genocide" of Africans in the U.S. and worked with unidentified political candidates to spread support for messaging about "reparations."

Operation extends from Russia to Florida

In a video posted on Youtube by "The Burning Spear TV," which claims to be "The online voice of the International African Revolution," and posts videos based in St. Petersburg, Florida, a man named Alexander Ionov appears with members of the Uhuru Movement.

Hosting the online forum-style conversation is Eritha ‘Akile’ Cainion, who ran for St. Pete mayor and now says she is the "director of agitation and propaganda for the African People's Socialist Party."

She introduces Ionov as the "president of the Anti globalization Movement of Russia." 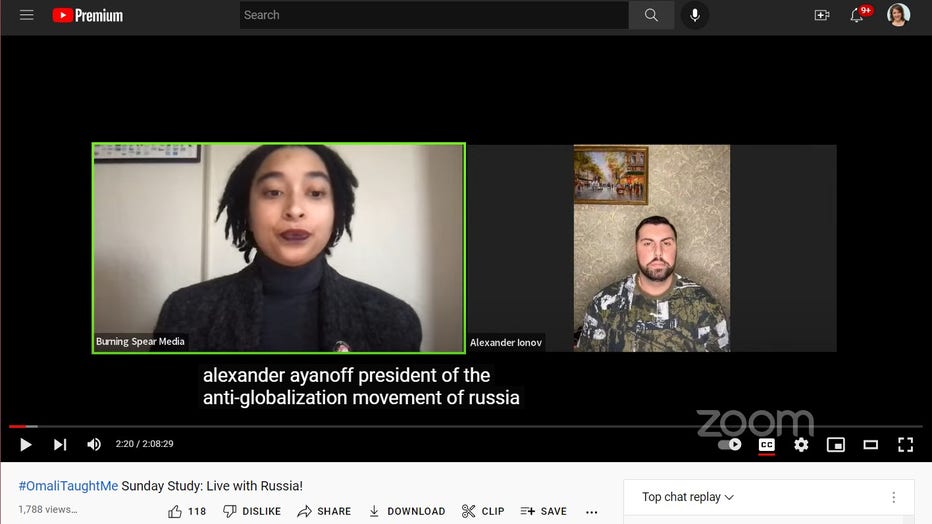 Federal officials have not released a photo of Ionov to the media.

The Uhuru group in St. Petersburg, Florida was parroting Russian talking points during the 2017 mayoral campaign.

The indictment says the secret agent encouraged members of the group to discuss "reparations." Based on information still available on the Uhuru website, this seems to be an accurate representation. 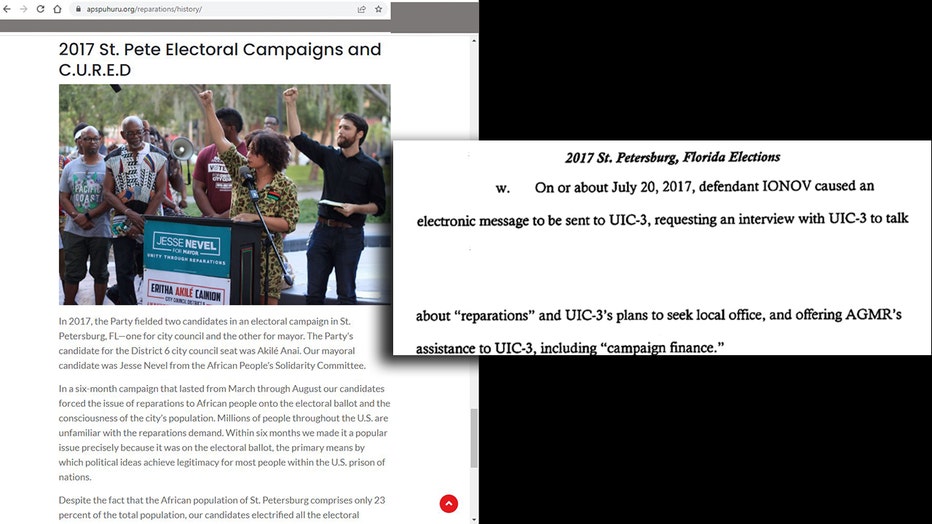 Kriseman reflected on the Uhuru talking points at the time: View the video on Twitter.

Neither Handberg nor the indictment specifically identifies the organization as the group in question.

After the press conference, members of the St. Pete Uhuru movement confirmed it was their group referenced in the indictment.

Eritha Akile Cainion, who ran for mayor and is now the leader of the St. Pete Uhuru group, led the press conference. Cainion defended Russia, saying the U.S. and other "world Colonial powers have been collaborating against Russia for well into the early 1900s."

Eritha ‘Akile’ Cainion led a press conference in response to the FBI indictment of Ionov. Cainion defended and promoted Russia, saying the U.S. and other "world Colonial powers have been collaborating against Russia for well into the early 1900s."

"The history of the African People's Socialist Party is to unite with any forces that unite with the anti-colonial struggle. And we feel that is a just struggle. What this is a propaganda campaign against Russia. We can have relationships with whoever we want," Cainion said.

During the same time, law enforcement officials were at the Uhuru house in St. Pete. 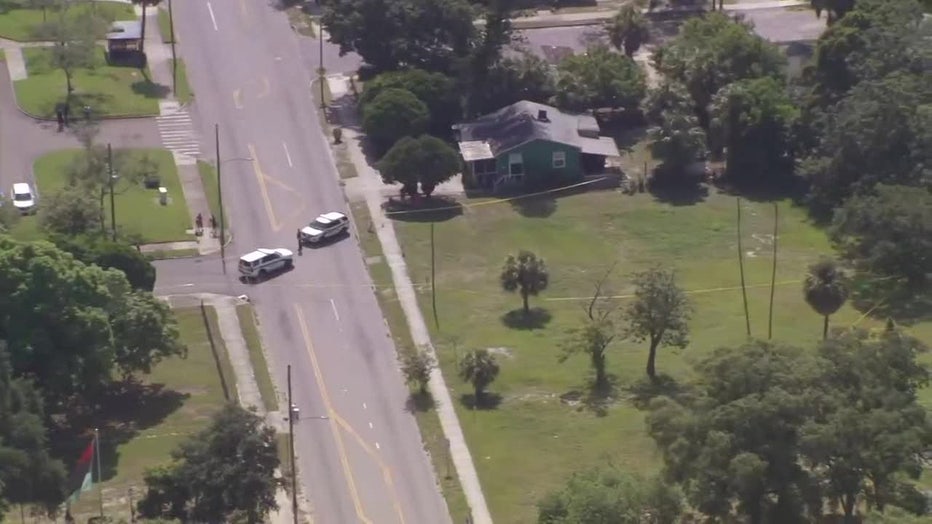 Friday in St. Petersburg, long strands of crime scene tape were draped around the Uhuru House in South St. Pete.

Despite the indictment leaving the Uhuru name out of writing, page 11 of the indictment says, "On or about August 26, 2015, UIC-2 caused US Political Group 1 to post a "Petition on Crime of Genocide Against African People in the United States" on the website Change.org and to promote the petition on its own news website.

The petition is still up on change.org, and was posted by International People's Democratic Uhuru Movement:

The petition charges "that the United States government has historically committed the crime of genocide against African people inside its borders, and continues to do so today, often with the complicity of many U.S. citizens. 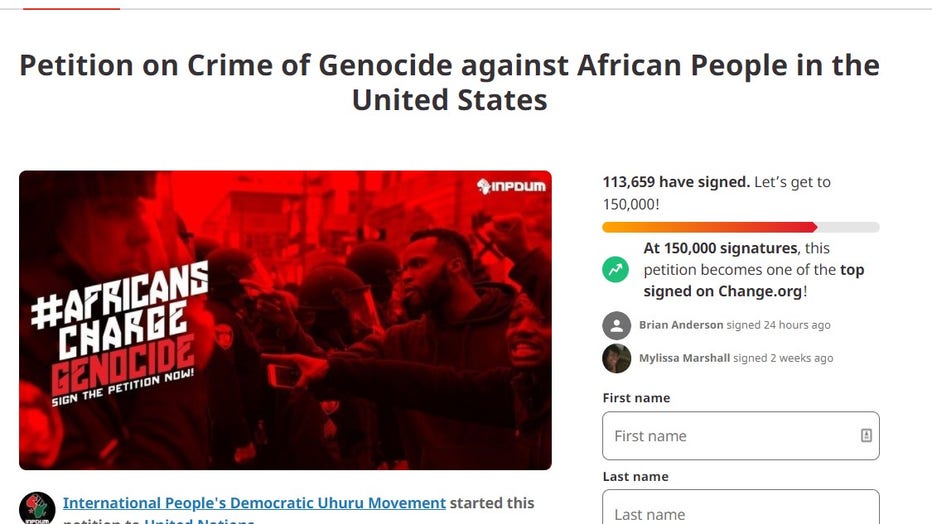 Screenshot of Change.org petition created by the St. Petersburg Uhuru movement, referenced on page 11 of the indictment

"Russia targets the United States and its allies as well as other countries to further that goal," Agent Handberg said. "It seeks to create wedges that create distrust in democratic processes."

There are similar allegations in Atlanta and Sacramento, but the indictment did not specifically name the political groups involved in those cities, either.

The Uhuru Movement is part of the African People’s Socialist Party, which says it is "uniting African people as one people for liberation, social justice, self-reliance and economic development."