The FBI has reclassified the 2017 congressional baseball shooter and would-be assassin as a "domestic violent extremist," ditching the much-maligned "suicide-by-cop" theory that those on the field had condemned as unrealistic.

"Our intelligence and law enforcement apparatuses require accuracy, precision, and justice. I’m encouraged that the FBI has updated its classification of that nearly catastrophic event to reflect the actual motives of the assailant, and I commend Director Wray for his oversight of that correction," Wenstrup said Saturday. "I will continue to work with the Bureau toward investigating what led to the original 'suicide by cop' determination."

RELATED: James T. Hodgkinson: Who is the Alexandria gunman who opened fire on congressmen?

The gunman, James Hodgkinson, fired well over 100 rounds at the congressmen, their aides and others present on the ballfield on June 14, 2017, after asking whether Republicans or Democrats were practicing there. 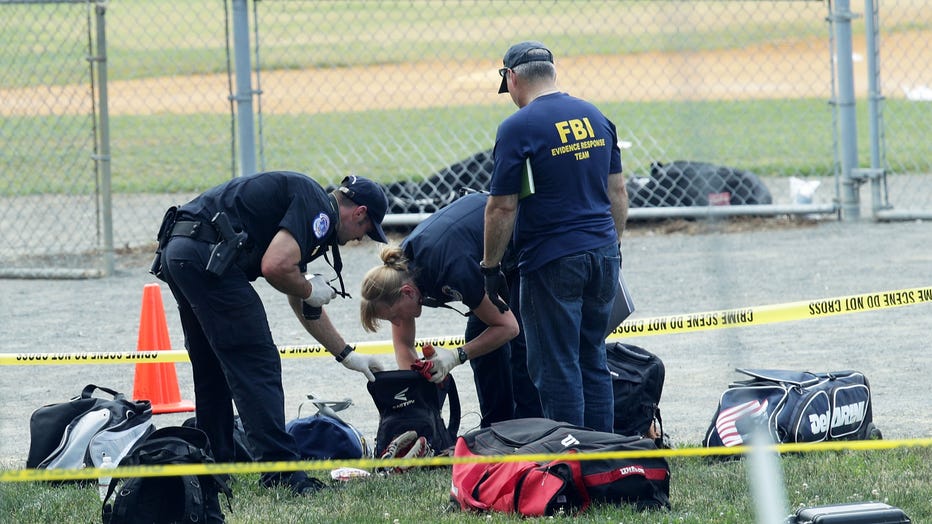 nvestigators search the bags that have been left behind at the Eugene Simpson Stadium Park where a shooting had happened June 14, 2017 in Alexandria, Virginia. (Photo by Alex Wong/Getty Images)

House Republican Whip Rep. Steve Scalise, of Louisiana, was severely injured in the shooting and nearly died. So was Matt Mika, a Tyson Foods lobbyist and also a coach for the GOP team.

Both condemned the classification after it became public, although survivors had been told it in a private FBI briefing months after the incident.

"I was shot by a deranged leftist who came to the baseball field with a list of congressional Republicans to kill," he told Fox News at the time. "This was not ‘suicide by cop.’ End of story."

Suicide by cop, Mika said, involves provoking the police. But the only police present were plainclothes officers in Scalise’s security detail, whom the shooter was not aware of.

RELATED: Witness captures video of shooting where US congressman, three others wounded

As Fox News has reported, Hodgkinson was a left-wing activist and former volunteer on Sen. Bernie Sanders 2016 presidential campaign who wrote numerous letters to the editor at his hometown newspaper and was vocal about his views on social media.

"He went there to kill Republicans, and he had a list of Republicans in his pocket," Scalise said. "He specifically asked if that was the Republican practice before he went back and got his guns and came out. He didn't know the security detail with me were cops, because they were plainclothes officers."

Wray was not the head of the FBI during the shooting. It was Andrew McCabe.

Wray had made no public comment after the April questioning, but Wenstrup said he believed the new director was open to taking a new look into the incident.