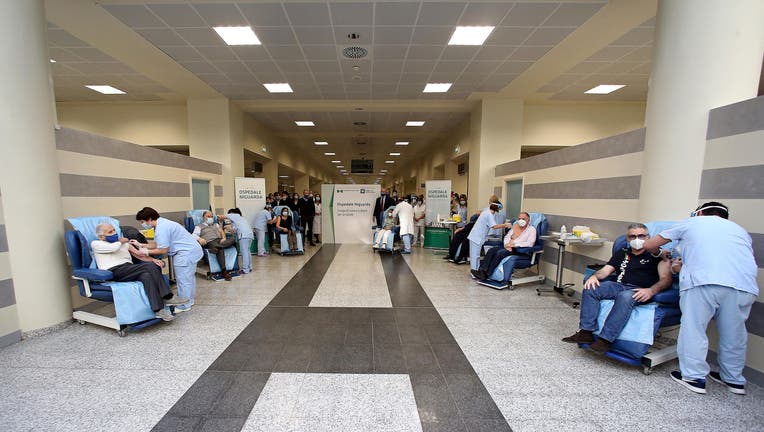 Silvio Angelo Garattini (L), Italian scientist and pharmacologist, president and founder of the "Mario Negri" Institute for Pharmacological Research, and other patients receive an injection of their first dose of the Pfizer-BioNTech Covid-19 vaccine

ROME - Doctors, nurses and the elderly rolled up their sleeves across the European Union to receive the first doses of the coronavirus vaccine Sunday in a symbolic show of unity and moment of hope for a continent confronting its worst health care crisis in a century.

Weeks after the U.S., Canada and Britain began inoculations with the same vaccine, the 27-nation bloc staged a coordinated rollout aimed at projecting a unified message that the shot was safe and Europe’s best chance to emerge from the pandemic.

For health care workers who have been battling the virus with only masks and shields to protect themselves, the vaccines represented an emotional relief as the virus continues to kill. But it was also a public chance for them to urge Europe’s 450 million people to get the shots amid continued vaccine and virus skepticism.

"Today I’m here as a citizen, but most of all as a nurse, to represent my category and all the health workers who choose to believe in science," said Claudia Alivernini, 29, the first person to be inoculated at the Spallanzani infectious disease hospital in Rome.

Dr. Anthony Fauci received the first dose of the Moderna COVID-19 vaccine on Dec. 22, stating he hopes it serves as a symbol to Americans about the shot's safety and efficacy.

Austrian Chancellor Sebastian Kurz called the vaccine, which was developed in record time, a "game-changer."

"We know that today is not the end of the pandemic, but it is the beginning of the victory," he said.

Within weeks, northern Lombardy became the epicenter of the outbreak in Europe and a cautionary tale of what happens when even wealthy regions find themselves unprepared for a pandemic. Lombardy still accounts for around a third of the dead in Italy, which has the continent’s worst confirmed virus death toll at nearly 72,000.

"Today is a beautiful, symbolic day: All the citizens of Europe together are starting to get their vaccinations, the first ray of light after a long night," Arcuri told reporters.

But he cautioned: "We all have to continue to be prudent, cautious and responsible. We still have a long road ahead, but finally we see a bit of light."

The vaccine developed by Germany’s BioNTech and American drugmaker Pfizer started arriving in super-cold containers at EU hospitals on Friday from a factory in Belgium. Each country was only getting a fraction of the doses needed — fewer than 10,000 in the first batches for some countries — with the bigger rollout expected in January when more vaccines become available. All those getting shots Sunday have to come back for a second dose in three weeks.

Ursula von der Leyen, head of the European Union’s Executive Commission, said with additional vaccines in development, the EU will have more shots than necessary this year and could share its surplus with the western Balkans and Africa.

"Europe is well positioned," she insisted.

In the Los Olmos nursing home in the Spanish city of Guadalajara, northeast of Madrid, 96-year-old resident Araceli Hidalgo and a caregiver were the first Spaniards to receive the vaccine.

"Let’s see if we can all behave and make this virus go away," Hidalgo said.

The Los Olmos home suffered two confirmed COVID-19 deaths and another 11 deaths among residents with symptoms who were never tested.

The Czech Republic was spared the worst of the pandemic in the spring only to see its health care system near collapse in the fall. In Prague, Czech Prime Minister Andrej Babis received his shot at dawn Sunday and asserted: "There’s nothing to worry about." Sitting next to him was World War II veteran Emilie Repikova, who also received a shot.

Altogether, the EU’s 27 nations have recorded at least 16 million coronavirus infections and more than 336,000 deaths — huge numbers that experts say still understate the true toll of the pandemic due to missed cases and limited testing.

The vaccination campaign should ease frustrations that were building up, especially in Germany, as Britain, Canada and the United States kicked off their inoculation programs with the same vaccine weeks earlier.

As it turned out, some EU immunizations began a day early in Germany, Hungary and Slovakia. The operator of a German nursing home where dozens were vaccinated Saturday, including a 101-year-old woman, said "every day that we wait is one day too many."

In France, where many question the safety of vaccines, the French government has been cautious in its messaging and keen to ensure that it is not seen as forcing vaccinations on the public. France’s first vaccination at a nursing home in a poor area outside of Paris on Sunday was not broadcast on live television as it was elsewhere in Europe and no government ministers attended.

"We didn’t need to convince her. She said ‘yes, I’m ready for anything to avoid getting this disease,’" said Dr. Samir Tine, head of geriatric services for the Sevran nursing home where France’s first shot went to 78-year-old Mauricette.

Among the politicians who got shots Sunday to promote a wider acceptance of vaccinations was Bulgarian Health Minister Kostadin Angelov. "I can’t wait to see my 70-year-old father without fear that I could infect him," Angelov said.

After he got his shot, Greek Prime Minister Kyriakos Mitsotakis declared Sunday "a great day for science and the European Union."

"We hope that, with time, even those of our fellow citizens who are suspicious of vaccination will be convinced it is the right thing to do," he said.

Meanwhile, a new virus variant that has been spreading rapidly around London and southern England has now been detected in France, Italy, Spain, Canada and Japan. The new variant, which British authorities said is much more easily transmitted, has prompted many countries to restrict travel from Britain.

Japan announced it would temporarily ban all non-resident foreigners from entering through Jan. 31 as a precaution against the U.K.’s new variant.

Germany’s BioNTech has said it’s confident that its vaccine works against the new U.K. variant, but added that further studies are needed.

The European Medicines Agency on Jan. 6 will consider approving another vaccine made by Moderna, which is already being used in the United States.

Dr. Annalisa Malara, who diagnosed Italy’s first domestic case on Feb. 20 that confirmed Europe’s outbreak was underway, was on hand at her hospital in Codogno to encourage all Italians to get the shot.

"Today we close the circle a bit that was opened on Feb. 20," she said.

AP journalists from around Europe contributed to this report.