As tradition dictates, bagpipes were playing as a casket containing the body of 29-year-old Chicago Police Officer Ella French was carried by her fellow officers Thursday.

CHICAGO - As tradition dictates, bagpipes were playing as a casket containing the body of 29-year-old Chicago Police Officer Ella French was carried by her fellow officers Thursday.

Hundreds of squad cars from Chicago, the suburbs and all over the country lined up on Western Avenue to take part in the procession.

A sea of officers in their dress blue uniforms formed outside St. Rita of Cascia Shrine Chapel as mourners — including Mayor Lori Lightfoot, former Mayor Richard M. Daley, and top department officials and friends and family — filed slowly inside to remember French.

Cardinal Blase Cupich led the traditional Catholic funeral mass, and spoke in his homily about the difficulty of policing — urging officers not to get discouraged by anti-police sentiment in the country.

Officer French's mother and Officer Joshua Blas, French’s third partner that night who tried to save her life, spoke as well.

"Ella was so proud to be a member of your family," said Elizabeth French. "Every day you leave home to serve and protect."

"She was loud and fun and outgoing," said Blas. "She always loved getting to know the people and talking to them. She was bubbly and always smiling…Ella, you’re a great police officer, friend and partner. Thank you for all the great memories. I miss you."

French was gunned down during an Aug. 7 traffic stop in West Englewood.

She served for three years on the police force.

As tradition dictates, bagpipes were playing as a casket containing the body of 29-year-old Chicago Police Officer Ella French was carried by her fellow officers Thursday.

French's brother, Adam, said she "wanted to do good for the world."

"… My sister is a bada—. She always wanted to make a difference … however it was possible. I was never surprised when she said she was going to be a sheriff and then a cop. It just made sense," Andrew wrote in a message to the Sun-Times.

Chicago Police Officer Ella French will be laid to rest today in Chicago.

French's partner, Carlos Yanez Jr., was also shot and critically wounded during the traffic stop gone wrong. He released a video from his hospital room Wednesday.

The shooting sent shockwaves across Chicago.

"They go down dark alleys none of you would go down, to protect you," Brown said. "They run toward bullets." 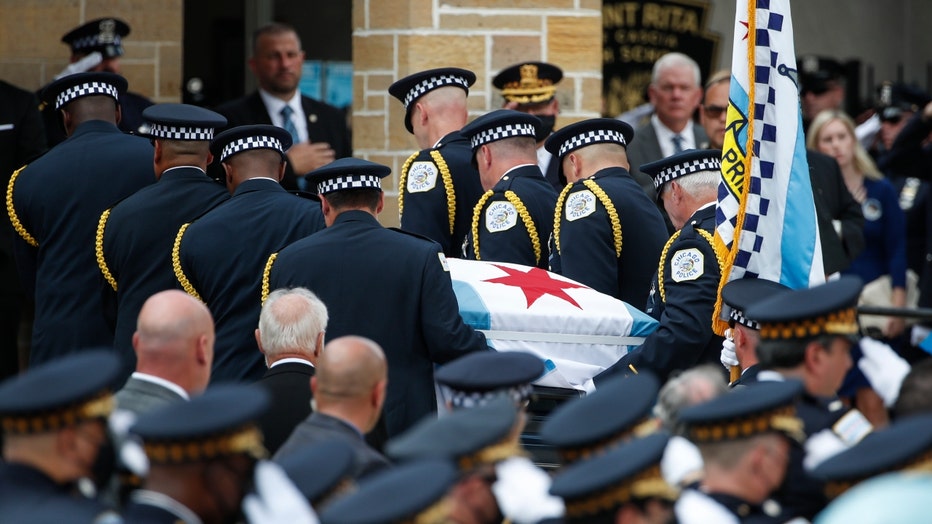 Draped with a city of Chicago flag, the body of Chicago Police Officer Ella French is carried into the St Rita of Cascia Shrine Chapel for the funeral service on August 19, 2021 in Chicago, Illinois. (Kamil Krzaczynski/Getty Images)

Yanez’s father, a former Chicago cop, also spoke during the funeral and said his son only learned of French’s death two days ago.

"He sank into such sorrow," said Carlos Yanez Sr. "And if you know my son, he’s the happiest guy in the world all the time. But I’ve never seen him so sad and in pain."

Two brothers have been charged in the shooting.

A third man accused of acting as a straw purchaser to buy the gun that was used to kill French faces federal gun charges.

Prosecutors say the brothers' car was pulled over for expired plates. They say three officers approached the car and the situation exploded after the younger brother — accused shooter Monte Morgan — refused to cooperate and became unruly.

It was a day of mourning in Chicago. A police officer with just three years on the force was shot in the head and killed Saturday night.

"Monte Morgan exited that vehicle with a drink in one hand and a cell phone in the other. He refused repeated instructions to set those items down," said Risa Lanier, Interim First Assistant State's Attorney. "He began physically jerking his arms away from those officers."

Moments later, Lanier says Morgan pulled a .22 caliber handgun from his waistband and fired several shots, hitting and killing French with a single shot to the head, and hitting Yanez in the shoulder and the right eye.

Outside court, prosecutors said the initial responding officers "had their own guns holstered the entire time" of the incident. Monte Morgan was later shot and wounded by a second group of officers who were called for backup.

French had recently purchased a new home in the Parkview neighborhood on the Southwest Side in June, records show.

Her neighbor, who identified himself only as Johnny R., was shocked to learn the fallen officer from recent news reports was the same "decent person" who lived next door to him.

"That … breaks my heart right there," Johnny, 62, told the Chicago Sun-Times. "She literally just moved in.

The Sun-Times Media Wire and The Associated Press contributed to this report.