Alcohol guidance from the CDC

Alcohol can have very dangerous long-term effects on a person's health if abused.

An online campaign is aiming to bring awareness about the increased risk of developing cancer — particularly breast cancer — from drinking alcohol.

Breast cancer is the second-most common cancer in women after skin cancer, according to the National Institutes of Health. There have been an estimated 281,550 new cases diagnosed in 2021, roughly 14.8% of all new cancer cases in the U.S.

And while research shows that a majority are aware of the link between family history and risk of developing breast cancer, just 25% of U.S. women surveyed were found to be aware of the heightened risk from drinking alcohol.

October is Breast Cancer Awareness Month, prompting some alcohol companies to tint their beer pink or display pink ribbons on rose bottles in an effort to promote the cause. But a campaign called Drink Less for Your Breasts by the Alcohol Research Group (ARG) at the Public Health Institute aims to point out the missed connection.

The American Cancer Society notes on its website that alcohol accounts for about 6% of all cancers and 4% of all U.S. cancer deaths. It states that drinking even small amounts of alcohol is linked with an increased risk of breast cancer in women, citing how alcohol can raise estrogen levels in the body — which may explain some of the increased risk.

The amount of alcohol someone drinks over time, and not the type of alcoholic beverage, seems to be the most important factor in raising a person’s cancer risk overall, according to the American Cancer Society. 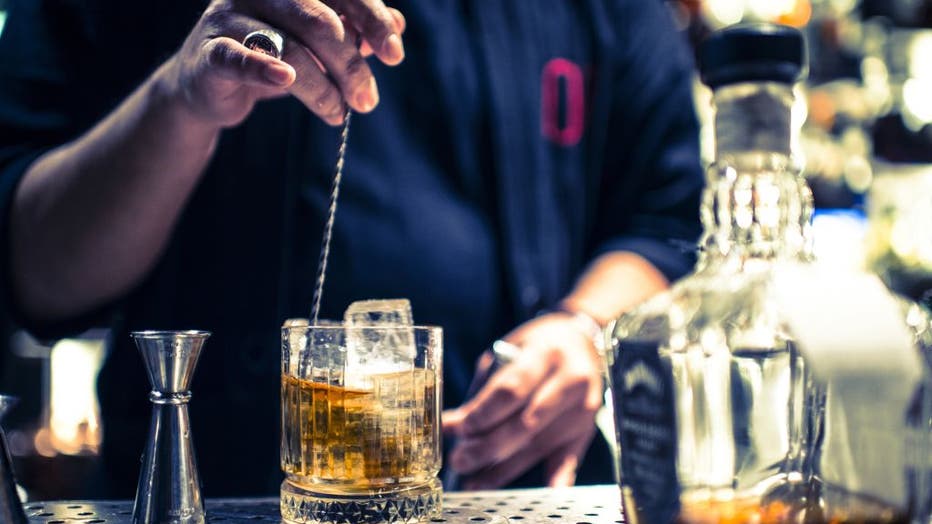 FILE - A bartender makes a drink at a cocktail bar in Milan, Italy. (Photo by: De Simone Lorenzo/AGF/Universal Images Group via Getty Images)

"No matter how much alcohol or what kind of alcohol you drink, if you were born female, alcohol increases your risk of breast cancer. Full stop. No arguments," the Drink Less for Your Breasts campaign states on its website. "Even if you drink small amounts. And while the risk isn’t huge at small amounts, it increases the more you drink, and that risk can add up quickly."

Based on more than 100 related studies, the campaign estimates that one alcoholic drink per day over time can increase a woman’s breast cancer risk by approximately 14%.

The organization behind the campaign notes that females everywhere are at risk for developing breast cancer simply because of their gender, as well as other factors like having a family history of breast cancer. But it stresses that heavy drinking only heightens that risk.

October raises awareness for Breast Cancer and LiveNOW from FOX talks with a doctor about the advances in treatments and importance of early detection.

The campaign highlights that while there are things a person cannot control, like being born female or genetics, the amount of alcohol a person consumes in their life is something they can control.

"We’re not saying give up alcohol completely, although if you do do that, we applaud you," the campaign states. "We’re just saying, drink less for your breasts. They’ll thank you for it."

RELATED: Study: Wine is only alcoholic drink with health benefits — and it may just be the grapes