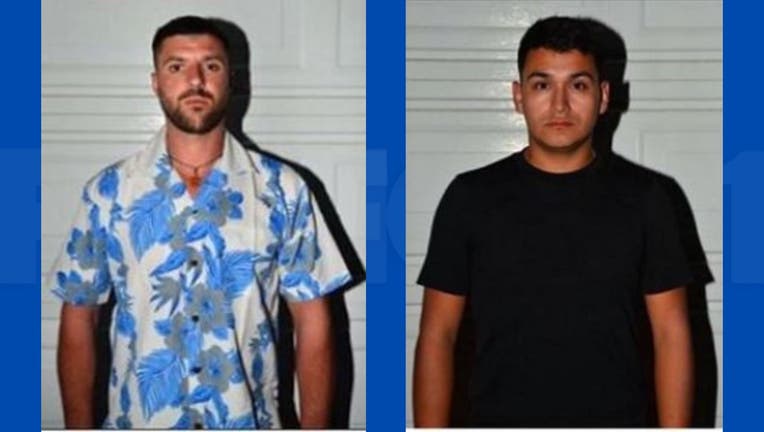 HONOLULU - A 23-year-old man allegedly killed his 73-year-old lover, tried to make it look like a suicide, poured cement over his body in a bathtub and planned to fraudulently take ownership of his car and home in one of Hawaii’s most exclusive gated communities, police said in court documents filed Friday.

Juan Tejedor Baron is charged with murder, theft and identity theft in the death of Gary Ruby, whose decomposing body was excavated by authorities earlier this week from a standalone soaking tub in Ruby’s Hawaii Loa Ridge home.

U.S. Marshals and Los Angeles police arrested Baron after finding him in a crawl space at the back of a Mexico-bound bus in Anaheim, California. He was being held without bail pending extradition to Honolulu, and it wasn’t clear if has an attorney.

According to a Honolulu police affidavit, Baron told a Los Angeles police detective he became angry with Ruby after sex.

"Baron stated that soon after, he noticed Gary choked on food, and Baron reacted by placing a belt around Gary’s neck and tightening the belt until Gary lost consciousness," the affidavit said.

He allegedly dragged Ruby to a bathtub and used a kitchen knife to stage a suicide, then filled the tub with concrete he found in the garage, the affidavit said, but that only partially covered the body.

So Baron drove to a home improvement store and purchased four additional bags of concrete to fill the tub, the affidavit said, and "he used coffee grounds to cover the cement in an effort to conceal the smell of decomposition." The court documents don’t specify when the murder allegedly took place.

Baron allegedly forged ownership papers to obtain the title to Ruby’s 2020 Audi on Feb. 7, the affidavit said, and planned to acquire his home. According to property records, Ruby purchased the house in 2002 for nearly $2.2 million.

Honolulu police said they got a call Monday from Ruby’s brother, who hadn’t heard from him in three weeks. Ruby’s last email to his brother mentioned he had "met a new love interest named Juan" who was significantly younger.

Two officers went to the house, where Baron told them he bought the home from Ruby five years ago. Baron changed his story, saying he bought it two years ago, after police told him Ruby bought it in 2020, the affidavit said. Baron claimed to have the deed to the house.

The operations manager for the gated community told police that on Monday, Baron arrived at the main office to register as the new owner of Ruby’s house, the affidavit said, and that the manager received an email from Ruby’s documented email address with the deed paperwork but no notary or signature on it.

On Tuesday, police, a medical examiner investigator and a forensic pathologist entered the home and found the cement-and-coffee-covered tub in the master bathroom with Ruby’s body at the bottom of the tub.

Soon after Baron was captured Wednesday, Marshals and Los Angeles police arrested a 34-year-old man who Honolulu police had seen leaving Ruby’s house when they spoke with Baron earlier in the week.

The 34-year-old man was later released after it was determined he wasn’t involved in Ruby’s death, Honolulu police said.