'It had to be God': Dallas school bus driver, bus monitor help save kids from floodwater

A Dallas ISD bus driver and bus monitor credit divine intervention with helping them save two children who were caught up and nearly swept away by flooding.

DALLAS - A Dallas ISD bus driver and bus monitor helped save two children who were caught up and nearly swept away by flooding.

They said they normally wouldn't have taken the route they took that day, adding that it must have been divine intervention.

Tekendria Valentine, the bus monitor, shot the incredible video of the rescue.

They tied seatbelts together to save the kids, who were hanging on to trees during the flooding in southeast Dallas County.

A Dallas ISD bus driver and bus monitor helped save two kids who were being swept away by floodwater by tying together seat belts from their special education bus.

Neighbors also rushed to help pull the boy and girl to safety.

It was some heroic actions from all involved.

"It had to be God to send me that way because I don’t normally go that way," Simone Edmond said.

Edmond has been a Dallas ISD bus driver for 22 years.

"I’m just happy we got them out. It was super crazy though," Valentine added.

Valentine has been with the district for two years.

The two just started working together two weeks ago.

"We never even met each other before," Edmond said.

The bus was empty when they were called to pick up a student who missed their bus Monday morning.
The student isn’t normally on their route, so they were driving in a different area than usual.

They never suspected what was around the corner.

They saw two siblings, a boy and a girl, were stuck in floodwater near Belt Line and the CF Hawn Freeway. Their father was trying to help them.

"The little boy was yelling out, ‘Help, help,’ and I’m like, ‘Oh, they’re stuck,’" Valentine said. "But then we started thinking like, maybe we can tie the seat belts together and, you know, like help them."

Their bus is for special education students.

It’s equipped with removable seat belts to strap in wheelchairs.

Edmond and Valentine tied those straps together.

Neighbors came to help, and they collectively pulled the kids to safety. 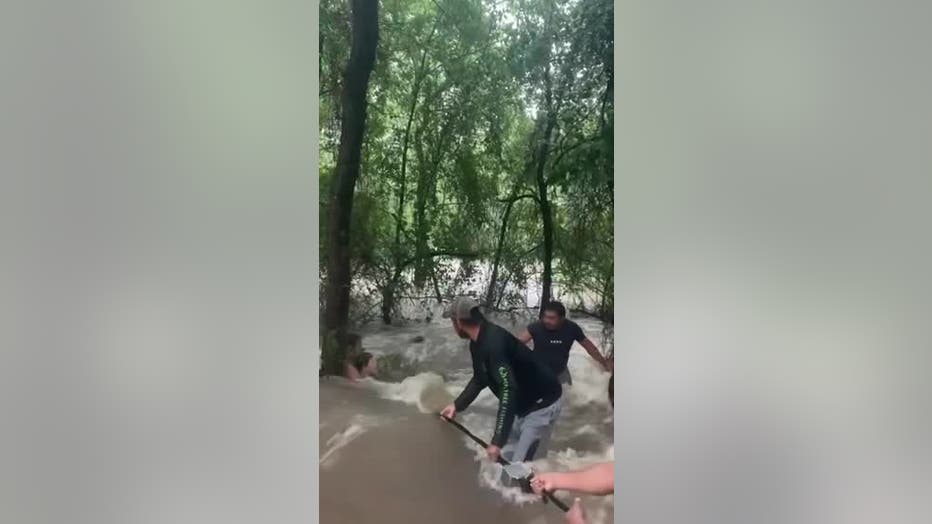 "She was holding me up here, and I was holding this and I had another guy wrapped in my arms. We were holding like this, and we just extended the tie downs out until we could reach the people and pull them in," Edmond recalled.

Edmond and Valentine said they don’t know how to swim.

"That’s the thing, we don’t know how to swim and we were like taking a chance ourselves," they said.

"To be honest, I got a little emotional about it because it was really inspiring," said Dr. Angel Vales, with Dallas ISD. "I mean, it just shows the commitment our bus drivers and monitors have in the district."

Edmond and Valentine still don’t know who the kids they saved are, but they believe a higher power brought them together.

"We just saw them just walk in the house like nothing happened," Valentine said.

"Like I said, it had to be God to send us that way and to make us think because we knew they needed help," Edmond said.