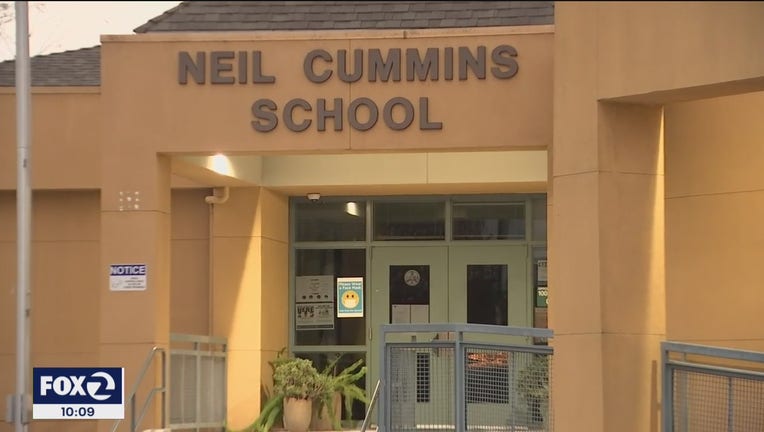 MARIN COUNTY, Calif. - A COVID outbreak at an elementary school in the North Bay stems from a student who went to school while infected with the novel coronavirus.

On Friday, KTVU obtained a statement from Marin Health & Human Services that acknowledges a Marin County family broke with COVID protocol when their student, who had tested positive for COVID, attended school during their infectious period.

The health department says for the privacy of the families and all involved, they are not releasing further details. However, Marin Independent Journal first reported that a COVID outbreak is affecting at least eight children at Neil Cummins Elementary School.

Larkspur-Corte Madera School District Superintendent Brett Geithman confirmed the newspaper report that as many as 75 people are in a modified quarantine as a result of the breach.

The school found out about the breach Nov. 18. Two classes were tested on Nov. 19, followed by a third class, which was added to the modified quarantine.

The modified quarantine, something the district has worked with the health department on, involved no travel, gatherings, or group activities over a 10-day period that included the Thanksgiving break.

Marin County Public Health said they have identified all affected student families and are working to prevent further transmission.

Geithman told KTVU, the parents of the student who was sent to the school along with a sibling after one of them tested positive, could face "corrective action."

"What we're really trying to focus on is asking everyone to act with integrity. Mitigating COVID takes us all," Geithman said. While he did not elaborate on what that action could look like for confidentiality reasons, he did say schools in Marin reopened in October 2020 and that this was their district's first case of school transmission.

Across the county, there have been 46 cases of in-school transmission, according to the health department. The health department said this is the only known occurrence of a household knowingly sending a COVID-19 positive student to school.

He said many students, including 93% of the district's middle schoolers are vaccinated and that numbers for K-6 students are still trickling in. He expects solid numbers in January, but is already seeing many from that age group have received their second dose of the COVID vaccination.

SEE ALSO: Google once again delays return to office, this time due to Omicron variant

This outbreak comes at a time of heightened awareness as the holiday season gets into full swing, seemingly on a collision course with the new omicron variant, which officially emerged as a variant of concern a week ago.

Editor's Note: In an earlier version of this story, we showed a blurred video of two children. The children shown are not connected to the family involved with the outbreak. We apologize for any confusion this may have caused.