President Biden renewed his calls for Americans to get the COVID-19 vaccine and for eligible citizens to get the Pfizer-BioNTech booster.

DES MOINES, Iowa - The rise of the delta variant and the beginning of the school year has dramatically increased the risks children face during the coronavirus pandemic, a group of pediatricians said in court documents submitted in the federal lawsuit against Iowa Gov. Kim Reynolds.

The American Academy of Pediatrics and its Iowa chapter filed a brief Tuesday with the federal court judge who is considering the lawsuit 11 parents of Iowa children and the disability rights group The Arc of Iowa filed last week. It seeks to strike down a Republican-passed measure that Reynolds signed into law in May that prohibits school boards from imposing mask mandates in schools.

The AAP said in the document filed with the court that their review of the research and the experiences of the front-line pediatric practitioners "prove beyond any doubt that universal mask policies in schools significantly reduce the spread of COVID-19 in school populations." The group said the prevalence of pediatric COVID-19 has skyrocketed since the school year began, with 20% of all child cases since the beginning of the pandemic diagnosed between Aug. 13 and Sept. 16.

"This surge appears to be due to two principal factors: the resumption of in-person schooling (and particularly schooling in places without masks), and the emergence of the delta variant, which is more than twice as contagious as previous variants," the AAP said in the court document. 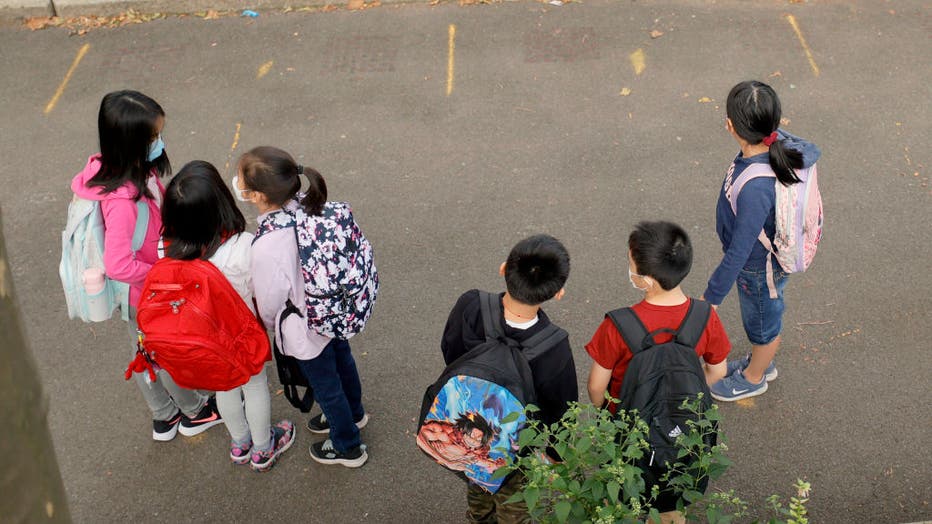 FILE - Students line up in the morning at a school on Sept. 27, 2021, in New York City. (Photo by Michael Loccisano/Getty Images)

The document said more than 5.5 million child COVID-19 cases have been reported in the United States as of Sept. 16, which is more than 15% of total cases in the country. Iowa has reported more than 56,000 child cases, the group said.

The testimonial challenges Reynolds’ longstanding opposition to mask mandates. She has questioned the effectiveness of cloth masks in schools and has suggested they may cause harm, saying parents should decide whether to mask their children.

The AAP said the state's claims that masks are harmful to respiratory function, to children’s social or language skills, or for children with anxiety lack any scientific basis.

The AAP said more than 3,200 children were hospitalized due to COVID-19 between Aug. 13 and Sept. 16 among 24 states and one city reporting child hospitalizations. That data coincides with reporting from Iowa hospitals that more children have been admitted for treatment of COVID-19 in recent weeks. Data released by state public health officials Wednesday indicated cases of COVID-19 in children age 17 and younger made up 24% of new positive virus cases in the state in the past week. Ten children age 11 or younger were hospitalized with the virus.

COVID-19 child hospitalizations rising: Specialist says 'I am as worried today about our children as I have ever been'

The AAP said since the beginning of August, more children have died each week than in all but one previous week of the pandemic. Nationally, among the 45 states, New York City, Puerto Rico and Guam reporting data, 498 children have died. The group's data shows three children have died in Iowa from COVID-19. Texas leads the nation in child deaths from the virus with 79 and Arizona has had 38.

Judge Robert Pratt issued a restraining order on Sept. 13 against Reynolds and Iowa Department of Education Director Ann Lebo to prevent them from enforcing the law. He concluded that the law substantially increases the risk of several children with health conditions of contracting COVID-19 and may violate federal laws including the Americans With Disabilities Act.

He extended the order on Monday until Oct. 11 and is considering a preliminary injunction that would continue to halt enforcement of the law while the case works through the courts. Reynolds indicated she is determined to restore the law, saying she will appeal. At least 24 school districts have reinstated a mask mandate since Pratt issued a temporary restraining order.

All 99 counties in Iowa continue to see a high rate of virus spread, according to CDC data. The state Wednesday data update shows deaths from COVID-19 in Iowa increased by 81 to 6,563. The deaths occurred between Aug. 10 and Sept. 17, the state said.

The mask dispute is one of several playing out in school districts nationwide especially in Republican-run states that have prevented local governments from imposing mask requirements.

On Tuesday a federal judge in South Carolina overturned that state's ban on mask mandates and on Monday a judge in Arizona struck down Republican-passed laws that block schools from requiring masks and restrict the power of local governments to impose COVID-19 requirements.

RELATED: Pfizer submits data to FDA on COVID-19 vaccine in kids ages 5 to 11