RACINE, Wis. - A Racine County judge issues a reversal over a controversial high school wrestling call. The decision comes two years after the wrestler's father sued to keep his son's championship hopes alive. The governing body for high school sports in Wisconsin – the WIAA – calls it as a victory for sports officials.

In a high school wrestling match, there are three people on the mat. One of them has no fans.

"It's a thankless job," said Michael Arendt, a 20-year veteran referee and the official wrestling rules interpreter for the WIAA.

"I've had a number of things said about my mother that I know aren’t true," he said.

In 2019, Arendt found himself on the receiving end of a lawsuit over a controversial call he made toward the end of the Southern Lakes Conference Tournament.

"I’ve seen the video over and over again," Arendt said.

Already a state champion as a freshman, Waterford Union High School sophomore Hayden Halter was leading his conference title match 7 to 1 when the referee awarded one point to his opponent for an escape. It would have been a largely meaningless point, but for what happened next, as captured by a spectator's cell phone camera.

"What the hell is that?" a voice calls out from the crowd. The voice belonged to Shawn Halter, Hayden's father.

"Your opponent has to be free of you," the elder Halter told FOX6 News, as he recounted the call two years later.

Hayden didn't like it either. And the video shows him shrugging his shoulders, palms turned up in dispute.

Arendt says it was the profanity that prompted him to assess a penalty for unsportsmanlike conduct. Then, something else happened.

"He flexed to the crowd," Shawn Halter said.

"He flexed and yelled at the crowd," Arendt said.

"Turned toward an opposing crowd and flexed," Labecki said. 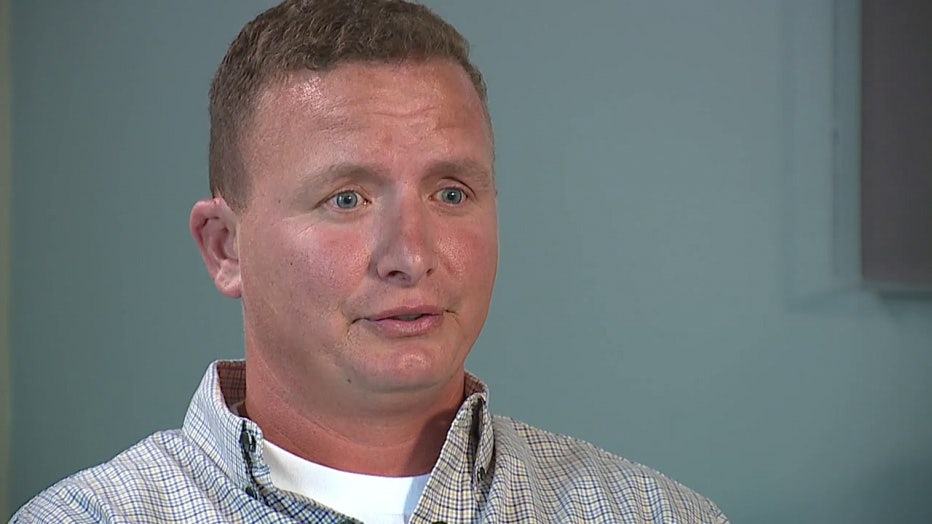 Shawn Halter says the lawsuit was not about the referee's decision, but about how WIAA applied the suspension, which would have cost his son a chance to defend his state title.

Just after the referee raised Hayden Halter's arm in victory, the young wrestler raised both arms in the air, flexed his biceps and grunted toward the stands. It was a brief display that his father described as "celebrating."

"There’s a bunch of emotions going through a kid," Shawn Halter explained.

The referee deemed it "taunting," and assessed a second penalty for unsportsmanlike conduct. That meant Halter was disqualified.

The implications were enormous.

"If you are disqualified from a tournament, you miss the next competition," said Labecki.

"If he couldn’t wrestle at regionals," said FOX6 Investigator Bryan Polcyn.
"He’s done," Shawn Halter said.
"This was the end of his chance to defend his state title," Polcyn said.
"Yep," Halter answered.

The elder Halter says he wanted to appeal his son's one match suspension to the WIAA, but could not get anyone at the association to return his or the coach's calls.

"We couldn’t even get a hold of ‘em," Halter said.

"We don’t second-guess the officials on that," said Labecki. "We will not review a judgment call." 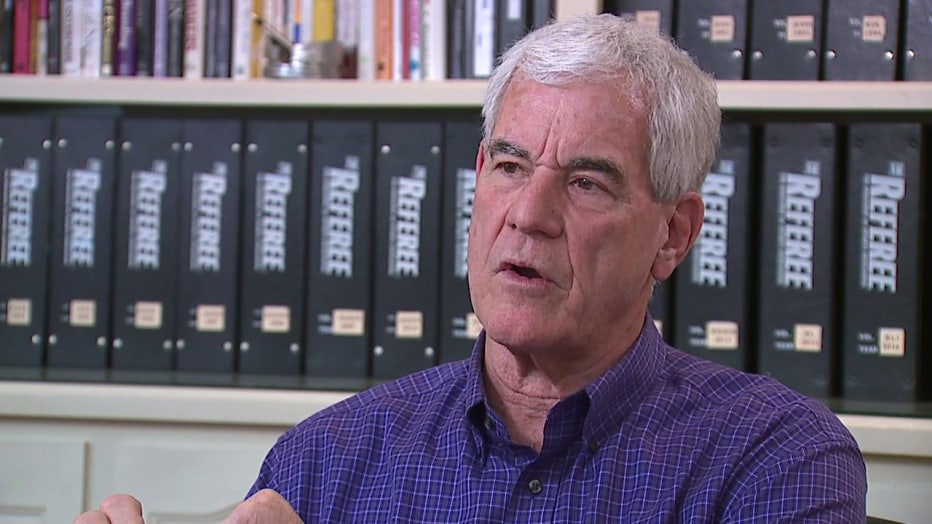 Barry Mano, President of the National Association of Sports Officials in Racine

Labecki says the best person to decide if halter was celebrating or taunting is the trained referee who witnessed the match in person.

"And I don’t doubt the two calls at all," Arendt said.

So he took the WIAA to court.

"I think that they’re opening up Pandora’s box," Labecki said.

Racine County Judge Michael Piontek is now retired and did not respond to our request for an interview, but during an injunction hearing six days after the match, Judge Piontek said he "heard no profanity" and "saw no taunting" on the spectator's video that was presented in court.

He then ordered WIAA to allow halter keep on wrestling throughout the playoffs while the case was pending.

Halter wrestled all the way back to the state championship match - and won. The victory was not without controversy, as fans at the Kohl Center in Madison showered the young wrestler with boos.

"I think it's childish," Hayden said moments later in a post-match interview with the Southeast Wisconsin Preps Report. "I mean, these people don't know me." 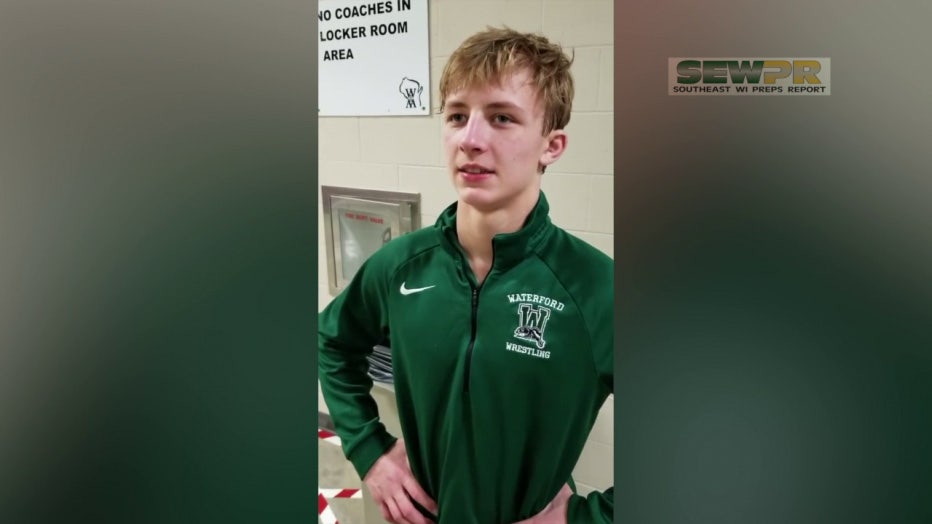 Hayden Halter, interviewed by SE WI Preps Report after winning his second state title, says "We got what we wanted."

Halter thanked his parents for keeping his dream of a second state title alive.

"They kept going and fighting for me," he said. "And we got what we wanted."

The decision was unsettling for Wisconsin high school referees.

"You should not have to worry about being second-guessed in a court of law," Labecki said.

Even more troubling for the National Association of Sports Officials.

"Because it destroys sports!" said Barry Mano, founder and President of NASO, which is based in Racine.

"Did I feel like getting in my car and going down to see Judge Piontek right downtown here in Racine? Yeah, the thought crossed my mind."

Mano says he resisted the temptation, but he supported the WIAA's decision to keep fighting the Halter lawsuit, even after the wrestling season was over.

Mano says it's not just a concern in wrestling, but in every sport at any level.

"We get most of ‘em right. It’s not a perfect world," said Alan Goldberger, a referee, attorney and author of Sports Officating - A Legal Guide.

"If the officials were to be overturned every time a mistake was documented, then there’d be nothing but lawsuits about games," Goldberger said.

Goldberger has compiled a list of decades of sports lawsuits over controversial calls. Like the New York high school wrestler in 2005 who sued after a referee ejected him for tossing his headgear in the air. A judge refused to intervene. In 2010, A West Virginia judge tossed out the suspensions of four football players for fighting, but the state supreme court overturned the decision and supported the suspensions. And in 2014, an Oklahoma high school demanded the final minute of a football game be replayed after officials mistakenly called back a game-winning touchdown. The judge declined to change the outcome, writing that it would "inevitably usher in a new era of robed referees."

"That is not the job of the United States court system," Goldberger said.

Shawn Halter says his lawsuit wasn't really about the referee or his call, but about how the WIAA applied its own rules on suspensions.

After the conference tournament in 2019, Shawn Halter tried to quickly enter his son in a junior varsity match, hoping to burn Hayden's one-match suspension.

"Basically a known loophole," he said.

It was a match in which Hayden Halter never actually intended to wrestle. After all, he had never wrestled junior varsity before.

WIAA refused to count the JV match toward the suspension based on its own interpretation of a rule that was later clarified in writing.

"If you are a varsity athlete and you get disqualified from a varsity match or contest, you should sit the next varsity contest," Labecki said.

More than two years after the controversial match, Hayden Halter's case finally went to trial in May. And last month, a different Racine County Judge -- Eugene Gasorkiewicz – ruled in favor of WIAA, which promptly stripped Halter of his 2019 State Championship.

"Yeah, but, nothing changes," said Shawn Halter. "He won the state title. You can never re-wrestle the bracket."

Goldberger says the decision has implications beyond Halter.

It does not create new law, rather he says it reaffirms more than 50 years of legal precedent that protect the role of referees as the final arbiter in sports.

You might say the WIAA flexed its muscle – and won.

Shawn Halter and his son have until early September to decide if they will appeal the ruling. Shawn Halter tells FOX6 he has not yet made a decision on that. Meanwhile, Hayden Halter is now a graduate of Waterford Union High School. His father says he is still considering where he intends to wrestle in college this fall.

Green Bay Packers quarterback Aaron Rodgers on Wednesday, July 28 – the official start to training camp – spoke for the first time since returning to the team.