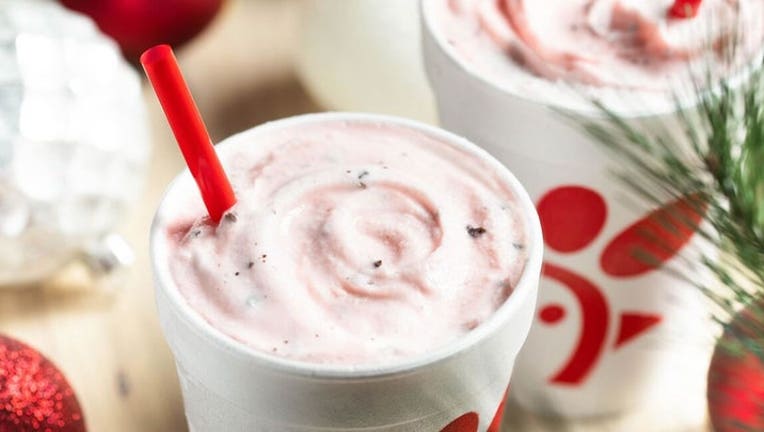 Chick-fil-A is bringing back its Peppermint Chip Milkshake for a limited time starting Nov. 1. (Chick-fil-A)

It’s almost the holiday season which means Chick-fil-A’s Peppermint Chip Milkshake will be back on the menu soon.

This week, the restaurant chain announced that fans can start ordering the seasonal favorite starting on Monday, Nov. 1. The drink will only be available for a limited time, the announcement said.

The hand-spun Peppermint Chip Milkshake is made with the chain’s "frozen dairy treat," Chick-fil-A Icedream, and chips of peppermint bark, according to the announcement.

The dessert is topped with whipped cream and a cherry when it’s ordered in-store or for pickup, Chick-fil-A said in its announcement.

Fans can order the milkshake in-store, on the Chick-fil-A app or on chick-fil-a.com. In its announcement, Chick-fil-A clarified that when delivery prices are higher than in-store orders.

Earlier this month, a lawsuit was filed against Chick-fil-A alleging that the company deceived customers by raising the prices of items ordered for delivery while promising customers low-cost delivery fees.

A person was shot in downtown Sheboygan on Friday afternoon. He later dies of his injuries at Children's Wisconsin, police said.

Halloween candy: How much is OK for kids to eat?

With Halloween just around the corner, parents across the U.S. are scrambling to buy candy to pass out to trick-or-treaters.