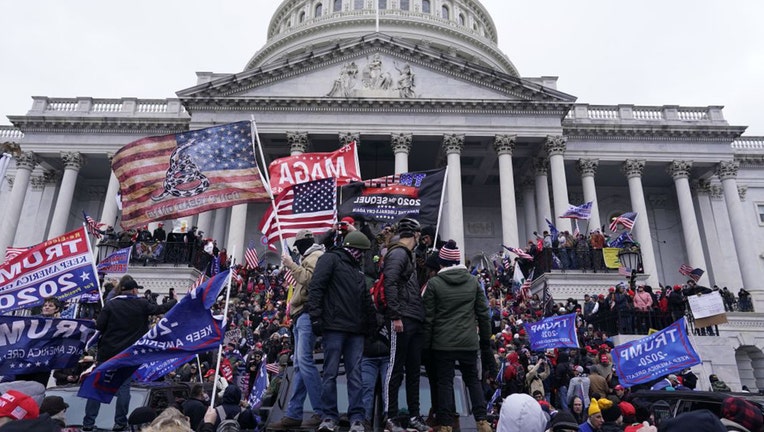 FILE - Protesters gather on the second day of pro-Trump events fueled by President Donald Trump's continued claims of election fraud in an to overturn the results before Congress finalizes them in a joint session of the 117th Congress on Wednesday, J

MADISON, Wis. - A federal judge sentenced two Wisconsin men to probation Friday for joining in the Jan. 6 insurrection at the U.S. Capitol.

The men pleaded guilty in September to a misdemeanor charge of parading, demonstrating or picketing in a Capitol building. Prosecutors argued they each should spend two weeks in jail, but their attorneys argued they deserved probation since there's no evidence they committed any acts of violence or destruction.

Both men appeared for a sentencing hearing by video in federal court in Washington, D.C. and said they were sorry.

Marofski's attorney, Jonas Bednarek, added that Marofski already has lost his job at Kwik Trip in La Crosse and the Army National Guard has started stripping him of his security clearances. Nelson's attorney, Jessica Ettinger, said Nelson, a psychiatric technician at Mendota Mental Health Institute, is embarrassed and has cut "toxic politics" out of his life.

Special counsel Michael Gableman asked in court for the arrest of the mayors of Madison and Green Bay if they do not testify in the investigation.

First lady Jill Biden and second gentleman Doug Emhoff will travel to Milwaukee and Waukesha the afternoon of Wednesday, Dec. 15.

Former FOX6 photojournalist Vanshay Murdoch filming a scene of a previous crime for our FOX affiliate in Minneapolis, caught an attempted carjacking on his GoPro. The screams from Murdoch forced the would-be jackers to flee.