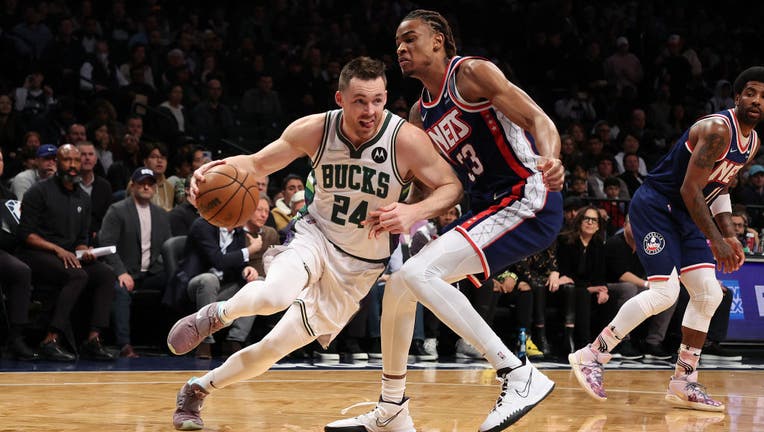 NEW YORK, NEW YORK - MARCH 31: Pat Connaughton #24 of the Milwaukee Bucks drives against Nic Claxton #33 of the Brooklyn Nets during their game at Barclays Center on March 31, 2022 in New York City. NOTE TO USER: User expressly acknowledges and agree

MILWAUKEE - Milwaukee Bucks guard Pat Connaughton has signed a multiyear contract extension after scoring a career-high 9.9 points per game this past season.

"Pat is a key contributor to our success with his energy, toughness, teamwork and 3-point shooting," general manager Jon Horst said Monday in a statement. "Pat has continued to embrace our fans and the city of Milwaukee, and we’re glad to have agreed to an extension with him."

The 29-year-old Connaughton played 26 minutes per game and made 2.2 3-pointers per game this past season to set career highs in both categories. He made 39.5% of his 3-point attempts.

Connaughton has been with the Bucks for four seasons after three with the Portland Trail Blazers. He has career averages of 5.9 points, 3.3 rebounds and 1.2 assists in 417 regular-season games.