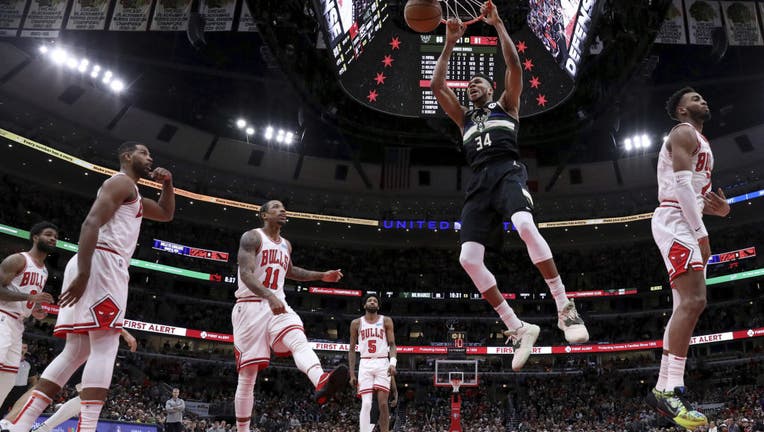 Milwaukee Bucks forward Giannis Antetokounmpo (34) dunks the ball in the second half of a game against the Chicago Bulls at the United Center in Chicago on Friday, March 4, 2022. (Chris Sweda/Chicago Tribune/Tribune News Service via Getty Images)

MILWAUKEE - The defending champion Milwaukee Bucks are downplaying their recent domination of the Chicago Bulls as they open the playoff portion of their title defense.

Milwaukee, the No. 3 seed in the Eastern Conference, has won 16 of its last 17 meetings with the sixth-seeded Bulls heading into their first-round series beginning Sunday at Fiserv Forum. The Bulls’ lone victory came in the 2020-21 regular-season finale, when the Bucks rested all their starters.

"They’re a great team," Bucks forward and two-time MVP Giannis Antetokounmpo said. "We played them and obviously in the regular season were able to win some games against them. But they’re going to come out, they’re going to play hard and going to make it as tough for us as possible."

Each of the two times they’ve met within the last month, the Bucks have beaten the Bulls by at least 21 points.

Bulls forward Tristan Thompson, who won a title and made four straight NBA Finals appearances with Cleveland from 2015-18, believes regular-season dominance in a particular series doesn’t necessarily translate to the postseason.

Chicago had the best record in the East for a substantial portion of the season but dropped 15 of its final 22 games. The Bulls have struggled without Lonzo Ball, who hasn’t played since Jan. 14 and is unavailable for the postseason due to a torn meniscus in his left knee.

The Bulls are just 2-21 against the top four seeds in each conference. The Bucks remain wary.

"Playoffs are tricky, man," Bucks forward Bobby Portis said. "You can’t disrespect anybody, disrespect your opponents just because of what happened in the past. You still have to go out and play basketball and have the proper respect for everyone who’s out there and let the dominoes fall how they fall."

Chicago’s Zach LaVine finally gets to perform on the postseason stage. Considering he is in his eighth year, it sure hasn’t been an easy path.

The Olympic gold medalist and two-time All-Star went through major rebuilding efforts in Minnesota and Chicago, never winning more than 31 games in his first seven seasons. He’s on his sixth coach, with Billy Donovan finishing his second year in Chicago.

"I think Zach has always prioritized winning, has always wanted to win," Donovan said. "It’s always been important to him. So for me personally, I’m happy for him because you see the work he puts in."

LaVine has averaged 24.4 points despite dealing with nagging soreness in his left knee the past few months.

The Bucks have lost Game 1 in five of the six playoff series they’ve played over the last two seasons. The exception was a first-round sweep of the Miami Heat in the opening round last year.

Milwaukee rallied from 2-0 deficits to win the Eastern Conference semifinals over Brooklyn and the NBA Finals over Phoenix.

Chicago's DeMar DeRozan ranked fourth in the NBA with 7.8 free-throw attempts per game, and the Bulls will need the All-Star forward to get to the line often in this series.

His free throw totals against the Bucks have fluctuated wildly.

In the first meeting between these teams, DeRozan went 17 of 18 from the line and had the most free throws made and attempted of any Bucks opponent all season. He went a combined 13 of 13 from the line in the other three Bucks-Bulls games. He didn't attempt a single free throw in a 126-98 loss at Milwaukee on March 22.

"He's incredibly good at getting to the free throw line," Bucks coach Mike Budenholzer said. "I think we've spent probably more time and effort throughout the season and continue this week to try and just understand all the details, all the small things that it takes to defend him without fouling, the mental discipline, the mental toughness."

Bucks guard Grayson Allen figures to get a hostile reception from the crowd when the Bucks visit Chicago.

In the first meeting between these teams this season, Allen committed a flagrant foul on Alex Caruso that caused the Bulls guard to break his right wrist. Allen was ejected and received a one-game suspension. Caruso missed nearly two months.

The Bulls will be short-handed on the bench at least for the first game, after assistant coaches Chris Fleming and Damian Cotter tested positive for COVID-19.

Donovan said the two were experiencing mild symptoms. He wasn’t sure how long they would be out.