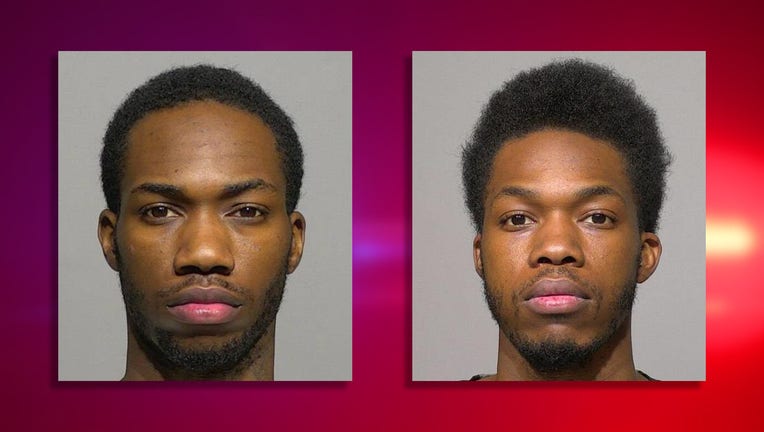 MILWAUKEE - Two Milwaukee brothers have been charged with first-degree reckless homicide in connection to a March 20 shooting.

Prosecutors say Richard and Raekwon Dangerfield fired shots from a car on the city's north side -- striking and killing a man in another vehicle.

Police were called to the area of 76th and Bobolink just before 6 p.m. At the scene, police found a sedan in the middle of the intersection, the driver's door apparently struck by gunfire. The victim was found slumped over in the driver's seat with a wound near his eye.

Lifesaving measures were attempted but were ultimately unsuccessful. An autopsy confirmed the victim died of a gunshot wound to the head.

Upon investigation, detectives determined the victim was unintentionally struck. The gunfire resulted from an argument involving two other cars. Ten total spent casings were recovered in the area, consistent with two different shooters.

Surveillance footage from a nearby business showed a confrontation between the occupants of two vehicles, a Saturn and a Chrysler. Puffs of dust or smoke, consistent with apparent bullet impact between the vehicles, were seen as one of the vehicles turned. The video also showed the victim's car approach and then collide with the median.

Shortly after the shooting, police were called to a car crash near 76th and Sheridan. One of the cars involved was determined to be the Saturn seen on surveillance.

At the home, the complaint states, authorities recovered two handguns consistent with having fired the casings found at the scene.

In a statement to police, Richard said that Raekwon began shooting at the Chrysler seen on surveillance before beginning to shoot, too -- using a gun taken from the driver. The group in the Saturn had allegedly "encountered" the Chrysler at several locations that day. Raekwon told police he saw two people in the Chrysler were armed and that one of them opened their door, showing a gun, before he began to shoot.

Both defendants face the same homicide charge. Richard Dangerfield faces an additional charge of possession of a firearm by an adjudicated delinquent. Court documents state Richard was convicted of second-degree sexual assault as a minor more than 10 years ago.

A preliminary hearing for both defendants was scheduled for March 27.

Jacob Blake Jr. was shot by Kenosha Officer Rusten Sheskey in August while Blake was about to get into an SUV during a domestic dispute. Blake's federal complaint against Sheskey, the only defendant, is seeking unspecified damages.