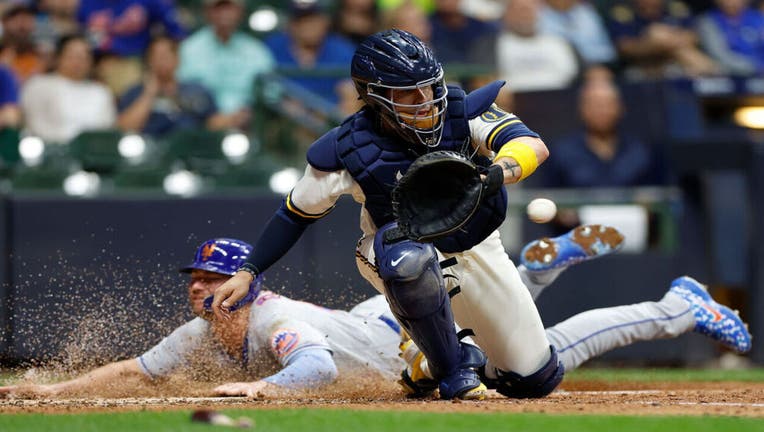 MILWAUKEE, WISCONSIN - SEPTEMBER 19: Tyler Naquin #25 of the New York Mets scores ahead of the trow to Victor Caratini #7 of the Milwaukee Brewers in the eighth inning at American Family Field on September 19, 2022 in Milwaukee, Wisconsin. (Photo by

MILWAUKEE - Max Scherzer was pulled from his 200th win with a perfect game intact, and the New York Mets clinched their first playoff berth in six years by beating the Milwaukee Brewers 7-2 on Monday night.

Reinstated from the injured list before the game, Scherzer (10-4) struck out nine in six innings. The 38-year-old ace threw only 68 pitches, but that was as far as the NL East leaders let him go in his first start in 16 days.

Pete Alonso hit a three-run homer off reigning NL Cy Young Award winner Corbin Burnes (10-8), and the Mets won their fifth straight to wrap up at least one of the three National League wild cards. They lead the NL East by one game over defending World Series champion, Atlanta, which beat Washington 5-2 at home.

It is the 10th postseason appearance in the franchise's 61-season history, and first since the Mets lost to San Francisco in the 2016 NL wild-card game.

Scherzer was activated Monday after recovering from left oblique irritation. Mets manager Buck Showalter said before the game "we’re not going to go too deep with Max physically" in his first big league start since Sept. 3.

Andrew McCutchen hit a 104 mph line drive to right field off Scherzer in the second, but it was caught by a sliding Tyler Naquin to end the inning.

Scherzer sprinted to the mound before the bottom of each inning. He often had the ball in hand before any of his teammates, aside from catcher Tomás Nido or a warmup catcher, emerged from the dugout.

A smiling Scherzer received a hearty round of high-fives from teammates when he returned to the dugout after the sixth, indicating he was done for the night.

Scherzer exited his previous start with fatigue on his left side and went on the IL with oblique irritation. He also went on the injured list with a left oblique strain in May and was activated July 5.

The loss dropped Milwaukee 8½ games behind first-place St. Louis in the NL Central and 2½ games back of Philadelphia for the third NL wild card. The Cardinals and Phillies were idle. The Brewers had won two of three games against the Yankees in Milwaukee over the weekend.

With one out in the fourth, Burnes gave up consecutive singles before Alonso hit a 1-2 changeup 437 feet for his 36th home run to stake New York to a 3-0 lead.

New York extended its lead to 5-0 in the sixth inning after back-to-back triples by Brandon Nimmo and Francisco Lindor, and an RBI double by Daniel Vogelbach.

The previous Mets players to hit consecutive triples were Jose Reyes and Jason Bay in April 2010.

Rowdy Tellez hit a two-run homer off Megill in the seventh, his 32nd.