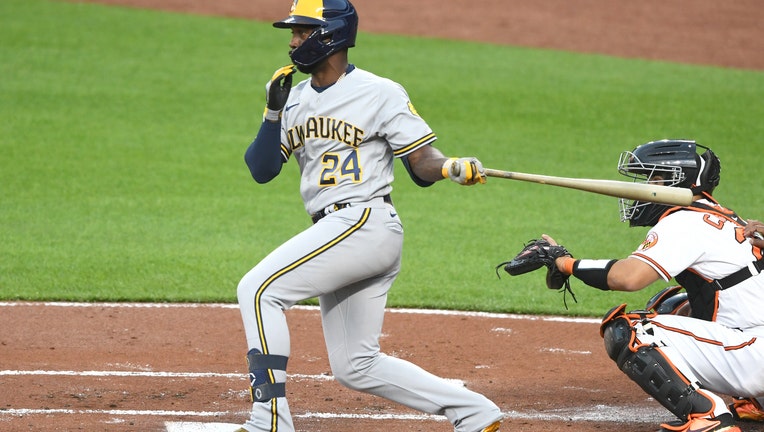 BALTIMORE, MARYLAND - APRIL 12: Andrew McCutchen #24 of the Milwaukee Brewers doubles in two runs in the first inning during a baseball game against the Baltimore Orioles at the Orioles Park at Camden Yards on April 12, 2022 in Baltimore, Maryland. (

BALTIMORE - Andrew McCutchen hit a tiebreaking single in the seventh inning, Devin Williams pitched out of his own jam in the eighth, and the Milwaukee Brewers held on for a 5-4 victory over the Baltimore Orioles on Tuesday night.

After being shut out in two of their first four games, the Brewers improved at the plate. Williams nearly gave the game away by allowing a single and two walks to load the bases with nobody out in the eighth.

The right-hander recovered, however, striking out Chris Owings, Jorge Mateo and pinch-hitter Ryan McKenna to end the inning and keep Milwaukee ahead by a run.

Then closer Josh Hader had his own problems in the ninth, allowing a leadoff double by Mullins before eventually retiring Ramón Urías on a flyball with two on and two out for his second save.

McCutchen had three RBIs, and Willy Adames scored three runs for the Brewers.

Félix Bautista (0-1) allowed a one-out double by Adames in the seventh. Cionel Pérez retired Christian Yelich on a grounder before McCutchen's sharp single put Milwaukee ahead.

Eric Lauer allowed the second-inning grand slam by Mullins, but he retired eight of his last nine batters after that. He yielded three earned runs and three hits in 4 1/3 innings.

Spenser Watkins allowed four runs in three innings for Baltimore. Only one of those runs was earned, but that didn't absolve him of responsibility for the others.

In the first, Watkins had Adames caught trying to steal second before the pitch, but his throw was a bit behind Owings, the shortstop, and Owings got an error for dropping it.

McCutchen's double made it 2-0.

After Mullins' grand slam, the Brewers quickly tied the game. Watkins made a poor throw to first after fielding a grounder by Rowdy Tellez. That should have been the third out, but instead Adames hustled all the way home from second on the error by the pitcher.

A wild pitch sent Tellez to second, and he scored on Hunter Renfroe's double to tie it at 4.

NYPD has named Frank R. James as a person of interest in a shooting on a Brooklyn subway train Tuesday morning. He has an address in Wisconsin.

A safety project to install bullet-resistant glass at all of Milwaukee's police district stations got a huge boost on Tuesday, April 12.