Videos captured the moment when a breaching whale landed on the bow of a small boat off of Plymouth, Massachusetts, on July 24, 2022. No injuries were reported and the boat wasn't seriously damaged. Credit: Ted Gardziel via Viralhog and Leo Enggasser/Amazing Animals+/TMX

A breaching whale crashed into a fishing boat in Massachusetts on Sunday in shocking footage posted to social media.

Video shows a boat anchored off of White Horse Beach in Plymouth, MA when a large whale breaches the water and crashes onto the boat's bow.

Passengers all appeared to be at the stern of the boat, and there were no reported injuries from the incident.

Fish are seen flying out of the water moments before a breaching whale landed on a fishing boat off of Plymouth, Massachusetts, on July 24, 2022. (Credit: TED GARDZIEL VIA VIRALHOG)

"The whales are sending a clear message," the original post of the video read. 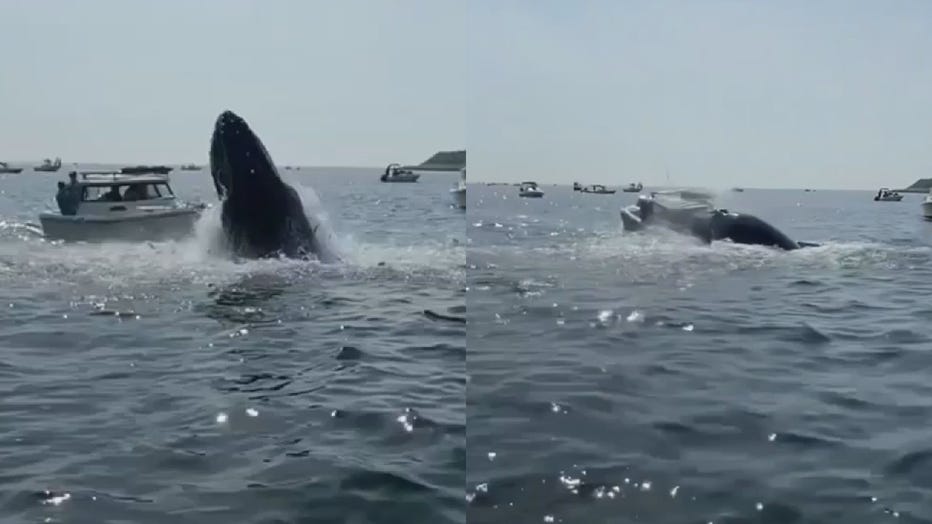 The whale is pictured in screengrabs from a video recorded on July 24, 2022, which captured the animal landing on the bow of a small boat off the coast of Plymouth, Massachusetts. (Credit: LEO ENGGASSER / AMAZING ANIMALS+ / TMX)

Instances of whales jumping onto ships are rare but not unheard of. Researchers say most instances occur with juvenile whales.