BOSTON - A powerful nor'easter brought blizzard conditions to a large swath of the Northeast Saturday, canceling thousands of flights and leaving over 100,000 without power as temperatures were set to plunge in the storm's wake.

The snow began late Friday night as the storm rapidly intensified off the mid-Atlantic coast, reaching official "bomb cyclone" status by undergoing a central pressure drop of 35 millibars in 24 hours.

Widespread snow totals of 12-24 inches were observed along the New Jersey shores, across Long Island and into Rhode Island, Connecticut, Rhode Island, and eastern Massachusetts.

On New York's Long Island, Islip had the highest snow report at 24.7 inches as of 7:30 p.m. Eastern Time. The 23.2 inches that fell after midnight makes Saturday their second-snowiest calendar day in their history, and overall it's the fourth-highest two-day total on record.

Bridgewater, Massachusetts, also checked in with two feet of snow. 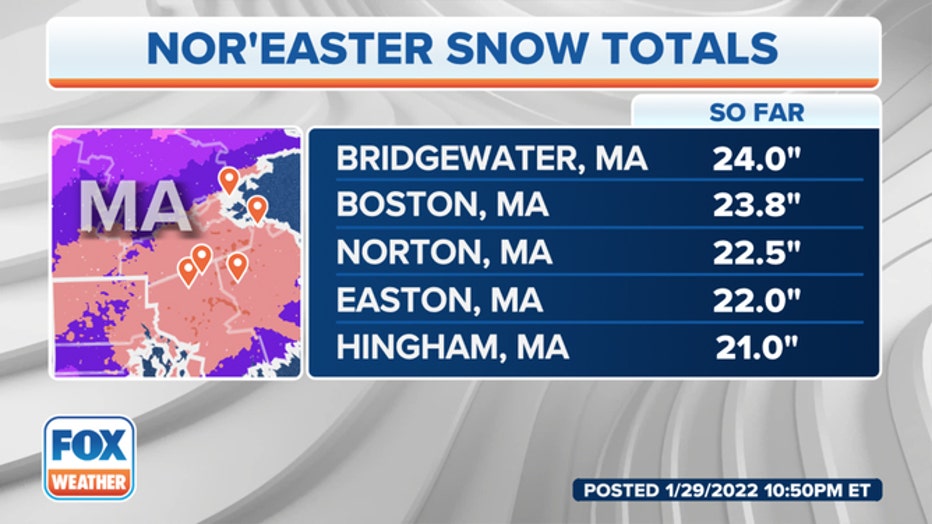 Some of the top snow totals from the Blizzard of 2022. (FOX Weather)

For Boston, it was the city's first blizzard warning in four years and the first snow emergency of the year. Logan Airport reported a storm total of 23.8 inches as of Saturday evening. The NWS said because 23.6 inches fell during a 24-hour period, the day tied a 2008 record for the snowiest day in the city's history.

The New York City area had about 8-12 inches of snow while about 5-9 inches fell in the Philadelphia area. But light snow spread south into North Carolina and even into Georgia.

RELATED: Snow Totals: How much snow fell in Pennsylvania, New Jersey, and Delaware?

In addition to the snow, blistering wind speeds raked the coastlines with a gust of 87 mph registered in Wellfleet, Massachusetts on Cape Cod, 83 mph in Nantucket and 78 mph in Provincetown.

More than 135,000 people were without power in Massachusetts during the storm's peak, including much of Nantucket. 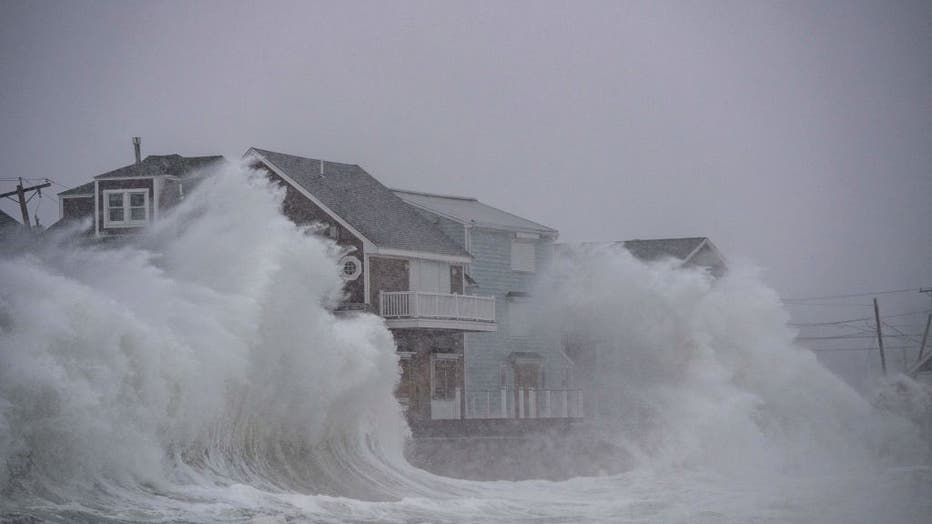 Waves crash over oceanfront homes during a noreaster in Scituate, Massachusetts on January 29, 2022. (Photo by Joseph Prezioso/AFP via Getty Images)

City officials warned that power could be out for as many as two days due to continued challenging weather conditions. They had opened a warming shelter at Nantucket High School as temperatures were set to drop into the teens.

Coastal flooding was another issue in Nantucket, with storm surge flooding the downtown areas along Easy Street, according to Nantucket police.

And stormy waves crashed into windows at the Pilgrim Sands Hotel in Plymouth, Massachusetts, during high tide.

Air travel essentially ground to a halt in the northeast with over 3,600 flights canceled Saturday, including Newark, New York's JFK and LaGuardia, and Boston's Logan airport.

Another 1,000 flights were already canceled for Sunday.

Officials also shut down all bridges in the state to traffic.

Drier but colder weather in the storm's wake

Residents buried under the snow will get a dry day with some sunshine Sunday to begin clean-up efforts, but icy cold conditions will continue as arctic air settles along the Eastern Seaboard.

Lows are expected to drop into the single digits around Boston on Saturday and Sunday nights, with highs Sunday in the 20s.

But cold air will slide south into Florida with hard freeze warnings in effect for much of the state Sunday morning. 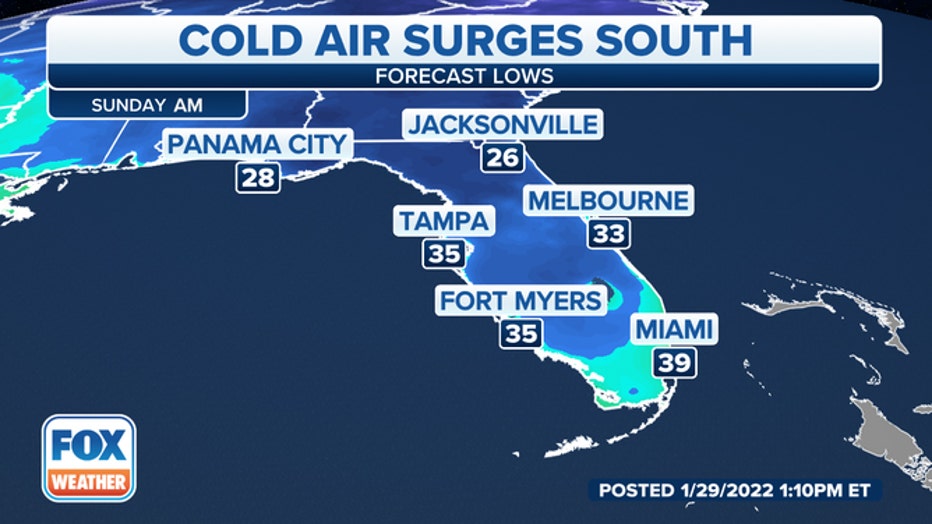 Lows in Jacksonville will drop into the mid 20s with a low of 31 predicted in Orlando, and Miami may drop below 40 degrees for the first time in 11 years.

Warmer air returns to the east for the middle of the week, with highs in the northeast reaching the mid-40s by Thursday.