Biden’s orders on Tuesday will bring the number of executive actions on immigration during his first two weeks in office to nine. The moves aim to reverse many of former President Donald Trump's policies to deter immigration, both legal and illegal, though details remained scarce.

Recently-confirmed Homeland Security Secretary Alejandro Mayorkas will lead a task force on family separation, focused largely on reuniting parents and children who remain apart. It is unclear how many, but about 5,500 children have been identified in court documents as having been separated during Trump's presidency, including about 600 whose parents have yet to be found by a court-appointed committee.

"The task force will report regularly to the President and recommend steps to prevent such tragedies from occurring again," the Biden administration said in a statement.

The review of border security includes a policy to make asylum-seekers wait in Mexican border cities for hearings in U.S. immigration court. It is a step toward fulfilling a campaign pledge to end the Remain in Mexico policy, known officially as Migrant Protection Protocols, which enrolled nearly 70,000 asylum-seekers since it began in January 2019.

The White House said it aims to "create a humane asylum system" by rescinding or reconsidering Trump policies that caused "chaos, cruelty and confusion."

"Those policies have undermined the safety of our communities, penalized asylum seekers fleeing violence, and destabilized security across the Western hemisphere," the White House said in a statement. 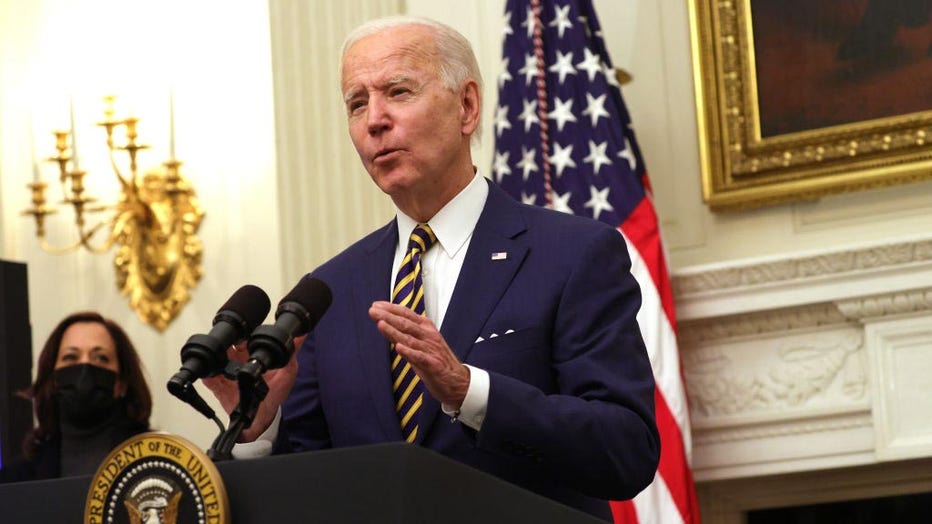 President Joe Biden speaks as Vice President Kamala Harris looks on during an event on economic crisis in the State Dining Room of the White House Jan. 22, 2021 in Washington, D.C. (Photo by Alex Wong/Getty Images)

Officials said the administration will seek to address the underlying causes of migration by confronting the "instability, violence, and economic insecurity" that currently drives individuals from their homes. The administration said it will work with foreign governments and organizations to provide protection and opportunities to asylum seekers closer to home.

The White House warned that it will take time, which may cause grumbling among some pro-immigration advocates.

"The situation at the border will not transform overnight, due in large part to the damage done over the last four years," the statement reads. "But the President is committed to an approach that keeps our country safe, strong, and prosperous and that also aligns with our values."

Roberta Jacobson, a top Biden aide on border issues, asked Spanish-language media on Friday to discourage audiences from coming to the U.S. border. "It is not the moment," she said in Spanish, adding that the journey was "very dangerous, and we are in the middle of creating a new system."

The White House will also do a "top-to-bottom review of recent regulations, policies, and guidance that have set up barriers to our legal immigration system." It will include a review of Trump's "public charge rule," which makes it more difficult for people to obtain green cards if they use government benefits, such as housing subsidies.

The moves demonstrate that, just as Trump remade immigration policies from the White House, Biden can undo them with the stroke of a pen — some more easily than others.

On his first day in office, Biden halted work on the border wall with Mexico while the administration studies whether it can re-divert money that has been assigned to the project. He lifted a travel ban on several predominantly Muslim countries and reversed plans to exclude people in the country illegally from the 2020 census.

He also ordered efforts to preserve the Deferred Action for Childhood Arrivals program, known as DACA, which has shielded hundreds of thousands of people who came to the U.S. as children from deportation.

More lasting changes must pass Congress, a job that Trump and his other predecessors Barack Obama and George W. Bush failed to achieve. Also on his first day in office, Biden proposed legislation to give legal status and a path to citizenship to everyone in the country who doesn't have it — an estimated 11 million people.

Biden promised far-reaching changes on immigration during his campaign, but it was unclear how quickly he would tackle the lightning-rod issue. His first-day actions delighted and surprised many pro-immigration advocates who are now being asked for patience.

Last month, a 100-day deportation moratorium went into effect but a federal judge barred the U.S. government from enforcing it. U.S. District Judge Drew Tipton issued a temporary restraining order sought by Texas, which sued Jan. 22 against a Department of Homeland Security memo that instructed immigration agencies to pause most deportations.

Tipton said the Biden administration had failed "to provide any concrete, reasonable justification for a 100-day pause on deportations." Biden had promised to issue the moratorium during his campaign, and the order was an early blow to the administration.

The order represents a victory for Texas’ Republican leaders, who often sued to stop programs enacted by the Obama administration. It also showed that just as Democratic-led states and immigration groups fought Trump over immigration in court, often successfully, so too will Republicans with Biden in office.