WASHINGTON - President Joe Biden's visited a dilapidated bridge connecting Ohio and Kentucky to talk up the virtues of bipartisanship with Senate Republican leader Mitch McConnell on Wednesday while at the same time blasting House Republicans for an "embarrassing" scene of disarray that has kept the chamber from organizing itself.

The Democratic president's trip to the Brent Spence Bridge, which is getting a federal facelift, comes as Washington is gripped by drama over the GOP's inability to unify behind a candidate for House speaker. Biden, as he left the White House, said the chaos was "not a good look" for the country. The election of a speaker is required before House members can be sworn in for the new congressional session.

"That’s not my problem," Biden said of the speaker vote. "I just think it’s really embarrassing it’s taking so long." He added that "the rest of the world is looking" at the turmoil on the House floor while his focus is on "getting things done." 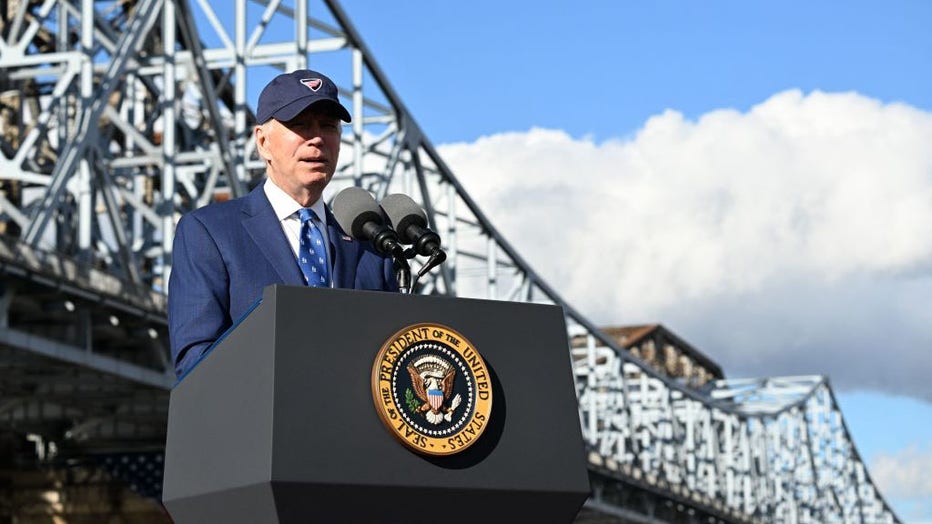 President Joe Biden speaks about the bipartisan infrastructure law in front of the Brent Spence Bridge in Covington, Kentucky, on Jan. 4, 2023. (Photo by JIM WATSON/AFP via Getty Images)

Even before the drama over the vote for speaker, Biden’s chances of securing additional massive, transformational legislation had all but evaporated in a divided Washington, where Republicans have taken a slim majority in the House after the midterm elections. The focus is set to turn to GOP investigations of the Biden administration and battles over essentials like funding the government and meeting federal debt obligations.

That has the White House and top Cabinet officials hoping to direct the country's focus to Biden’s achievements during his first two years in office and demonstrating how the new laws directly affect Americans.

Biden's appearance with McConnell was meant to mark a renewed push by his administration to highlight the 2021 bipartisan infrastructure law and to appeal to newly empowered Republicans to find additional areas of cooperation in the new Congress.

"We all know these are really partisan times. But I always feel that no matter who gets elected, once it’s all over, we ought to look for things that we can agree on and try to do those, even while we have big differences on other things," McConnell said in brief remarks before Biden took the stage, calling the bridge an example of bipartisanship that the "country needs to see."

Democrats' stronger-than-expected showing in the midterms allowed their party to retain control of the Senate even as the House fell to Republicans.

On Tuesday, Rep. Kevin McCarthy of California, the ostensible GOP pick for speaker, failed to win the required majority on three ballots — the first time in a century that a speaker hasn’t been selected on the first ballot. Members-elect returned to the chamber on Wednesday for additional balloting.

The infrastructure law provided $1 trillion that Biden's administration is doling out for roads and bridges, broadband networks and water projects across America. The money will be critical not just for the communities getting the help but to the Democratic president’s political theory that voters are hungry for bipartisanship that delivers tangible results.

President Joe Biden spoke on Jan. 14 about his infrastructure plan's $27 billion program to repair and upgrade roughly 15,000 bridges across the U.S.

The perennially congested bridge spanning the Ohio River has frustrated motorists for decades. The infrastructure law will offer more than $1.63 billion in federal grants to Ohio and Kentucky to build a companion bridge that will help unclog traffic on the Brent Spence.

"It’s a giant bridge, man," Biden said this week when asked about his planned trip to the bridge. "It’s a lot of money. It’s important."

Other top administration officials are holding similar events Wednesday and Thursday at other major bridges in the U.S. Vice President Kamala Harris is stopping by the collection of bridges crossing the Calumet River in Chicago; Transportation Secretary Pete Buttigieg was appearing at the Gold Star Memorial Bridge in New London, Connecticut; and White House infrastructure coordinator Mitch Landrieu was to be at the Golden Gate Bridge in San Francisco on Thursday with former House Speaker Nancy Pelosi.

All the bridges will get new funding under the infrastructure law, which is one of Biden’s marquee bipartisan accomplishments.

Landrieu told reporters on Air Force One that Biden's appearance with McConnell was "really important to demonstrate that these two people who have been friends for a long time and who don’t always see eye to eye have put their country first."

The Brent Spence, which carries Interstates 71 and 75 between Cincinnati and northern Kentucky, was declared functionally obsolete by the Federal Highway Administration in the 1990s. It has become an outsized symbol of the nation's crumbling infrastructure, with successive presidents from both parties singling out the aging span as they stumped for better roads and bridges. 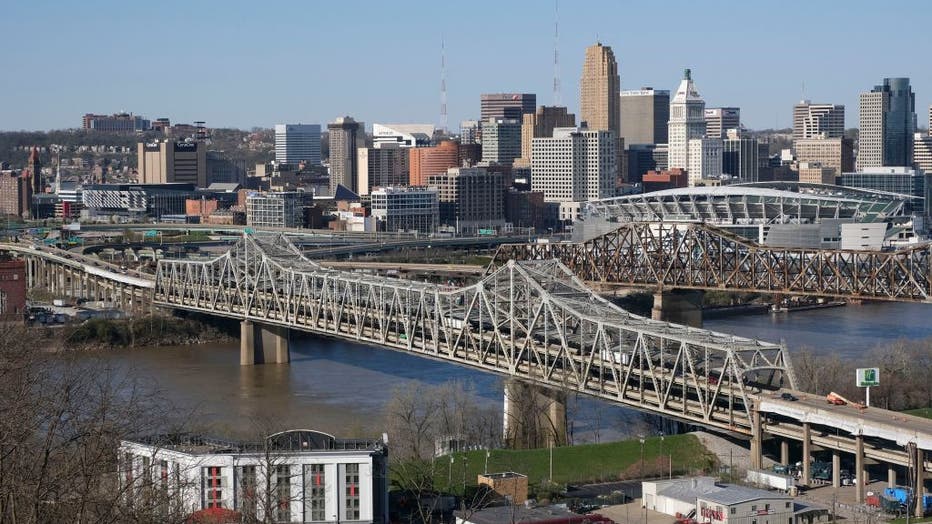 FILE - The Brent Spence Bridge spans the Ohio River on the Ohio-Kentucky border in Cincinnati, Ohio on April 2, 2021. (Photo by JEFF DEAN/AFP via Getty Images)

In 2011, President Barack Obama name-checked McConnell and House Speaker John Boehner, who represented the Cincinnati suburbs, as he stood near the Brent Spence and pushed the two Republican leaders to support a jobs package that would fix similarly ailing bridges. Six years later, President Donald Trump told a local Fox station that "I’ve already heard about the bridge. I love the area."

"We’re going to get it fixed," Trump said about the Brent Spence, which he called "dangerous."

As for Biden, he said during a 2021 CNN town hall in Cincinnati that his administration would "fix that damn bridge of yours." The span was designed for 80,000 vehicles a day but was easily doubling that on its narrow lanes.

On Wednesday, Biden can begin to make good on that promise.

The president was accompanied at Brent Spence by McConnell, Sen. Sherrod Brown, D-Ohio, former Sen. Rob Portman, R-Ohio, Kentucky Gov. Andy Beshear, a Democrat, and Ohio Gov. Mike DeWine, a Republican. Officials hope much of the work on the new project will be completed by 2029.

The White House also invited Republican Sens. Rand Paul of Kentucky and newly sworn in J.D. Vance of Ohio, according to a White House official, but neither planned to appear with Biden in northern Kentucky.

McConnell, who was already home in Kentucky, did not fly with Biden on Air Force One but greeted him on the tarmac at Cincinnati Northern Kentucky International Airport. He joined the president in his limousine for the drive to the bridge.

McConnell was one of 19 Senate Republicans to support the infrastructure law and has said repairing the Brent Spence has long been a priority.

"This is a bridge that has been a major national issue for 25 years, my top transportation project for decades. And it’s going to be fully funded by the infrastructure bill, which I supported," McConnell told reporters on Capitol Hill on Tuesday. "It's important for me to be there."