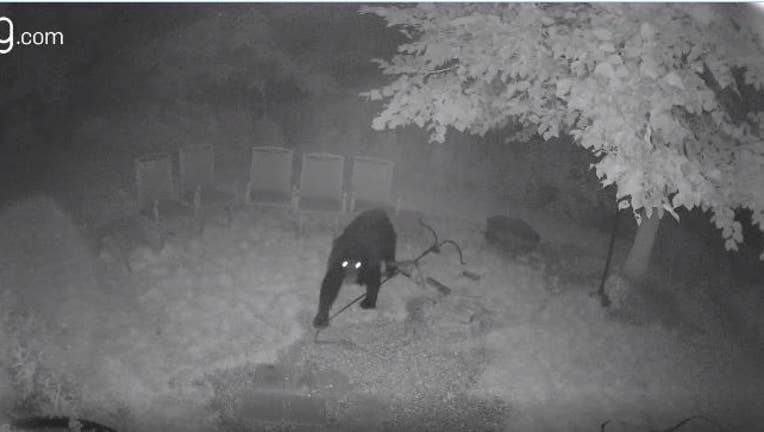 A bear caught on a Ring camera knocking over a bird feeder at a home in Madison, Wis. Learn how to safeguard against unwanted bear encounters this summer./ Photo Credit: Tammi Sonnen

MADISON, Wis. - It seems like Dane County really knows where the wild things are after several bear sightings have been caught on camera. The Wisconsin Department of Natural Resources (DNR) wants to remind Wisconsinites what precautions to take when spotting a bear.

A news release from the DNR says if a bear is near your home or cabin:

Black bears are the most common bear in Wisconsin and are primarily found in the northern half of the state. However, the population has been slowly creeping down the state over the past decade. While sightings are typically rare, sightings are higher during the summer due to the bear mating season and when 18-months-old are pushed out by their mothers and are on their own for the first time.

In addition to bear sightings, here are some ways to avoiding attracting bears altogether:

Once a bear finds food, it will most likely come back for more. Bears will periodically check sites where food was once available so they might return a couple of times before they cross that spot off their list of "where to get free food."

More information about black bear behavior and avoiding unwanted encounters can be found in the DNR’s "Living with Bears in Wisconsin" brochure.

Big Boy comes back to Wisconsin

It's been decades since Big Boy was in Wisconsin -- but it's back!