More than 12 hours after polls closed on Election Day, the hope that Democrats held to flip the Senate as well as retain majority control of the House faded away as Republicans held on to key Senate seats.

Even if Trump were to ultimately lose the 2020 election, the narrow margins of the race raised the prospect that a Biden presidency would have difficulty enacting progressive priorities or quickly move past the divisive politics of the Trump era.

While Democrats picked up must-win Senate seats in Colorado and Arizona, they suffered a setback in Alabama, and Republicans held their own in one race after another — in South Carolina, Iowa, Texas, Kansas and Montana, dramatically limiting the places where Democrats hoped to make inroads. 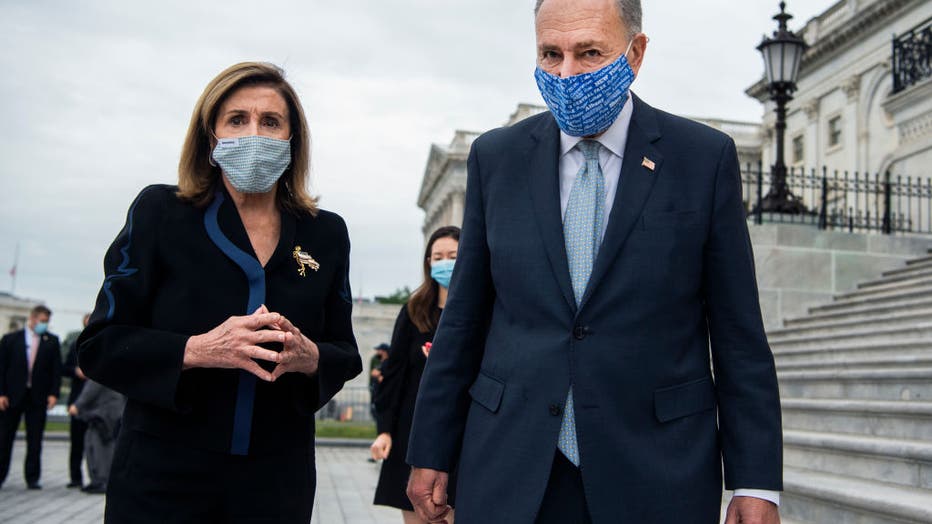 FILE - Senate Minority Leader Charles Schumer, D-N.Y., and Speaker of the House Nancy Pelosi, D-Calif., are seen on the East Front of the Capitol after a memorial service for the late Supreme Court Justice Ruth Bader Ginsburg on Sept. 25, 2020.

“You wasted a lot of money,” said incumbent South Carolina Sen. Lindsey Graham after defeating Jamie Harrison, despite the Democrat’s stunning $100 million haul for his upstart campaign. “This is the worst return on investment in the history of American politics.”

RELATED: Biden, Trump locked in tight race in key states with no winner yet announced

Democrats tried to win over voters promising to protect access to health care and provide a plan to reserve the COVID crisis. Republicans promoted their alliance with Trump, and their success in confirming conservative judicial nominees, including three to the Supreme Court.

The political landscape is quickly changing from six years ago, when most of the senators last faced voters. It’s a reminder of how sharply the political climate has shifted in the Trump era. Or not.

Democratic Sen. Gary Peters of Michigan will keep his Senate seat after a razor thin race against his opponent Republican John James.

More than 5.4 million ballots had been counted as Wednesday evening, with about 2% of the expected vote outstanding. It was too early to call the race, whose outcome will help shape which party controls the Senate. Democrat Joe Biden defeated President Donald Trump in Michigan.

The final balance of power breakdown awaited the outcomes of races in Alaska and North Carolina.

Former astronaut and Democrat Mark Kelly defeated incumbent Republican Sen. Martha McSally, flipping a critical Senate seat. An October poll from Marist College had Kelly ahead with 52% of likely voters and McSally with 46% of likely voters.

Kelly was pitched by Democrats as a centrist in one of the country’s most expensive campaigns. He will finish late Sen. John McCain’s term, which ends in 2022. McSally was appointed to the seat by Gov. Doug Ducey after she was defeated by Kyrsten Sinema in the 2018 election for the seat that was vacated by Jeff Flake.

Republican Sen. Tom Cotton of Arkansas easily won reelection, and many political experts said his race has allowed him to lay the groundwork for a potential 2024 White House bid.The 43-year-old Cotton defeated Libertarian nominee Ricky Dale Harrington, a former prison chaplain who had never run for office. The only Democrat who was running against Cotton dropped out hours after the filing deadline last year.

The Peach State was in a unique position this political cycle with both a regularly scheduled Senate race and a special election.

It’s a toss-up between incumbent Republican Sen. David Perdue and his Democratic challenger Jon Ossoff. A FOX News tally shows the incumbent holds 50.21% of the total votes with Ossoff holding 47.48% of the total vote. So far, 97% of votes have been reported.

FOX News is reporting Georgia's special election will head into a runoff between Incumbent Republican Kelly Loeffler and Democrat Raphael Warnock after neither received more than 50% of the vote.

RELATED: Perdue vs Ossoff: Battle for Georgia US Senate seat

Iowa incumbent Republican Sen. Joni Ernst defeated Democrat challenger Theresa Greenfield in one of the most contested races of the 2020 campaign.Ernst won more than 786,000 votes, or 51.5%, with 93% of the results in. Greenfield received more than 693,000 votes.The race between Ernst and Greenfield, a real estate developer, was tight throughout with the Republican senator pulling ahead in the week leading up to the election, FOX News reported.A recent poll from Emerson College had Ernst with 46% of likely voters and Greenfield with 45%. A New York Times/Siena College poll had 45% of likely voters supporting Ernst and 44% of them supporting Greenfield.

Incumbent Republican Sen. Susan Collins may avoid a runoff with Independents Lisa Savage and Max Linn after Democrat Sarah Gideon conceded Wednesday.The outcome, announced on Wednesday, a day after voting ended, gave the 67-year-old incumbent a fifth term in office and dealt another blow to Democrats' hopes for taking control of the GOP-led U.S. Senate.

Fundraising efforts also reflected the competitiveness of the race. According to the Associated Press, Bullock raised $28 million in the third quarter, the most for any Montana statewide candidate in a single three-month period. Daines raised $11.5 million in the same timeframe.

Cunningham did well in fundraising, bringing in $28 million in the third quarter, more than any other North Carolina politician, according to his campaign. The Associated Press reported that Tillis raised $6.6 million in the same time period.

Incumbent Republican Sen. Lindsey Graham fended off a challenge by Democrat Jaime Harrison, retaining his seat in a narrow race, according to a race projection by FOX News.

Graham, 65, will enter his fourth term after first being elected to the U.S. Senate in 2002. He currently serves as the chairman of the Senate Judiciary Committee.

Graham also surpassed a record. The Associated Press reported in October that Graham raised $28 million in the third quarter, more than any other Republican Senate candidate. But he admitted to FOX News last month that he was being “killed financially” compared to Harrison’s campaign portfolio.

While Republicans are almost certain to keep their control over the Senate, Democrats were projected to maintain a hold on the House.

Democrats currently have 204 seats in the House, while the GOP has 190 seats. Political insiders believe the Democrats will most likely expand their control, according to FOX News.

Here are some races to keep tabs on as more districts report results:

It was a rematch between Incumbent Democrat TJ Cox and Republican David Valadao. A FOX News tally showed Valdado with 51.38% of the votes and Cox with 48.62% with 42.36% of votes reported. Cox beat out Valadao in 2018.

GOP candidate Marjorie Taylor Greene, who has publicly supported the QAnon conspiracy theory, won in the solidly Republican district with 75% of the total vote, according to FOX 5 Atlanta.

Her Democratic challenger, Kevin Van Ausdal, dropped out of the race, citing personal reasons. Greene will be replacing Republican Tom Graves, who resigned on Oct. 4.

There was no Republican on the district’s ballot, which includes part of the Bronx and lower Westchester County. During the campaign, Bowman spoke about growing up Black in public housing, being beaten by police officers at age 11, becoming a teacher and then a principal deeply involved in education reform.

Incumbent Democrat Max Rose is behind Republican Nicole Malliotakis by a small margin with Rose holding 42% of the vote and Mallliotakis with 58%, and 95% of precincts have reported so far.

The race was a rematch, as Torres Small formerly ran against Herrell, defeating her by an extremely narrow margin of less than 4,000 votes.The district traditionally leans Republican, and Trump won the district by 10 points in 2016 over Hillary Clinton.

Republican Madison Cawthorn was called as the winner of the U.S. House seat in western North Carolina Tuesday that was vacated by White House Chief of Staff Mark Meadows.

Cawthorn, 25, becomes the youngest member elected to Congress since the late 1700s.

The candidate -- who first catapulted to GOP stardom after speaking at the Republican National Convention in August, getting up from his wheelchair at one point on stage -- defeated incumbent U.S. Rep. Moe Davis, D-N.C., to capture the 11th Congressional District seat, according to the Associated Press.

Peterson had withstood a Republican wave before, but political insiders believed this was going to be his toughest fight yet given that his district was turning deep red — and they were right.

Peterson, the chairman of the House Agriculture Committee, was seeking his 16th term.

Bice, 46, earned a reputation as a political moderate in her two terms in the Senate, writing a series of bills to help overhaul the state’s antiquated alcohol laws and inviting a Hindu leader to deliver a prayer after the Legislature faced criticism for its lack of religious diversity.