LOS ANGELES - After 2020’s record-breaking hurricane season in the Atlantic Ocean, it would be nice to catch a weather break in 2021 — but hurricane activity is showing no signs of slowing down.

On Friday, NOAA’s Climate Prediction Center announced it would use 1991-2020 as the new 30-year period of record, which updated the average number of storms for the Atlantic hurricane season, increasing it to 14 named storms and seven hurricanes.

The previous Atlantic storm averages — based on the period from 1981 to 2010 — were 12 named storms, six hurricanes and three major hurricanes.

According to NOAA, this update process occurs once every decade. 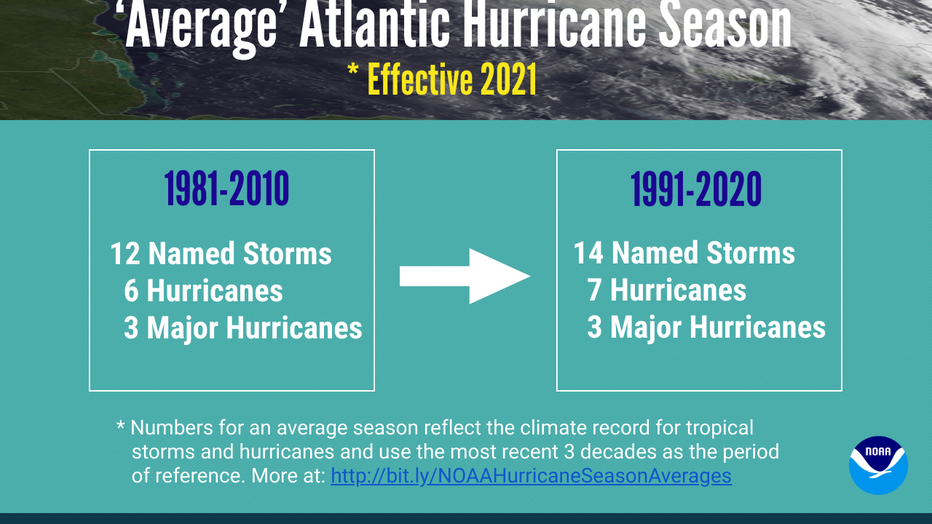 "This update allows our meteorologists to make forecasts for the hurricane season with the most relevant climate statistics taken into consideration," said Michael Farrar, director of NOAA’s National Centers for Environmental Prediction. "Our work illustrates the value of NOAA’s investments in next-generation technologies to capture the data that underpins our outlooks and other forecast products. These products are essential to providing the public and local emergency managers with advance information to prepare for storms, and achieving NOAA’s mission of protecting life and property."

In a discussion led by Phil Klotzbach, a meteorologist at Colorado State University specializing in Atlantic basin seasonal hurricane forecasts, researchers examined the factors which will likely determine this year’s Atlantic basin hurricane activity and cited the likely absence of El Niño as a primary factor.

5 of the worst hurricanes to hit the US

When combining the worst of the worst, there are a handful of storms that changed the history of the country.

The team is predicting 17 named storms during the Atlantic hurricane season. Of those, researchers expect eight to become hurricanes and four to reach major hurricane strength with sustained winds of 111 miles per hour or greater.

This forecast is above the new 30-year average of 14 named storms and seven hurricanes and lines up with what Klotzbach and his team predicted to FOX Television Stations in December.

"Early indications are that 2021 could potentially be another active season," Klotzbach told FOX TV Stations late last year. "Right now, we have about a 50% chance of having an above-normal hurricane season."

"With every hurricane season, you just need to be prepared, because you never know if a storm is going to strike. It just takes that one landfalling hurricane near you to make it an active season," Klotzbach said.

The United States saw a record number of hurricanes in the Atlantic, including unprecedented back-to-back Category 4 hurricanes in Central America in November.

There were 12 storms that made landfall in the continental United States, according to the World Meteorological Organization.

"This is the most storms on record, surpassing the 28 from 2005, and the second-highest number of hurricanes on record," the WMO wrote in a press release in December.

Researchers at the University of Bristol analyzed future projections of hurricane rainfall in the Caribbean and found that climate change could result in extreme hurricane events being as high as five times more likely.