A Milwaukee vigil mourned the eight lives lost, six of them women of Asian descent, during a string of shootings in Atlanta-area massage parlors on Tuesday.

MILWAUKEE - In sadness and in grief for the Georgia community, separated only by the miles between cities, the Asian American Pacific Islander Coalition of Wisconsin (AAPI) gathered outside Milwaukee City Hall on Thursday, March 18.

The vigil mourned the eight lives lost -- six of them women of Asian decent -- during a string of shootings in Atlanta-area massage parlors on Tuesday.

"There are no excuses for the violence he committed," said Tammie Xiong, Hmong American Women's Association executive director. "As a Hmong woman, I deeply felt the agonizing pain of what it means to not feel safe in my own body."

"We stand with you, we are praying with you, we know you are hurting. The NAACP is here with you to support you," said Braverman.

"We're all connected and we are committed to stopping this violence, to stopping racism," said State Rep. Francesca Hong (D-Madison).

"I am committed to the work of partnering with all of you standing here today," Sheriff Lucas said.

"That was hatred in action, and we have to be committed not only to calling it out but addressing it at its root cause," said Moore. "The greatest way to overcome that is with love and with accountability." 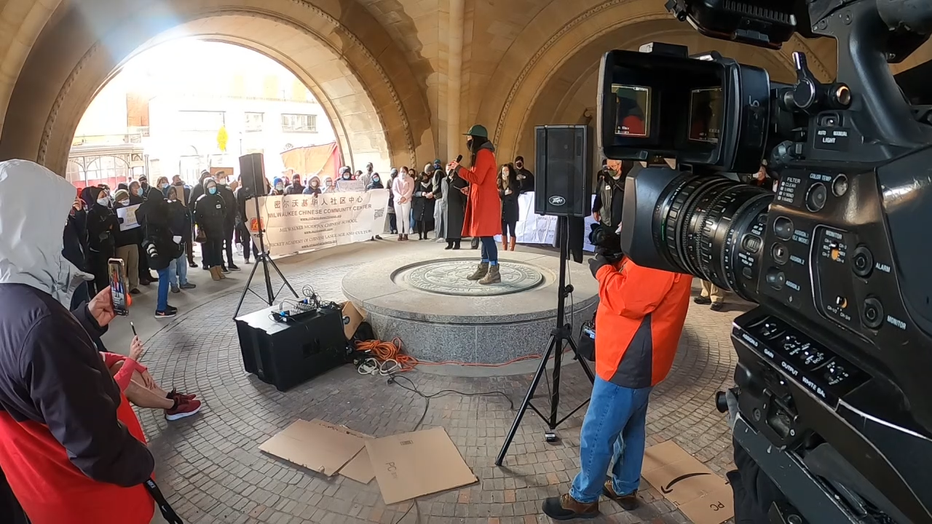 Groups organize at Milwaukee City Hall, holding a vigil and condemning violence, after a string of Atlanta-area spa shootings.

The AAPI is reporting more than 3,800 hate-fueled incidents nationwide against the Asian-American/Pacific Islander community since the start of the COVID-19 pandemic.

"The fear is there's a disproportionate number of people not reporting and not coming forward," Pardeep Kaleka, AAPI co-chair, said.

In addition to mourning the lives lost this week, Kaleka said the coalition is there to serve as a voice and wants others to know that the community is behind them.

"For communities to be courageous and come forward and report so we can allocate resources to communities that need it and make sure those communities feel heard and safe," said Kaleka.

Statement from Milwaukee County Board of Supervisors

"The tragedy that happened in Georgia on Tuesday night is only the most recent incident in a disturbing surge of violence and hate directed towards the Asian American Pacific Islander (AAPI) community over the past year.

"The Milwaukee County Board of Supervisors stands strongly with the AAPI community and denounces all acts of violence and discrimination committed against people based on race or ethnicity.

"In order to achieve our vision of becoming the healthiest county in Wisconsin by achieving racial equity, we must call out all acts of hate whenever they occur."

A West Allis woman has been charged with two counts of attempted first-degree intentional homicide after a shooting in Cudahy on March 13.