FOX6 Political Reporter Jason Calvi takes a look at Wisconsin's presidential election results and the impact the narrow race has had on both campaigns.

MADISON, Wis. - Democratic Presidential Nominee Joe Biden has been projected to win Wisconsin's 10 electoral votes in the 2020 presidential election, according to the Associated Press.

Even before the race in Wisconsin was called for Biden, President Donald Trump's campaign said they would immediately request a recount in the state. The Trump campaign brought up what it calls "reports of irregularities in several Wisconsin counties."

At 2 a.m. on Wednesday, Nov. 4, President Trump said he was winning in Wisconsin. At the time, he was.

Milwaukee finished the count around 3 a.m. Those ballots were key to Joe Biden winning the state. 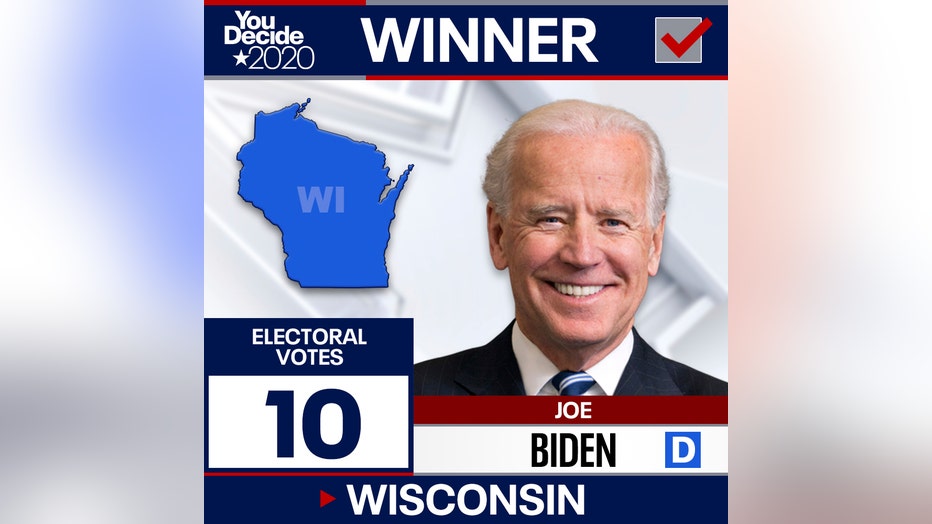 The Trump campaign brings up "reports of irregularities."

"Despite ridiculous public polling used as a voter suppression tactic, Wisconsin has been a razor thin race as we always knew that it would be. There have been reports of irregularities in several Wisconsin counties which raise serious doubts about the validity of the results. The President is well within the threshold to request a recount and we will immediately do so," said Bill Stepien, the Trump 2020 campaign manager.

"I’m happy to talk about the facts of how elections work; and elections are such a deliberate, meticulous process where each of our local election officials in our local communities are conducting this process in a public setting. Every piece of data is publicly available. And so there’s no opportunity to add additional votes to the tally because you have to make sure that everybody’s registered to vote, that they have a lawful absentee request on file, or that they signed the poll book where they showed their photo ID. There is no opportunity to count a ballot that did not go through that incredibly meticulous process to make sure it was issued correctly, to make sure that it’s counted correctly. And then again, it also has to go through those three steps of canvas: at the municipal, the county and the state level before we have certified results."

What kind of irregulatories are claimed? The Trump campaign didn't list examples.

Some Trump supporters also questioned the sudden Biden lead in Wisconsin, after trailing President Trump in the Election Day returns.

Wolfe, however, said everything was done in public. In fact, our FOX6 crews watched the ballot counting in Kenosha and Milwaukee.

"But there are no dark corners or locked doors in elections. Anybody was free to watch those processes as they unfolded yesterday, they could watch those ballots being tallied," she said.

Republicans knew they needed to run the score up very high earlier on election night. Polls suggested that most Biden supporters planned to vote absentee. Additionally, Milwaukee is a Democratic stronghold that Hillary Clinton won 76% of in 2016. Combining those points with the fact absentee ballots take longer to process and count -- a process that can't start in Wisconsin until Election Day, you can see why it was possible for Joe Biden to make a sudden sprint into winning this state race.

While the Trump campaign said it would request a recount immediately, they cannot do so right now.

First, within a week after the election, each county's board of canvassers “shall open and publically examine the returns.”

When the last county finishes its work and sends results to the Wisconsin Elections Commission by a November 17 deadline, it opens up a three day window for the losing campaign, if they are within a point of the winner, to request a recount. Outside of that margin, there is no recourse to a recount.

It's also possible the Trump campaign could decide to skip the recount and save the millions of dollars it would cost them.

Even if President Trump's campaign requests a recount later this month, the 20,000 vote differential is a "high hurdle," according to Former Gov. Scott Walker, who chimed in on Wednesday. The last two Wisconsin recounts netted a vote change of a couple hundred votes.

Scattered protests, no wide unrest, in US on election night

The outcome of the hard-fought contest for the presidency remained undecided Wednesday, stirring worries that prolonged uncertainty could yet spark conflict.

President Donald Trump and Joe Biden are locked in a tight race in Wisconsin.