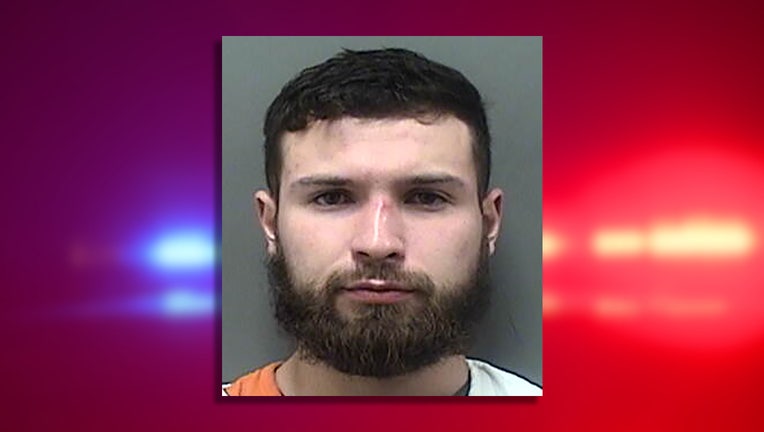 RACINE, Wis. - Brian Bublitz Jr., 24, of Racine has been charged with multiple counts, accused of firing shots at a city park on Nov. 25.

According to a criminal complaint, Racine police were called to Colonial Park around 10:30 p.m. on Tuesday, Nov. 24 for a report of shots fired. Dispatch advised that multiple callers heard approximately 20 shots fired. Upon arrival, officers did not locate any suspects.

Later, around 1:30 a.m. on Wednesday, Nov. 25, dispatch advised of another round of shots fired -- this time, approximately seven.

When officers responded the second time, they spotted a small black pickup truck leaving the park and stopped the driver near Owen Street and High Street.

The driver -- since identified as Bublitz -- and one other person were in the vehicle. Both were ordered out of the vehicle.

A police officer smelled the odor of marijuana coming from the vehicle, the complaint states, and found a handgun magazine in plain view and a semi-automatic handgun in the center console. According to the complaint, neither Bublitz nor the passenger had a permit. Another magazine was found behind the driver's seat, and officers located two smoking pipes and a grinder with marijuana residue elsewhere in the vehicle.

Bublitz told police that he recently purchased the gun and had fired two rounds at Colonial Park. He said he was shooting at trees and that the passenger did not shoot the gun at all.

The complaint states that Bublitz told police it was not the first time he has shot his gun at the park. Officers at the park located 21 spent shell casings and one live round in the parking area.

Police reported that Colonial Park is in a residential area and that citizens walk the trails in its woods, which is surrounded by homes. Police stated in the complaint that the rounds could have "easily" struck a person or residence nearby.

A preliminary hearing in the case has been scheduled for Dec. 2.

'It's not fair:' Accused killer freed after witness misses trial

According to a criminal complaint, Kimble's mother witnessed the shooting. Although the district attorney's office has not said yet if that is the witness they are looking for.