Heavy rain lashed down on the Caribbean island of St Kitts and Nevis on Friday, Saturday 16, as tropical storm Fiona reached the Leeward Islands. (Credit @sn3akdin0saur via Storyful)

A Hurricane Warning has been issued for Puerto Rico as Tropical Storm Fiona creeps through the northeastern Caribbean and islands feel the effects from the cyclone.

Over 80,000 customers were without power in Puerto Rico on Saturday as Fiona's outer bands reached the U.S. territory.

The storm's maximum sustained winds are around 60 mph and the National Hurricane Center warns strengthening is likely as the center approaches the coasts of Puerto Rico and the Dominican Republic on Sunday.

Some residents are not taking the storm for granted and used the hours before Fiona's arrival to stock up on gasoline and other supplies.

The tropical storm turned deadly Friday evening after a man was swept away by floodwaters on the French Caribbean island of Guadeloupe after heavy rainfall.

Fiona's wind and rain impacts are expected to spread through Puerto Rico and the Dominican Republic on Sunday.

Where is Tropical Storm Fiona?

Tropical Storm Fiona is centered less than 200 miles southeast of Puerto Rico and is producing a large area of showers and thunderstorms on the eastern side of its center of circulation.

A tropical storm is a tropical cyclone that has maximum sustained winds between 39 and 73 mph. Once a tropical storm forms, the National Hurricane Center gives it a name off one of six rotating lists.

WHAT'S THE DIFFERENCE? TROPICAL DEPRESSION VS. TROPICAL STORM VS. HURRICANE 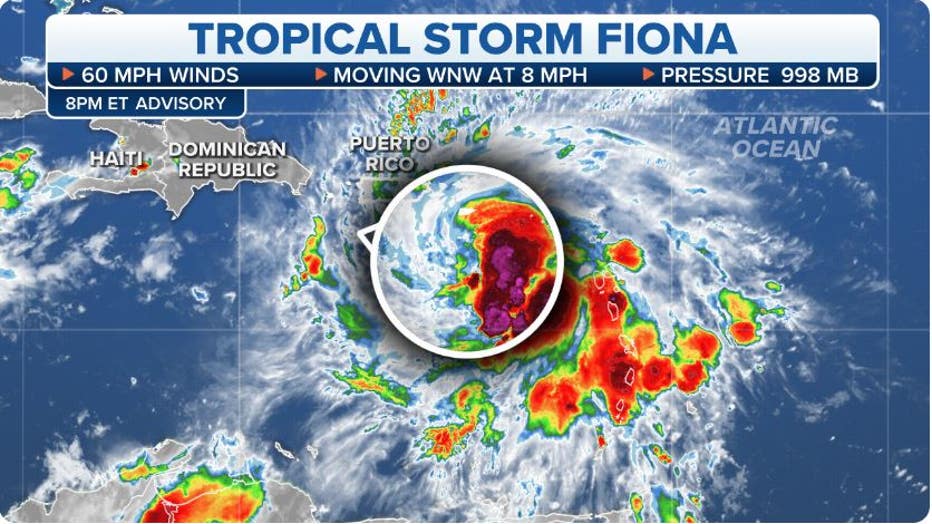 Tropical Storm Watches and Warnings have been issued for several island nations in the northeastern Caribbean.

A Tropical Storm Warning means sustained winds of 39 mph or higher are expected within the next 36 hours. The National Hurricane Center warns tropical-storm-force winds will begin in the northeastern Caribbean islands on Friday afternoon, then spread westward to the U.S. Virgin Islands on Saturday and across Puerto Rico late Saturday and Saturday night.

A Tropical Storm Watch means sustained winds of 39 mph or higher are possible within the next 48 hours. The National Hurricane Center warns tropical-storm-force winds are possible in the watch areas of Dominica on Friday evening and the British Virgin Islands on Saturday. 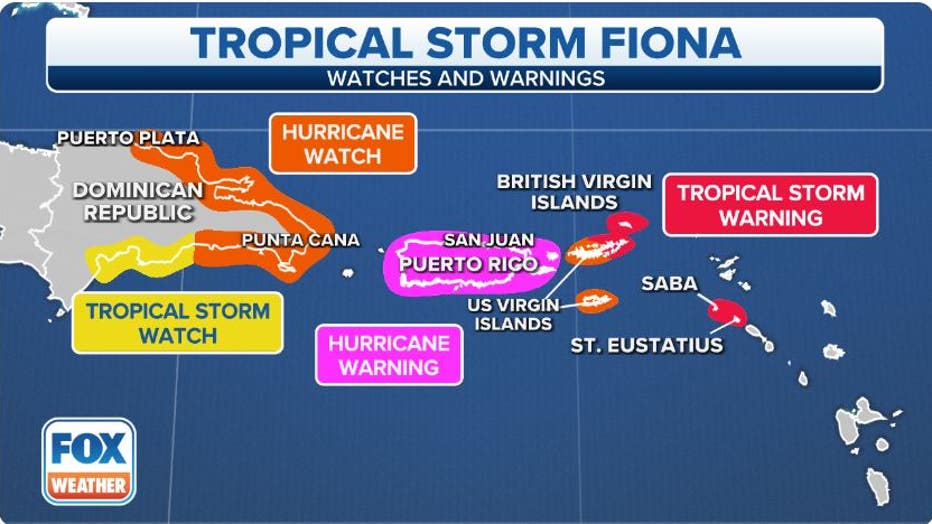 A Hurricane Watch is in effect in Puerto Rico, including Vieques and Culebra, ahead of the arrival of gusty winds and heavy rain associated with Tropical Storm Fiona.

Tropical Storm Watches and Warnings have been issued for several island nations in the northeastern Caribbean.

Islands under a Tropical Storm Warning include Puerto Rico, the U.S. Virgin Islands and eastern parts of the Dominican Republic.

Timelapse satellite imagery captured flashes of lightning within Tropical Storm Fiona as it moved westwards over the Caribbean Sea on Friday, September 16. (Credit: CIRA via Storyful)

What is the forecast for Tropical Storm Fiona?

Tropical Storm Fiona is expected to generally move westward through early Sunday before turning toward the west-northwest and northwest later Sunday and Sunday night.

According to the FOX Forecast Center, Fiona will move across the northeastern Caribbean and track near or just south of the British and U.S. Virgin Islands and Puerto Rico from Saturday into Sunday. From there, Tropical Storm Fiona will approach the southern coast of the Dominican Republic on Sunday night and early Monday. 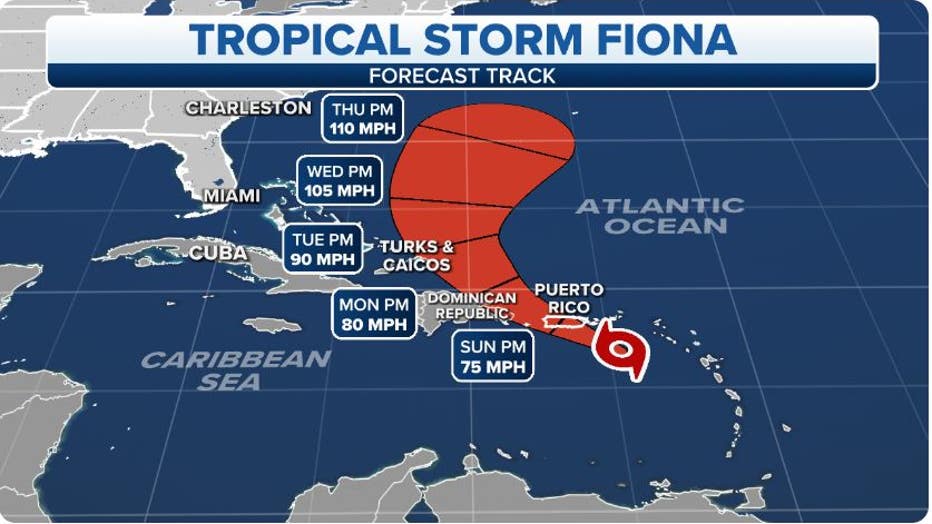 Gradual strengthening is expected over the next few days, and Fiona could be near hurricane strength (74-plus mph) as it approaches the southern coast of the Dominican Republic Sunday night and early Monday.

Tropical Storm Fiona is then likely to strengthen further after moving across the Dominican Republic early next week, and it could become a hurricane by the middle of next week over the southwestern Atlantic near the Bahamas.

What are the impacts of Tropical Storm Fiona?

Fiona's wind and rain are likely to reach the Dominican Republic on Sunday and the Turks and Caicos by Monday night or Tuesday.

Flood Watches have been issued for Puerto Rico and the U.S. Virgin Islands from Friday evening through Monday afternoon.

Tropical Storm Fiona is expected to dump 3 to 6 inches of rain across the northeastern Caribbean islands and the British and U.S. Virgin Islands.

Puerto Rico is likely to receive 4 to 8 inches of rain, with isolated amounts of up to 12 inches possible across eastern and southern Puerto Rico.

In the eastern Dominican Republic, between 6 and 10 inches of rain is forecast, with isolated maximum totals as high as 16 inches in the higher terrain.

The Turks and Caicos are forecast to pick up 4 to 8 inches of rain early next week. 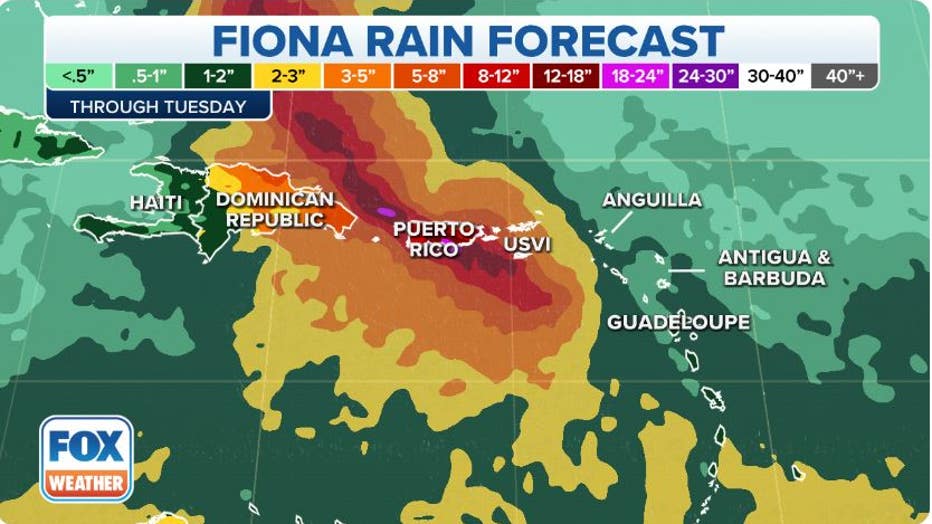 The FOX Forecast Center noted that recent rainfall has saturated the soils in Puerto Rico, so the heavy rain from Fiona could lead to flooding in urban areas and small streams, as well as trigger mudslides in the archipelago's mountainous terrain.

Other island nations from the northeastern Caribbean through the Turks and Caicos will also have a threat of flash and urban flooding, along with the potential for mudslides in areas of higher terrain. The highest risk of mudslides is in southern and eastern Puerto Rico and the eastern Dominican Republic.

It remains uncertain exactly where Tropical Storm Fiona will track after passing the Dominican Republic. The FOX Forecast Center says the chances of any U.S. impacts are currently low, though they cannot be ruled out entirely. However, any threat to Florida or the U.S. East Coast would be at least a week away.

A dip in the jet stream is forecast to move over Florida and the Bahamas early next week, which should provide an opening for Fiona to turn northward.

If Fiona tracks south of Puerto Rico and avoids the mountains of the Dominican Republic, it is more likely to remain a stronger storm and make this northward turn, which would increase the odds of Fiona moving out into the open waters of the Atlantic and staying away from the U.S.

However, if Fiona tracks closer to those islands and is weakened after interacting with the mountains of Puerto Rico and the Dominican Republic, the tropical storm will have a better chance of staying west and moving closer to Florida or the U.S. East Coast.

"When storms pass over those mountainous islands, the results are unpredictable, which makes it impossible to know what state Fiona will be in if it takes that track," FOX Weather Hurricane Specialist Bryan Norcross said.

The various possibilities of Fiona's track overlaid on the five-day forecast cone of uncertainty are shown on the map below, and you can see there's quite a spread among the computer forecast models.

WHAT IS THE CONE OF UNCERTAINTY IN HURRICANE FORECASTS? 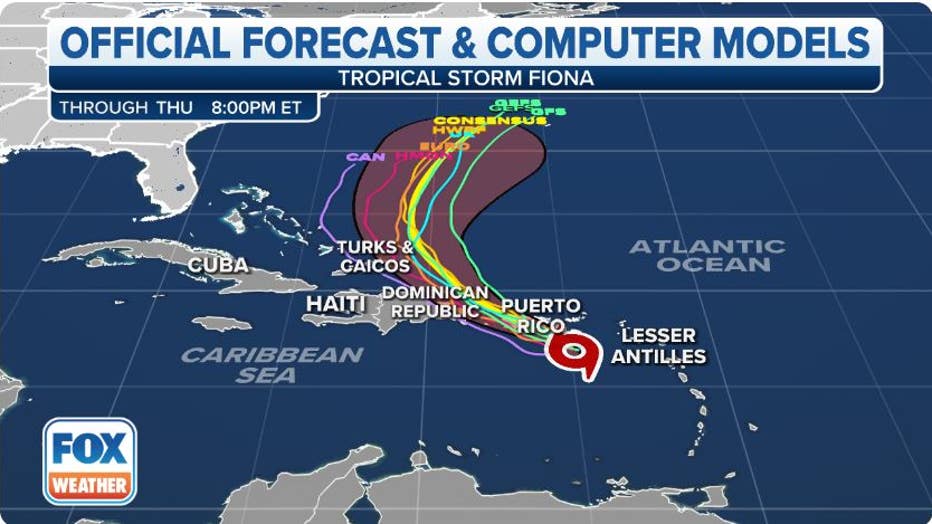 "When and if the storm reaches the Atlantic, and if it still has a circulation, the computer forecast models indicate a weather pattern conducive for redevelopment over the Atlantic waters," Norcross said. "So everybody in the Bahamas and on the U.S. East Coast, including in Florida, should stay informed."

Be sure to check back with FOX Weather for updates over the next several days as the details become clearer.

Two other areas to watch in Atlantic

In the western Atlantic Ocean, a low-pressure system centered a few hundred miles west-northwest of Bermuda is producing disorganized showers and thunderstorms.

This system is expected to move east to east-southeastward at 10 to 15 mph, and development into a tropical depression or tropical storm is not expected due to strong upper-level winds.

In the central Atlantic Ocean, the northern end of a tropical disturbance is producing disorganized showers and thunderstorms.

According to the FOX Forecast Center, some slow development of this disturbance is possible early next week as it moves northwestward to northward over the central subtropical Atlantic.

The National Hurricane Center currently gives the tropical disturbance a low chance of development in the next five days. 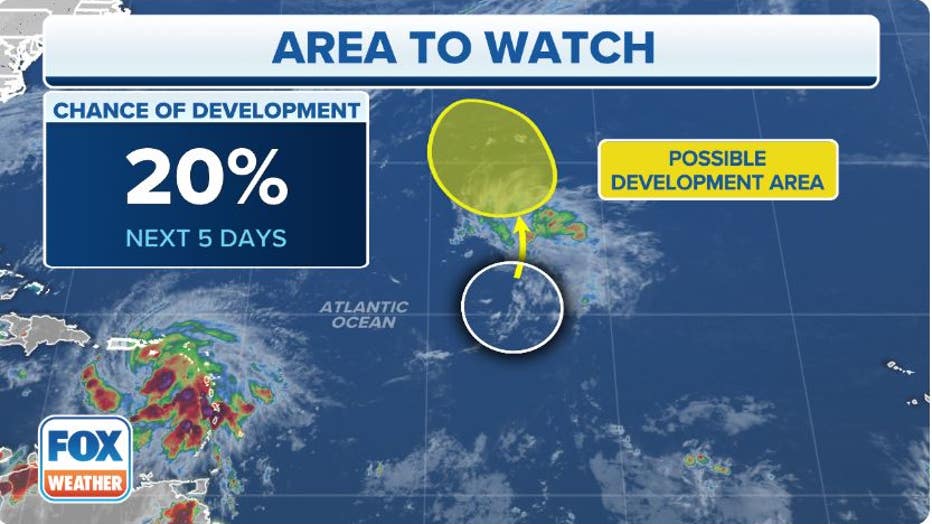 2022 Atlantic hurricane season off to a slow start

Early to mid-September is the time of the season when sea-surface temperatures are the warmest, upper-level winds relax and drier air is typically not widespread.

Unlike recent active years, dry air has been more dominant than usual across the eastern parts of the Atlantic Basin, which has stunted the organization and development of tropical cyclones.

August ended without seeing a single tropical cyclone in the Atlantic Basin for only the second time in the satellite era.

HURRICANE SEASON 2022: AUGUST FINISHES WITHOUT ANY NAMED STORMS FOR FIRST TIME IN DECADES 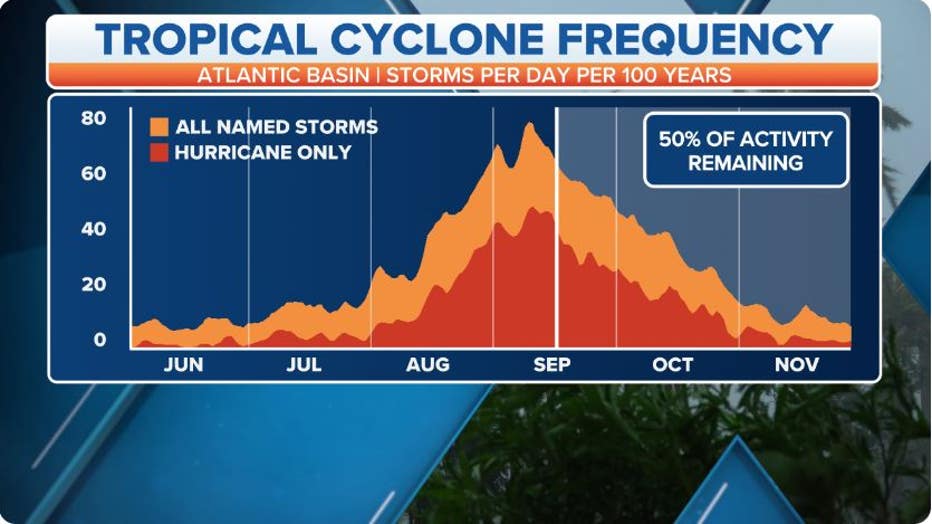 Read more of this story from FOX Weather.