MILWAUKEE (WITI) -- It’s been cold this winter, no really it has. Ok, so I don’t exactly need to twist your arm to convince you of that. Unless you’re a snowbird reading this from Florida, Arizona, or anywhere south of the Mason-Dixon Line then you already know this very well.

Our cold winter which includes a 2 to 1 ratio of cold vs. warm days since Dec. 1st (35 days colder than normal, 17 days warmer than normal) has iced over southeast Wisconsin. It has also iced over much of the Great Lakes. The picture below shows where the ice sits as of Tuesday. As of January 21st, Lake Michigan is about 32% covered. 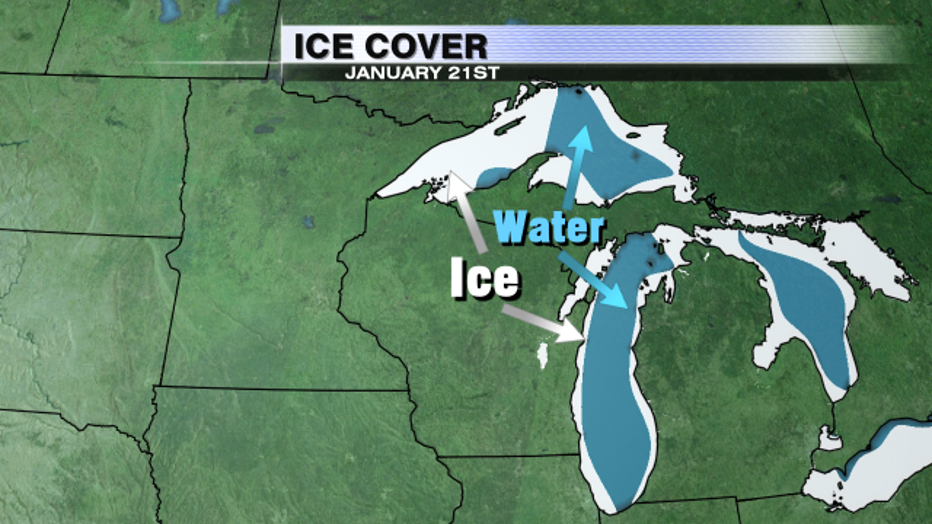 Ice coverage on the western Great Lakes as of Jan 21st.

Lake Superior which often faces the brunt of a cold, Canadian, northwest wind freezes to +90% about once every 20 years despite being the largest and deepest lake. In fact a few years ago I popped that question to folks at the National Weather Service in Marquette Michigan. The ensuing debate was a bit unexpected before settling on the 1 in 20 occurrence. Then again, that’s the” geeky numbers stuff” us meteorologists tend to nitpick on.

A frozen Great Lake doesn’t sound like a pleasant thing, especially for any business needing to load or unload cargo to or from a ship. But it can help the economy in other ways.

This winter, the Port of Milwaukee will have 3 ships anchored until spring. Workers were only expecting one but their workload just tripled as the ships remain iced in port. That’s extra $$$ in the pockets of workers, vendors, and repair facilities performing needed maintenance

The ice can also play an important role in the health of the lakes. All winter long cold, dry air flows over the lakes collecting moisture. By comparison, very little is returned in the form of snow or rain. The lake levels drop. But as ice continues to cover more and more of a lake's open water the theft of moisture by the air is cut off.

And when the moisture stops leaving the lake through evaporation, you can close the book on any chance of lake effect snow until the following winter.

In addition, larger than normal ice coverage in winter can also lead to cooler waters in spring. This in turn lowers the amount of water evaporating, even after the ice is gone.

Lake Michigan reached its all time lowest level on record last January falling 29 inches below its long term average. Thankfully a wet 2013 helped the lake recover a bit. The forecast for the next week includes this Arctic air sticking around meaning more ice will be claiming territory (while the open waters give up moisture to the dry air above).

While the chance of Lake Michigan freezing over from shore to shore is minimal the chance for Lake Superior is looking better. If the biggest brother of the Great Lakes family does ice up, it could mean even easier access for bitter cold air to reach us.

In a normal scenario cold air flowing over Superior on its way to northern Wisconsin is warmed as it collects heat from the water. But if the lake is covered in ice, winds blowing over the lake won’t see a temperature rise before arriving on our doorstep. And our prospects for an early break from this harsh winter vanish into the icy air.