Impact of ice on Lake Michigan

Impact of ice on Lake Michigan

MILWAUKEE (WITI) -- The National Weather Service said as of Tuesday, March 4th, 91 percent of the Great Lakes are now covered in ice. A UW-Milwaukee expert says that's the second-highest amount of ice cover since the 1970s.

"I think it's the first time we've had that much ice cover historically.  It's a record. To freeze Lake Michigan over totally is difficult because it's breezy. The wind pushes that ice, and it will break it up a little bit," UW-Milwaukee School of Freshwater Sciences Associate Dean & Professor Val Klump said.

Photos show the change from the end of January to the end of February. The photos show ice cover has increased dramatically.

The most recent photo was taken in this first week of March.

"You can see it's pretty much completely covered, but you see open water areas where the ice separates apart," Klump said.

Collectively, across all the Great Lakes, experts say this is the second highest amount of ice cover since the 1970s. The ice will likely completely thaw by April.

"The long-term, six-month-out projection is that lake levels will be slightly higher," Klump said.

There is about four to eight inches of water contained just in the snow, but Klump says it won't be enough to reverse a 14-year trend of low lake levels -- and the impact is huge.

The shipping season has already been cut short this year.

In fact, UWM crews take their own boat out for research every few weeks. Since January 1st, 2014, they've only been able to go out twice. 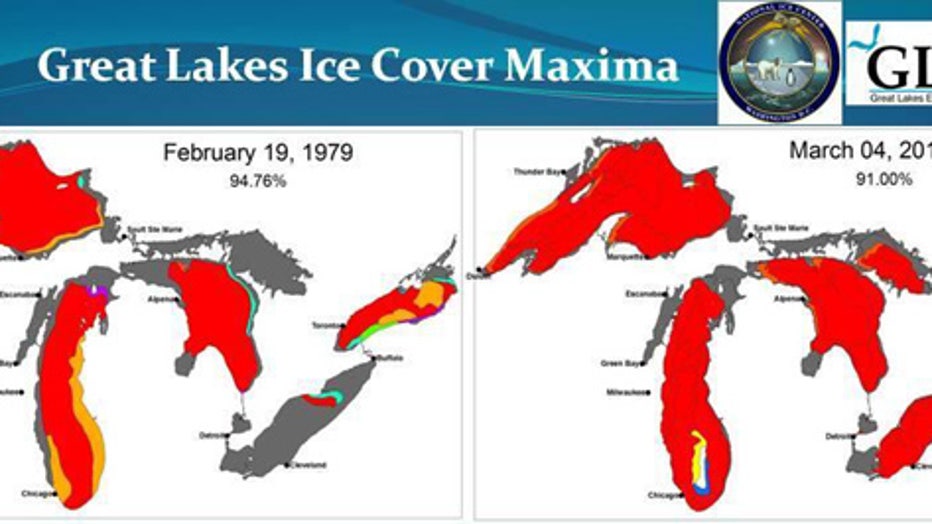