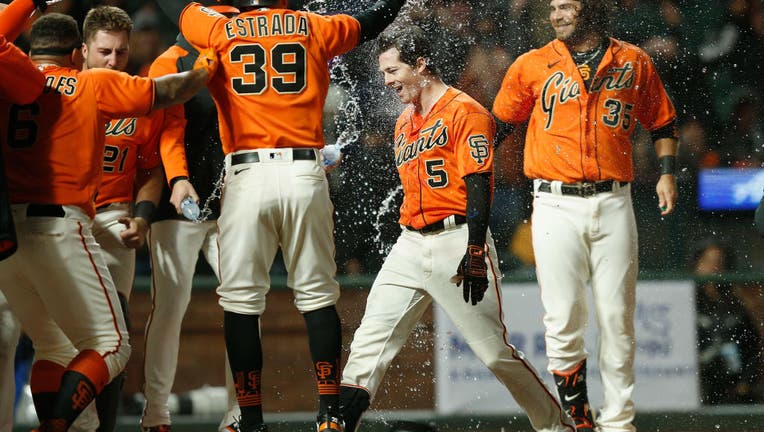 SAN FRANCISCO, CALIFORNIA - JULY 15: Mike Yastrzemski #5 of the San Francisco Giants celebrates with teammates after hitting a walk-off grand slam in the bottom of the ninth inning against the Milwaukee Brewers at Oracle Park on July 15, 2022 in San

Hader was tagged with his second straight loss, two nights after giving up a walk-off, three-run homer to Minnesota’s Jose Miranda in the ninth inning. The All-Star closer failed to retire a batter in that one.

"Right now it’s everything," Hader said. "I feel like I’m trying to feel things that I don’t need to. I lost that aggressiveness that I normally have. I just have to chalk it up and move on."

Hader (0-4) again had trouble keeping the ball in the park.

Joey Bart started the comeback in the ninth with a leadoff home run. After pinch-hitter Wilmer Flores flied out, Darin Ruf connected to make it 5-4.

Austin Slater followed with his fourth hit of the night and Hader hit Yermín Mercedes with a pitch before Thairo Estrada’s bloop single loaded the bases.

Yastrzemski then drilled the first pitch he saw from Hader to center field, with Estrada pumping his fists in celebration before the ball even cleared the fence.

"I was just ready for a fastball, ready to get something in the zone," Yastrzemski said. "I just wanted to get it to the outfield and hoped that we could get one run in to tie the game. It was nice that it worked out that way."

"He’s lived with a great fastball; hitters know that a fastball’s coming," Counsell said. "He’s not making a lot of pitches right now. He’s searching to make pitches. Location is obviously an issue, that’s number one. We’ve got to get to work and help him out."

It’s the first time this season the hard-throwing lefty has allowed home runs in back-to-back appearances.

"The good thing about Josh is that he has the right mindset for that closer’s job and he understands that role so well," Milwaukee starter Brandon Woodruff said. "It’s a hard game, stuff happens. I know he’s upset. He’ll be just fine."

LaMonte Wade Jr. also homered for the Giants, who have won five of seven. Sam Long (1-2) got three outs for the win.

Andrew McCutchen continued his surge at the plate with a three-run double for the Brewers. McCutchen is batting .323 (43 for 133) with 22 RBIs in his last 34 games after a 1-for-40 slump.

Woodruff matched his career high of five walks and pitched with runners on base most of the game, but repeatedly worked out of trouble. He allowed two runs and five hits with four strikeouts in 5 2/3 innings.

David Villar turned in a pair of defensive gems in the third inning to highlight his second consecutive start at third base for the Giants. Villar made a leaping grab of Jonathan Davis’ sharp liner, then followed with a barehanded grab and throw for the out on Willy Adames’ slow grounder. Villar was also charged with an error in the sixth when he cut in front of shortstop Brandon Crawford and dropped Kolten Wong’s popup.

Wong reached on an infield single leading off the third when Wade and Giants starter Alex Wood collided near first base line trying to make a play. Wood grabbed the ball with his glove and reached over a crouching Wade to attempt the tag, but couldn’t get close enough.

Brewers: Christian Yelich, who scored the winning run Thursday as a pinch-runner, was back in the starting lineup batting leadoff after missing three games with back tightness.