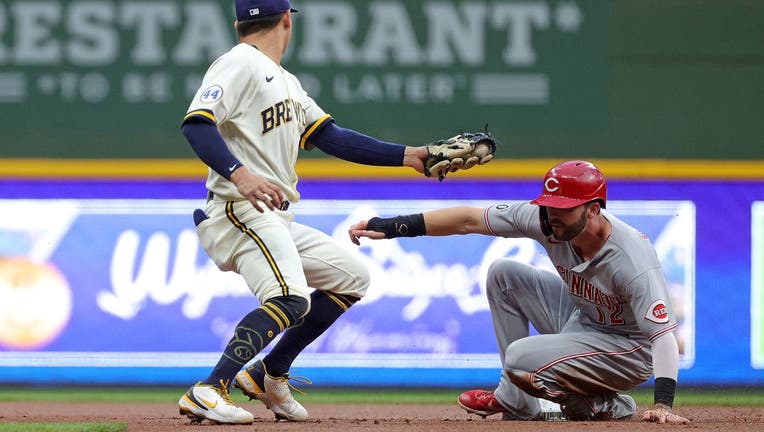 MILWAUKEE, WISCONSIN - AUGUST 25: Tyler Naquin #12 of the Cincinnati Reds slides safely into second base during the first inning against the Milwaukee Brewers at American Family Field on August 25, 2021 in Milwaukee, Wisconsin. (Photo by Stacy Revere

MILWAUKEE - Brandon Woodruff struck out 10 in six shutout innings and the Milwaukee Brewers beat Cincinnati 4-1 on Wednesday night, extending their NL Central lead over the Reds to 9 1/2 games.

Avisaíl García hit an RBI double and made two big defensive plays in right field for the Brewers, who have won 12 of 15.

Woodruff (8-7), an All-Star in 2019 and 2021, struggled in his two previous starts, giving up six runs in five innings at St. Louis after lasting only three innings in Chicago against the Cubs. But this time, he permitted only four hits and retired 13 straight batters during one stretch.

"The difference for me is just getting ahead. That’s like number one for me. When I can get ahead I’m able to locate the fastball, for the most part. It just helps me out so much more with everything else. That’s my game," Woodruff said.

Votto was called out on a 97 mph fastball in the first inning with one out and runners on second and third. The other time Woodruff was threatened was in the sixth. With a runner on third, Votto worked the count full for a third straight time, but flied out to end the inning.

In all, the teams combined for 25 strikeouts.

Castillo didn’t allow a hit — or a ball out of the infield — until Christian Yelich hit a grounder past third base for a leadoff double in the fourth. Two pitches later, García doubled to give Milwaukee a 1-0 lead.

Those were the only two hits by the Brewers until Jace Peterson's RBI double in the seventh chased Castillo.

"You can’t really pitch much better than that," Reds manager David Bell said.

Kolten Wong scored on Amir Garrett's wild pitch in the eighth, and Luis Urías added an RBI groundout to make it 4-0.

García robbed pinch-hitter Max Schrock of a home run in the eighth. In the sixth, he threw out Nick Castellanos trying to stretch a single.

Castellanos hit his 23rd home run off Jake Cousins in the ninth.

Milwaukee reliever Brad Boxberger retired the Reds in order in the seventh inning and Devin Williams did the same in the eighth. Cousins pitched the ninth and struck out Votto, who had words with plate umpire CB Bucknor.

Milwaukee manager Craig Counsell on Brewers ace Corbin Burnes, who gave up four runs over six innings in the team’s 7-4 win over the Reds on Tuesday: "I thought Corbin almost felt too good yesterday. I think sometimes that that can happen to a pitcher, where they’re almost feeling too good, where sometimes that little bit of fatigue kind of locks you in a little bit."

Castillo started the first inning by snagging Wong’s line drive and ended it by putting his glove behind his back to snag a grounder by García and throw him out. ... Entering the game, Brewers pitchers led the NL in shutouts (15) and were among the league leaders in ERA (third, 3.38), strikeouts (second, 1,253) and fewest home runs allowed (tied for second, 120).

Reds: Placed RHP Tejay Antone (right forearm strain) on the 10-day injured list, recalled Schrock from Triple-A Louisville and released RHP Michael Feliz. Antone (2-0, 2.14 ERA) had been reinstated from the IL on Tuesday. He relieved in the eighth inning that night, but called a trainer to the mound as he faced his first batter and left the game. Bell said he expected to know more in a day or so about Antone’s condition. "He’ll have all kinds of support and everything he needs to get through this," Bell said. ... All-Star OF Jesse Winker (intercostal strain) likely won’t return for at least a couple of weeks, Bell said.

Brewers: SS Willy Adames, who left early Tuesday with left quadriceps discomfort, did not play as expected. Counsell said Adames is day-to-day. Acquired in a May 21 trade with the Rays, he is hitting .295 with 17 home runs and 50 RBIs for the Brewers.

Cedarburg mural removed by school board reborn in Grafton

Two people were transported to the hospital Wednesday night, Aug. 25 following a boat accident on Lake Michigan in Sheboygan County.