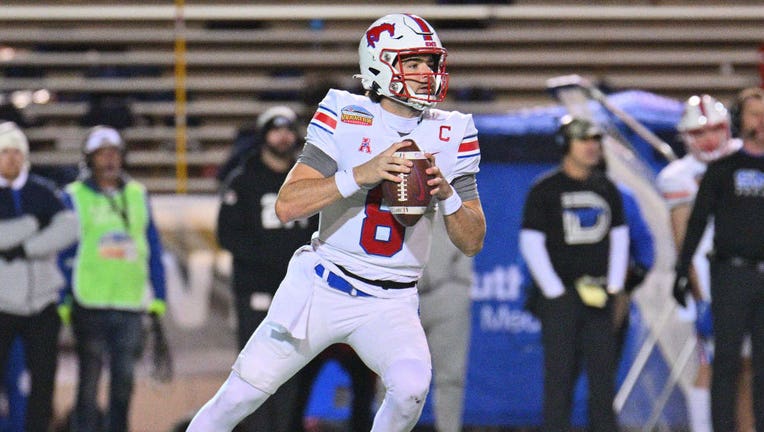 ALBUQUERQUE, NEW MEXICO - DECEMBER 17: Quarterback Tanner Mordecai #8 of the SMU Mustangs drops back to pass against the Brigham Young Cougars during the first half of the New Mexico Bowl at University Stadium on December 17, 2022 in Albuquerque, New

MADISON, Wis. - Quarterback Tanner Mordecai announced on social media Friday that he is transferring from SMU to Wisconsin.

"I could not be more fired up to play at a school with rich history and a winning culture," Mordecai said. "Let’s ride!"

Mordecai also thanked SMU’s faculty, staff and program. He said: "I have made relationships that I will cherish and carry for the rest of my life."

After spending 2018-20 as a reserve quarterback for Oklahoma, Mordecai transferred to SMU and was the Mustangs’ starter the last two seasons.

Mordecai is the second quarterback to announce plans to transfer to Wisconsin since Fickell’s arrival. Former Oklahoma quarterback Nick Evers tweeted two weeks ago that he had committed to Wisconsin.