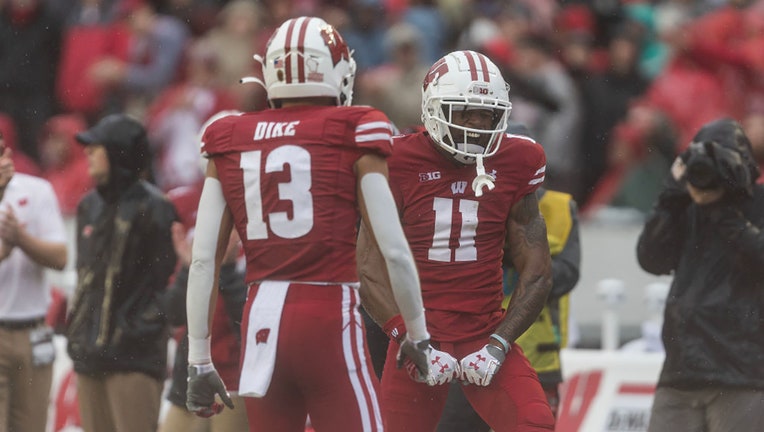 Wisconsin Badgers wide receiver Skyler Bell celebrates after a big run down the sideline against the Maryland Terrapins on Nov. 5. (Photo by Dan Sanger/Icon Sportswire via Getty Images)

MADISON, Wis. - Isaac Guerendo ran for an 89-yard touchdown and combined with Braelon Allen for 233 yards rushing as Wisconsin defeated Maryland 23-10 on Saturday.

Wisconsin (5-4, 3-3 Big Ten) improved to 3-1 under interim head coach Jim Leonhard, who was promoted from defensive coordinator after the firing of Paul Chryst last month.

With rainy and windy conditions severely hindering each team’s ability to throw the ball, Wisconsin’s superior ground attack made the difference.

"It didn’t seem as though they were as affected by the elements as we were," Maryland coach Mike Locksley said. "That starts with me as the head coach."

Allen rushed for 119 yards on 23 carries and gave the Badgers the lead for good with a 9-yard touchdown that opened the scoring late in the first period. Guerendo ran 12 times for a career-high 114 yards, including the 89-yard score that made it 14-0 in the second quarter.

Maryland quarterback Taulia Tagovailoa entered the day having completed 72.5% of his passes to rank fourth among all Football Bowl Subdivision players, but he went 10 of 23 for just 77 yards and was sacked five times. The lone touchdown for Maryland (6-3, 3-3) came on a 5-yard completion from Tagovailoa to Tai Felton with 57 seconds left in the game.

"We did a great jo of containing him and forcing him to make throws and make some tough decisions," Leonhard said.

"If you were going to try to throw it much over 10 yards, the ball was going to be affected in a big way," Leonhard said of the weather's impact on the game.

The Badgers' defense benefited from the return of Big Ten sacks leader Nick Herbig and safety Hunter Wohler to end Maryland’s string of 10 straight games in which it had scored at least 27 points.

Herbig had missed Wisconsin’s 35-24 victory over Purdue two weeks ago with a knee issue, while Wohler hadn’t played since suffering a leg injury in the season opener. Herbig had two of Wisconsin's five sacks to increase his season total to eight. Wohler recorded Wisconsin’s 15th interception of the season in the fourth quarter.

Neither team got a single first down through the first five possessions of the game while dealing with the poor weather before Wisconsin broke through late in the first quarter. The rain was intermittent after the first quarter, but the wind swirled all day.

After a 36-yard run by Skyler Bell got Wisconsin into Maryland territory, Allen capitalized on a block from fullback Riley Nowakowski to score on a 9-yard run on third-and-3 late in the first quarter.

Wisconsin extended the lead early in the second quarter on a spectacular touchdown from Guerendo, who cut to his right and raced down the Badgers’ sideline while carefully staying inbounds for an 89-yard touchdown. Wide receiver Chimere Dike escorted Guerendo much of the way with some exceptional downfield blocking.

House of Pain’s Everlast was at Camp Randall Stadium and introduced the traditional playing of House of Pain’s "Jump Around" before the start of the fourth quarter.

Maryland: The Terps didn't respond well to the weather and squandered an opportunity to earn their fourth conference win, which would have matched their highest total since joining the Big Ten in 2014. The road now gets tougher for Maryland, which visits No. 16 Penn State (No. 15 College Football Playoff ) and hosts No. 2 Ohio State (No. 2 CFP) in the next two weeks.

Wisconsin: Leonhard continues to make a strong case that he should have this job for keeps. If Wisconsin can win two of its final three regular-season games, it should remove all suspense. This rout of Maryland follows a 35-24 victory over Purdue. Both Purdue and Maryland were just outside the Top 25 when they came to Camp Randall Stadium.

Maryland: At No. 16 Penn State (No. 15 College Football Playoff) on Saturday.

Wisconsin: At Iowa on Saturday..