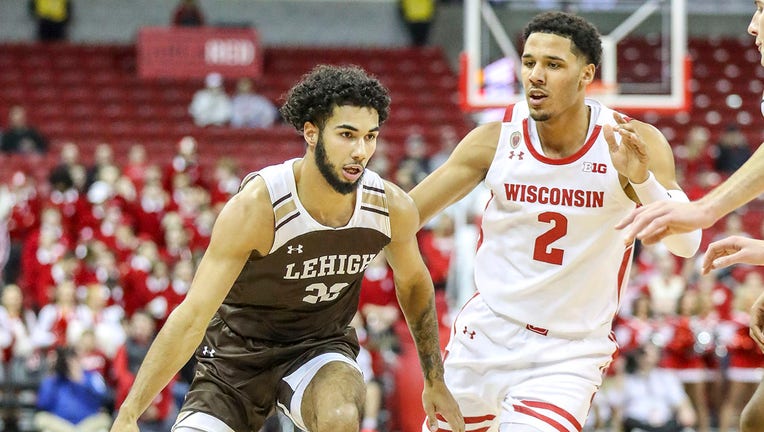 Lehigh guard Tyler Whitney-Sidney tries to get past Wisconsin guard Jordan Davis on Dec. 15 at the Kohl Center. (Photo by Lawrence Iles/Icon Sportswire via Getty Images)

Freshman Connor Essegian added 13 points and matched a career high with six rebounds off the bench for the Badgers (9-2) in their fourth straight victory.

Tyler Wahl, who scored a career-high 21 points in Wisconsin’s overtime victory at Iowa on Sunday, had 13 points and seven rebounds. Wisconsin was 11 of 20 from 3-point range, with Davis going 4 of 6.

Evan Taylor led Lehigh (4-5) with 18 points and Keith Higgins Jr. had 15. The Mountain Hawks shot 55.6% from the field in the first meeting between the schools.

Higgins had six points to help the Mountain Hawks take a 17-8 lead. The Badgers had turnovers on six of their first 13 possessions.

Higgins scored five straight points to push Lehigh to a 43-38 lead early in the second half. But Essegian came off the bench and made back-to-back 3-pointers to put the Badgers back on top at 44-43 with 13:21 left.

Lehigh: The Mountain Hawks' inside game was strong in the first half as they scored 22 of their 32 points in the paint, with most of those baskets coming off dribble drives. Taylor had 10 first-half points.

Wisconsin: Badgers coach Greg Gard used early substitutions to help Wisconsin find success on offense and defense. Carter Gilmore came off the bench and contributed four points and five rebounds in nine minutes in the first half. Essegian and Kamari McGee also contributed in the first.

Lehigh: At Saint Elizabeth on Saturday.