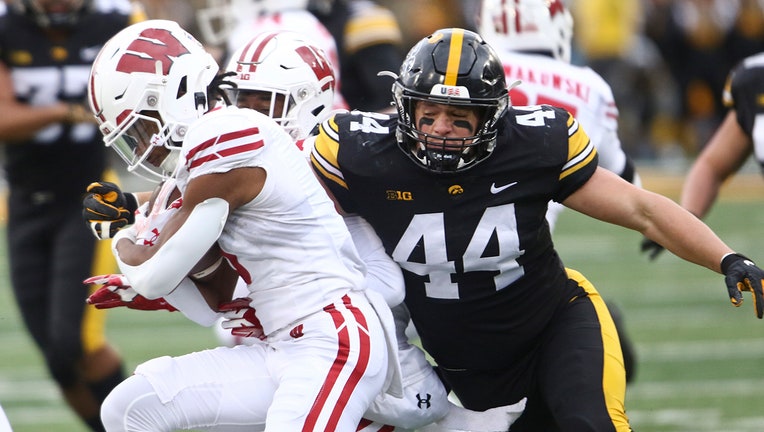 Dean Engram of the Wisconsin Badgers tackled by linebacker Seth Benson of the Iowa Hawkeyes on Nov. 12. (Photo by Matthew Holst/Getty Images)

IOWA CITY, Iowa - Cooper DeJean returned an interception for a touchdown and set up another score with a 41-yard punt return as Iowa defeated Wisconsin 24-10 on Saturday.

The Hawkeyes (6-4, 4-3 Big Ten) moved into a tie for the Big Ten West lead with their third consecutive win. Iowa, ranked 129th nationally in total offense, had just 142 yards and averaged 2.1 yards per play, but took advantage of plays made by its defense and special teams.

DeJean, a sophomore cornerback who also had 10 tackles, had a 32-yard interception return late in the first half that gave Iowa a 14-3 lead. Then, with the Hawkeyes holding a 14-10 lead in the third quarter, DeJean’s punt return gave Iowa the ball at the Wisconsin 18-yard line. Five plays later quarterback Spencer Petras scored on a 1-yard dive.

Iowa’s Drew Stevens had a 44-yard field goal with 2:54 left in the game for the final points.

Petras, who threw for just 94 yards, was sacked six times. Mertz threw for 176 yards but was sacked four times.

Wisconsin, which had won eight of the last 10 games against Iowa, was able to get some yardage against the Hawkeyes, who rank in the top 10 nationally in total defense, scoring defense, rushing defense and passing defense. But Mertz’s two interceptions and a fourth-quarter fumble were costly.

This was an elimination game for the West Division lead, and Iowa came up with the biggest plays. The Hawkeyes are now part of the four-way tie for the lead with Illinois, Purdue and Minnesota, and they became bowl eligible.

Wisconsin: At Nebraska on November 19.

Iowa: At Minnesota on November 19.