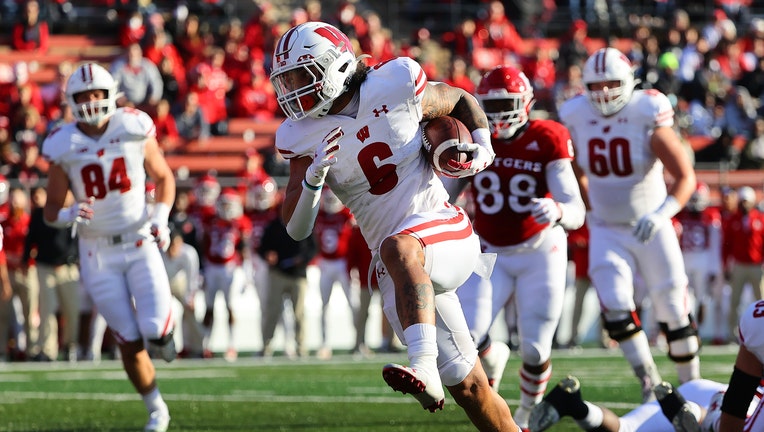 Wisconsin Badgers running back Chez Mellusi runs for a touchdown against the Rutgers Scarlet Knights on Nov. 6, 2021 (Photo by Rich Graessle/Icon Sportswire via Getty Images)

Chez Mellusi, Braelon Allen and Jackson Acker each ran for a touchdown and cornerback Caesar Williams highlighted a dominant performance by the Badgers' top-ranked defense by returning an interception 29 yards for a touchdown.

Mertz's touchdown passes covered one yard to John Chenal, 25 yards to Kendric Pryor and 72 yards to Danny Davis as the Badgers had their biggest point production since scoring 61 against Central Michigan early in 2019.

Coupled with No. 20 Minnesota's loss to Illinois, Wisconsin (6-3, 4-2 Big Ten) will have a share of first place in the conference's West Division after opening the season with a 1-3 start, its worst since 1990.

Rutgers (4-5, 1-5) lost for the fifth time in six games and saw its hopes for a first bowl bid since 2014 take another hit after a 3-0 start. Wisconsin's 52-points tied Ohio State for most allowed by the Scarlet Knights this season.

Wisconsin never trailed in beating Rutgers for the fourth time in as many games.

Mellusi opened the scoring with a 14-yard run on the second play after linebacker Noah Burks intercepted Noah Vedral's first pass and returned it to the Scarlet Knights' 15.

Val Ambrosio's 24-yard field goal on the ensuing series were Rutgers' only points. The Badgers scored 24 in the second quarter to put the game away.

The turning point came after a short field goal by Collin Larsh. Former Badgers player Aron Cruickshank fumbled on the ensuing kickoff return and that set up the short, fourth-down touchdown pass by Mertz, who was 11-of-16 for 240 yards. Fourteen seconds later, Williams scored on the interception return and the rout was on.

Scarlet Knights defensive end and co-captain Mike Tverdov and receiver Brandon Sanders did not play for a violation of team rules.

The Badgers are forcing turnovers galore. They had eight in beating nationally-ranked Iowa and Purdue in the previous two games. They added four more against Rutgers Saturday. The Scarlet Knights were limited to 207 yards.

Rutgers: At Indiana on Saturday.

Green Bay Packers quarterback Jordan Love will make his first NFL start against the Kansas City Chiefs with Aaron Rodgers out due to COVID-19.

Green Bay Packers fans had varied opinions on Aaron Rodgers after the quarterback commented on COVID-19 and vaccines Friday.