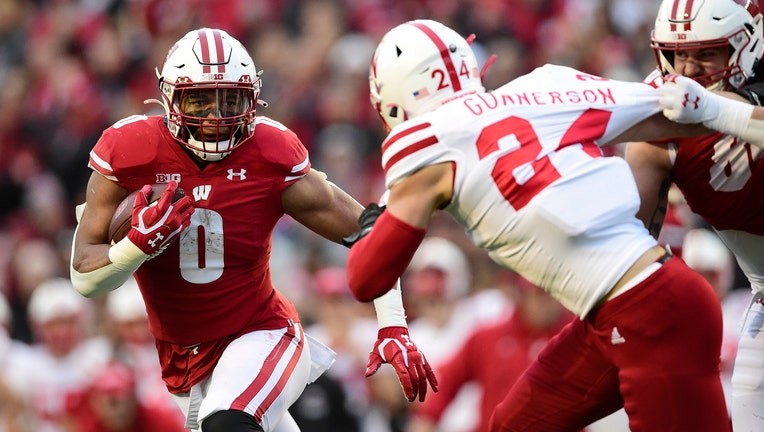 Braelon Allen of the Wisconsin Badgers runs with the ball against the Nebraska Cornhuskers at Camp Randall Stadium on Nov. 20, 2021. (Photo by Patrick McDermott/Getty Images)

MADISON, Wis. - Braelon Allen rushed for 228 yards and three touchdowns – including a tiebreaking 53-yarder with 3:50 remaining – to help No. 19 Wisconsin outlast Nebraska 35-28 for its seventh consecutive victory Saturday.

Nebraska drove to Wisconsin’s 11-yard line in the final minute but ended up losing the ball on downs at the 21. Faion Hicks broke up Adrian Martinez’s fourth-down pass to Zavier Betts with four seconds left.

The Badgers (8-3, 6-2 Big Ten, No. 15 College Football Playoffs) handed Nebraska (3-8, 1-7) its fifth straight loss and moved a step closer to playing for a conference title.

Wisconsin will clinch its fourth Big Ten championship game appearance in the last six years if it wins its regular-season finale at Minnesota. Wisconsin is tied with No. 18 Iowa for first place in the West but owns the tiebreaker advantage because it beat the Hawkeyes 27-7 on Oct. 30.

Allen, who had 22 carries Saturday, has rushed for over 100 yards in each of Wisconsin’s last seven games. The 17-year-old had totaled 12 carries during Wisconsin’s 1-3 start.

Allen had a career-long 71-yard touchdown in the first quarter and a 3-yard score late in the third quarter. After Nebraska tied the game with 6:27 left in the game on Marvin Scott’s 3-yard touchdown, Allen put Wisconsin back ahead with one more breakaway.

Allen went through the right side of the line, headed toward the sideline and easily shed safety Myles Farmer’s tackle attempt inside the 30.

Nebraska got a first down from the Wisconsin 11 in the final minute. But after right tackle Bryce Benhart committed a holding penalty that pushed the Cornhuskers back 10 yards, Martinez threw four straight incompletions.

Nebraska coach Scott Frost received an unsportsmanlike conduct penalty after the fourth-down incompletion, perhaps believing Hicks made contact with the receiver before the throw arrived.

Nebraska: In its first game since Frost fired four offensive assistants, the Cornhuskers gained 452 yards, the most Wisconsin's top-ranked defense had allowed all season. But it still added up to one more close loss against a quality team. Nebraska is 5-19 in one-score games during Frost's coaching tenure.

Wisconsin: The Badgers had three scoreless trips inside Nebraska's 35-yard line but still showed their offense is good enough to win games when their defense isn't dominant.

Wisconsin could move up a few spots but probably won't get into the top 15.

The Milwaukee Bucks launched an NBA Reclaimed Program that will transform the team’s 2021 NBA Championship Court from Fiserv Forum into collectibles.

The FOX6 High School Blitz came to a close for the 2021 season, profiling teams from southeastern Wisconsin that hoisted the championship trophy this year.