Big Ten West favorites and ranked no. 12 in the country, the Wisconsin Badgers football team enters the 2021 season with high expectations.

All eyes will be on returning quarterback Graham Mertz, who had a dazzling debut before finishing with an up and down freshman season.

"It's been great to have the whole offseason to just kind of throw myself out there and be there for the guys and grow together," said Mertz. "For me, it's been great to understand that and know my role as a leader on this team."

As always, the team will be anchored by its defense, which only gave up 17 points per game last year.

Meanwhile, two southeastern Wisconsin standouts have also impressed during camp. One of them is safety Hunter Wohler from Muskego.

"I've been impressed," Leonhard said of Wohler. "Obviously physically, he moves really well. Smooth, great size. It's getting to the point in camp now where you show the physicality. He's had very few mental errors, it's just cleaning things up."

Then there's Braelon Allen, the running back from Fond du Lac who is doing his best to stand out in a stacked tailback room.

"He had a lot of success," said Paul Chryst, Badgers head coach. "I love his approach in how he goes about it. Just got to continue to keep grinding away at it." 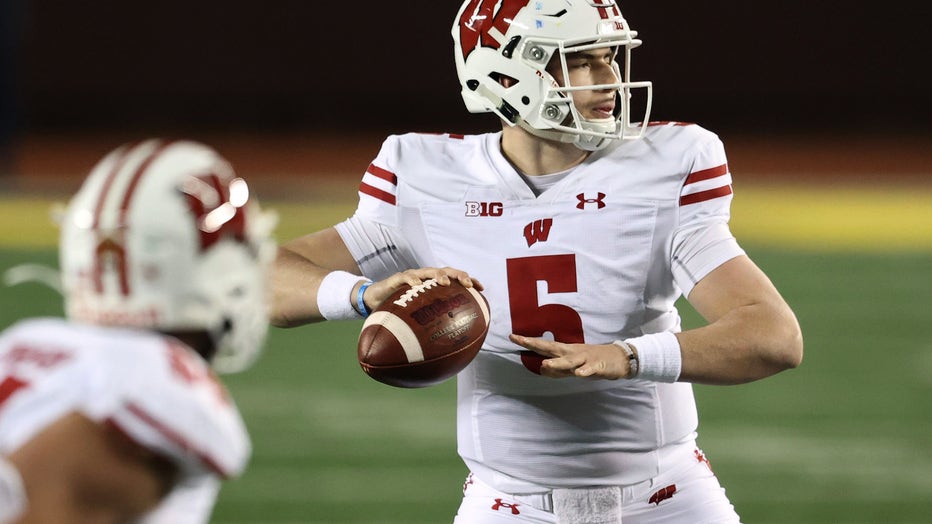 Graham Mertz of the Wisconsin Badgers throws a first half pass against the Michigan Wolverines on Nov. 14, 2020. (Photo by Gregory Shamus/Getty Images)

Those two rookies will be angling for playing time this year on two units that have taken big leaps during fall camp. Now, it's time to turn the page.

"Excited to transition, and now it's not too far out from starting this season, and obviously I think all the time as you go through the season, you still got to be working to get better," said Chryst. "I think there's a lot of good that came out of camp, and it doesn't just happen. You appreciate the efforts that people put in."

The Badgers kick off their season Saturday, Sep. 4 at home against no. 19 Penn State. You can watch the game on FOX6.

The Big Ten is the latest NCAA conference to announce that a team must forfeit if it doesn't have enough players available for a league game because of COVID-19.

'Giannis: The Improbable Rise of an NBA MVP' features 221 interviews

Giannis Antetokounmpo and Mirin Feder share a drive that has brought them to the top of their respective professions, and now, they also share an entry on the New York Times best seller's list.