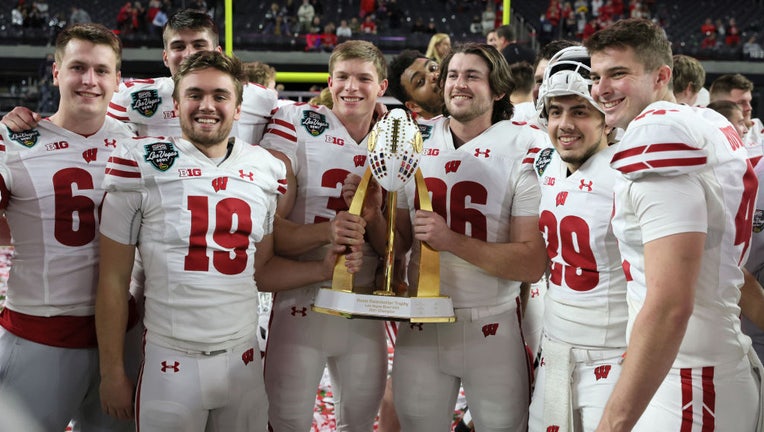 LAS VEGAS, NEVADA - DECEMBER 30: The Wisconsin Badgers pose with the championship trophy as they celebrate their 20-13 victory over the Arizona State Sun Devils to win the SRS Distribution Las Vegas Bowl at Allegiant Stadium on December 30, 2021 in L

LAS VEGAS - Braelon Allen thought his week in Las Vegas was rather uneventful.

After all, it's hard to really soak in Sin City when you're only 17 years old. He'll have to settle for his MVP award.

Allen ran for 159 yards and Wisconsin drained the final 9:57 off the clock with an 18-play drive that sealed a 20-13 victory over Arizona State in the Las Vegas Bowl on Thursday night.

Allen, a true freshman from Fond Du Lac, Wisconsin, had 101 yards by halftime for his eighth 100-yard game of the season. He averaged 6.8 yards per carry this year, falling just short of joining NFL stars Melvin Gordon and Jonathan Taylor as the only Wisconsin running backs to average 7 yards per attempt over a full season. 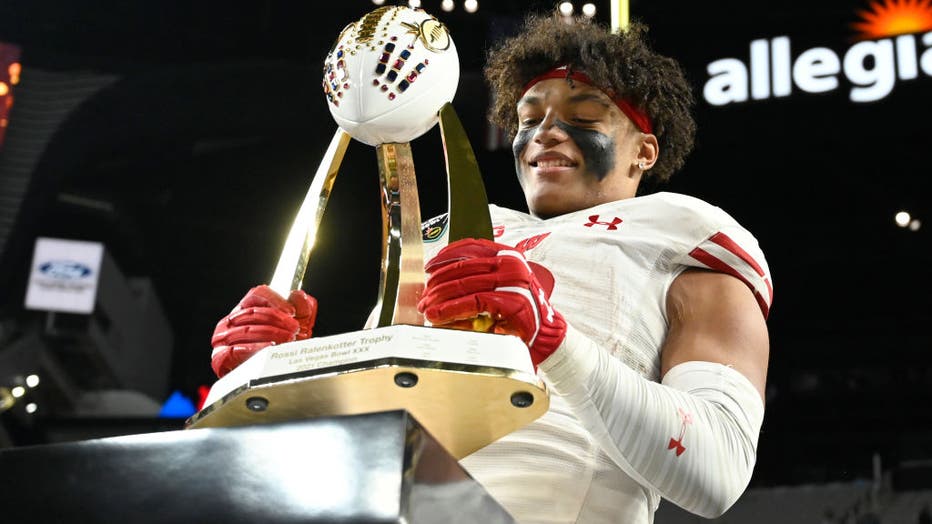 "Being able to have the season that I ended up having, I can't thank the guys enough for the support," said Allen, selected the game's MVP. "Keeping my head on straight and keep on encouraging me, just telling me my time was going to come. All the credit goes to the O-line and all the guys in the room."

Graham Mertz finished 11 of 15 for 137 yards and a 7-yard touchdown toss late in the first quarter to senior tight end Jake Ferguson, who caught three passes for 33 yards for Wisconsin (9-4).

"Really proud of this group," Badgers coach Paul Chryst said. "Took a lot of guys to get us that victory. It's really what this season's been. It's a special team."

The Badgers started 1-3 with Big Ten losses to ranked opponents Penn State and Michigan but answered with a seven-game winning streak to earn a 20th consecutive bowl bid.

"It was all of us just coming together, trusting each other, being confident in our prep and taking that extra step to perfect what we were doing," Allen said.

Clinging to a seven-point lead, the Badgers took over at their own 3 with just under 10 minutes remaining and drove 90 yards to run out the clock in the first bowl game at Allegiant Stadium, home of the NFL's Las Vegas Raiders.

Arizona State quarterback Jayden Daniels accounted for 199 total yards and threw an interception for the Sun Devils (8-5), who are 3-6 in bowls since 2011.

The Sun Devils were held to 219 total yards, including 102 in the first half. Wisconsin entered with the nation’s top defense, allowing 240.8 yards per game.

Cristian Zendejas connected on a couple of first-half field goals and Daniyel Ngata scored on a short TD run in the third quarter for Arizona State.

"Disappointing outcome for us," said Sun Devils coach Herm Edwards. "We got off to a bad start, I thought. Fell behind, and you don’t want to fall behind to a team like this. They chew a lot of time off the clock with the running game."

Arizona State has made the postseason in each full season under Edwards; the Sun Devils played only four games in 2020 due to the pandemic.

Arizona State allowed just 21 sacks this season, an average of 1.75 per game. Daniels was sacked a season-high four times and Wisconsin held the Sun Devils to 60 yards rushing on 33 carries.

Wisconsin came in with the top-ranked run defense in the country, permitting 65.2 yards per game.

"They’re one of the top-ranked defenses in the nation for a reason," Daniels said. "They’re very disciplined. We knew coming into the game that the game would be won at the line of scrimmage. I feel like we could have done a little bit better job run blocking, getting the run going."

Sophomore linebacker Nick Herbig had two sacks for Wisconsin and finished with a team-high nine this season.

"We knew it coming in, that it was going to be tough. We had a good plan," said Badgers linebacker Jack Sanborn. "Credit to (Daniels), he's a great player. When it mattered, we got it done."

The Sun Devils' quarterback tried all he could to rally his team in the second half. Daniels, who finished 11-of-21 passing for 159 yards, completed two nearly miraculous heaves; one to Ricky Pearsall for 38 yards that led to Ngata's 3-yard touchdown run, and a 35-yard completion to Jaylin Conyers on 3rd-and-18. Arizona State failed to score after that play.

A former Ms. Wheelchair Wisconsin received on Thursday, Dec. 30 an amazing gift courtesy of a foundation out of Minnesota – and it all came as part of a huge holiday surprise.