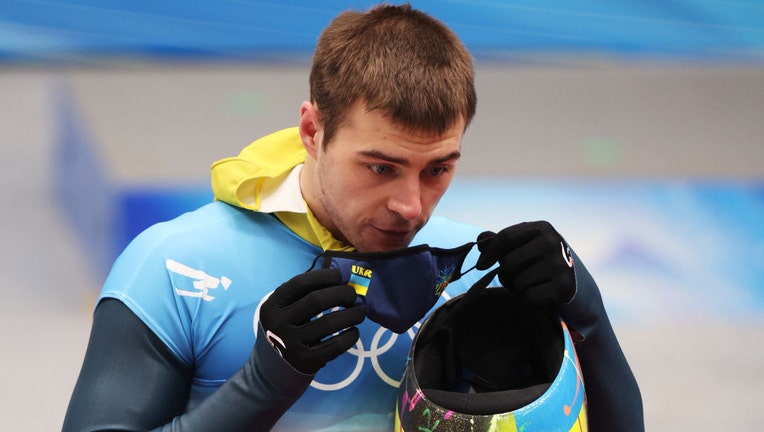 Vladyslav Heraskevych of Team Ukraine looks on after sliding during the Men's Skeleton Heat 4 at the Winter Olympic Games. (Adam Pretty/Getty Images)

The Ukrainian Olympic team has followed the lead of skeleton racer Vladyslav Heraskevych in calling for peace.

Heraskevych held up a sign with a Ukrainian flag and the message "No War in Ukraine" after completing a run in the skeleton competition on Friday at the Beijing Games. The message came against the backdrop of a Russian military build-up near the country’s border with Ukraine.

"The Olympic Team of Ukraine ... expresses a unanimous call for peace together with (our) native country," the Ukrainian Olympic Committee wrote on social media. "Being thousands of kilometers away from the Motherland, mentally we are with our families and friends."

The statement doesn’t mention Russia or the military situation.

The International Olympic Committee bans most protest gestures at the Games. But the Olympic body isn’t taking action against Heraskevych because "‘No war’ is a message we can all relate to," said Christophe Dubi, the executive director of the Olympic Games.

That doesn’t mean the IOC wants other athletes to join in, however.

"We all want peace, clearly," IOC spokesman Mark Adams said Sunday. "Athletes themselves have agreed that the field of play and the podium is not the place for any kind of statement because we need to remain politically neutral ... The message was understood. It (the sign) wasn’t repeated and I think we can move on."

No Ukrainian athletes have so far followed Heraskevych’s lead by protesting in competition.