CHICAGO - Giannis Antetokounmpo made a remark Sunday that could leave Milwaukee Bucks fans a bit nervous for the future.

Antetokounmpo appeared on FOX 32 Chicago’s "The Sports Zone" and appeared to suggest he would be open to playing for the Chicago Bulls in the future. The two-time MVP cited the Bulls’ legacy in the NBA as one of the reasons why Chicago remained an attractive destination for him.

"I think anyone asked that question who plays basketball, if he said no, he’d be a liar. It’s a team that won multiple championships, a team with one of the greatest players, if not the greatest player to ever play this game," he said.

Antetokounmpo has been one of the most dominant players in the NBA over the last few seasons. He signed a five-year, $228 million contract extension before the start of the 2021-22 season, so if he were to join Chicago down the line, it would not be until he is in his 30s. 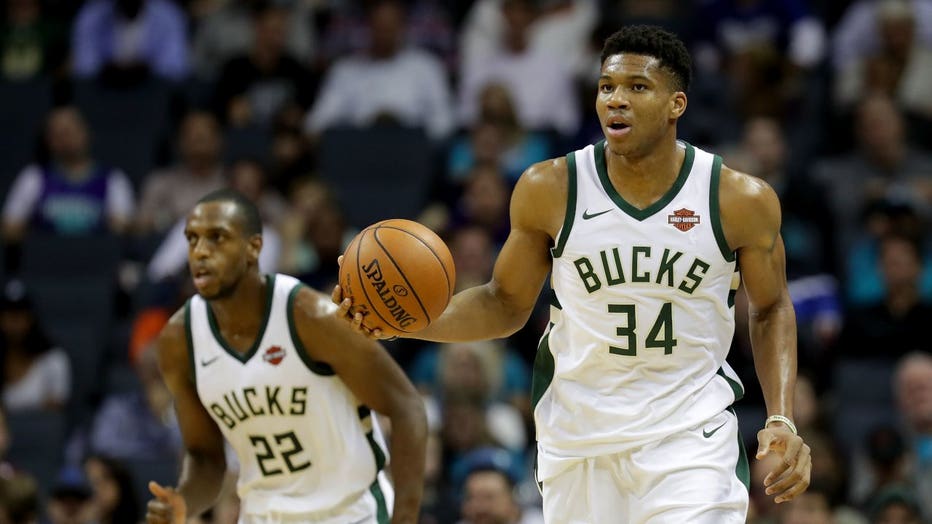 CHARLOTTE, NC - NOVEMBER 01: Teammates Khris Middleton #22 and Giannis Antetokounmpo #34 of the Milwaukee Bucks go up the floor against the Charlotte Hornets during their game at Spectrum Center on November 1, 2017 in Charlotte, North Carolina. (Phot

Milwaukee selected Antetokounmpo with the No. 15 pick of the 2013 NBA Draft. He has been an All-Star for the last six seasons and is averaging 21.8 points, 9.4 rebounds, 4.6 assists, 1.3 blocks and 1.2 steals per game over the course of his career.

The story of Antetokounmpo and his brothers, Thanasis and Kostas, emigrating from Nigeria to Greece on their way to achieving their NBA dream was the subject of the movie "Rise."

The Bucks won a championship in 2021. Antetokounmpo was named NBA Finals MVP.