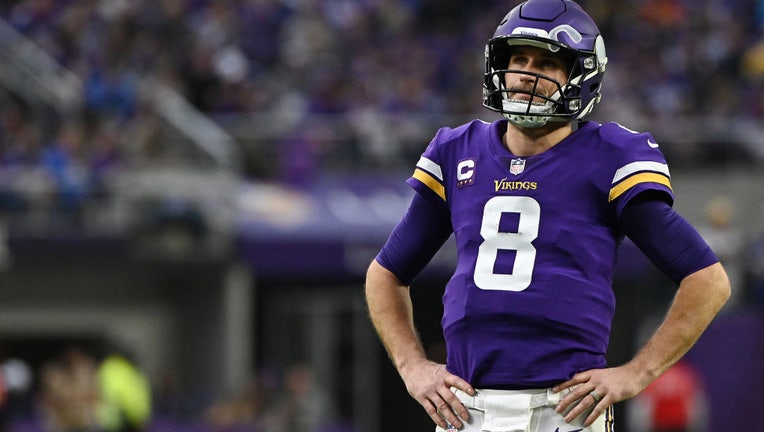 MINNEAPOLIS, MINNESOTA - DECEMBER 26: Kirk Cousins #8 of the Minnesota Vikings looks on from the field during the second quarter of the game against the Los Angeles Rams at U.S. Bank Stadium on December 26, 2021 in Minneapolis, Minnesota. (Photo by S

GREEN BAY, Wis. - The Minnesota Vikings placed quarterback Kirk Cousins on the COVID-19 reserve list on Friday, two days before their most important game of the season at Green Bay.

Cousins is unvaccinated. Even if he's asymptomatic, he wouldn't be able to return in time to face the Packers. The NFL recently reduced the required quarantine period to five days.

The Vikings (7-8) are one game out of the last wild-card spot in the NFC with two weeks to go. The Packers (12-3) are in control of the top seed and a first-round bye.

The Vikings also activated backup quarterback Sean Mannion from the COVID-19 reserve list, putting the seventh-year veteran in line to start at frigid Lambeau Field on Sunday night. Mannion started one game for the Los Angeles Rams in 2017 and one game for the Vikings in 2019, when Cousins was held out of the final regular-season game as a precaution prior to the playoffs.

Rookie Kellen Mond and recent addition Kyle Sloter are the other quarterbacks on Minnesota's roster. When Mond tested positive in training camp, Cousins had to sit out five days as an unvaccinated close contact.

Each of the last three matchups between the two clubs in Green Bay have been decided by six points or less, including a tie in 2018. Green Bay has scored 22-plus points in 12 of the last 15 home games vs. Minnesota.

Braelon Allen ran for 159 yards and Wisconsin drained the final 9:57 off the clock with an 18-play drive that sealed a 20-13 victory over Arizona State in the Las Vegas Bowl on Thursday night.

The Milwaukee Bucks extended their winning streak to five games with a 136-118 victory over the Orlando Magic on Thursday night.

A former Ms. Wheelchair Wisconsin received on Thursday, Dec. 30 an amazing gift courtesy of a foundation out of Minnesota – and it all came as part of a huge holiday surprise.