Tigre player Raúl Castro told a local news outlet that he adopted a stray dog who ran onto the field of a Christmas Eve soccer match after he found out that the dog was later struck by a car.

The U.S. was headed to another World Cup qualifying failure when Antonee Robinson entered, quickly tied the score and celebrated with a backward somersault.

Ricardo Pepi then put the U.S. ahead in the 75th minute, and Brenden Aaronson and Sebastian Lletget added late goals.

"I think it’s really important that we did that just to show everyone that at times it’s going to be a hard qualifying process, but we’re ready for the challenges that’ll come ahead," Robinson said. "We can respond to anything."

Pepi had a goal and two assists in his debut, and the Americans exhaled after a tumultuous week of injuries, positive COVID-19 tests and a huge disciplinary issue. They won for just the second time in 41 qualifiers in which they trailed at halftime (six draws).

"Despite all this crap that happened in these last couple days, the guys' spirits were extremely high," he said. 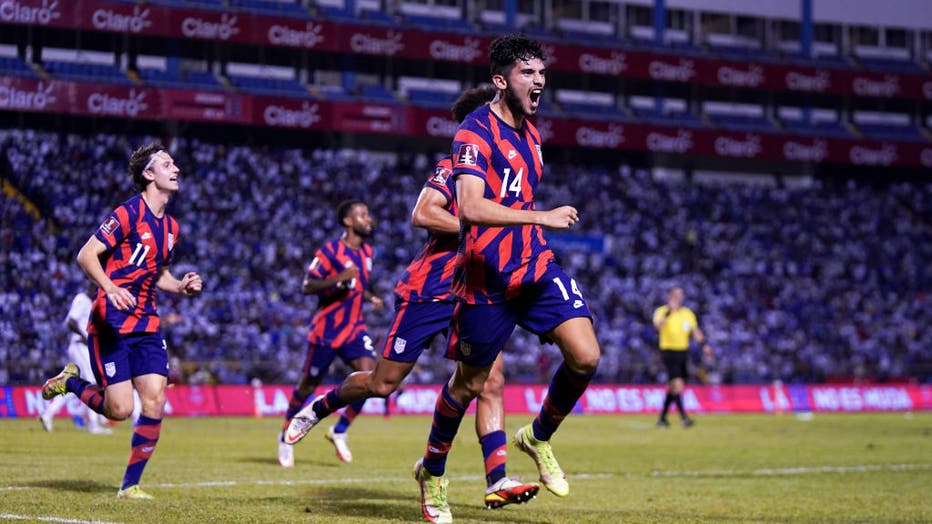 Despite a 12-1-2 record in 2021, two CONCACAF championships this summer and a No. 10 global ranking by FIFA, the Yanks’ quest to qualify for the 2022 World Cup has been anything but smooth sailing.

The USA finished with a 0-0 draw against El Salvador last Thursday and tied Canada 1-1 on Sunday, giving them just two points in the overall standings.

"If I’m a fan, I’m not happy with two points after two games, I’m not," Berhalter said prior to the match. "And I can understand frustration. That’s completely normal. But you have to look at the big picture. This is a marathon. It’s not a sprint. You don’t qualify in one window. There’s five separate windows that you get a chance to qualify for."

Mexico leads the North and Central American and Caribbean region with seven points, followed by Canada and the U.S. with five points each and identical goals for and against. Panama has five points and trails on goals, while Costa Rica and Honduras have two points apiece and Jamaica none. The top three nations qualify.

Qualifiers will occur periodically before concluding in March. The next round takes place Oct. 7 - 13, when the Yanks take on the Costa Ricans, Jamaicans and Panamanians.

By that time, they hope the drama from this round of qualifiers will be long gone.

U.S. soccer legend Landon Donovan scolded McKinnie on the Futbol with Grant Wahl podcast, saying McKinnie has a lot of work to do to regain the trust of his squad.

Christian Pulisic, who is fully vaccinated, missed the first qualifier last week after testing positive for COVID-19. Officials cleared him to participate in Sunday's game against Canada.

Steffen will miss all of September’s qualifiers after suffering back spasms and testing positive for the virus.

Reyna strained his hamstring in the El Salvador match and Sergiño Dest sprained his ankle against Canada.

All of these setbacks have disrupted what was believed to be one of the Yanks’ most talented squads as of late. And the lackluster performance thus far has invoked memories of the 2018 team, who failed to qualify for the World Cup.

This story was reported from Atlanta. The Associated Press and Kelly Hayes contributed to this report.