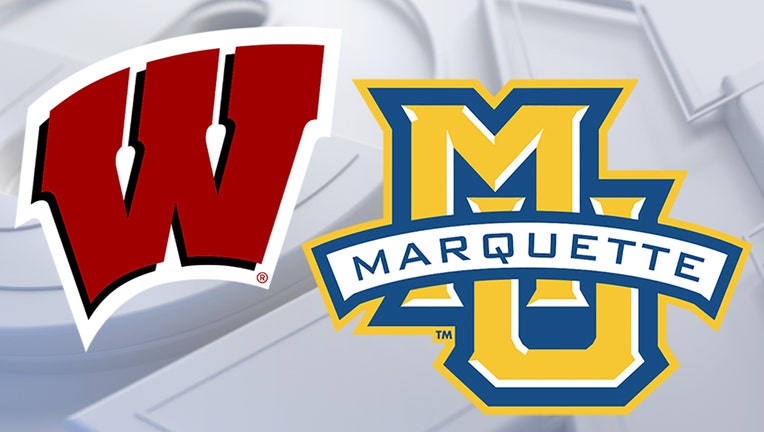 MILWAUKEE (AP) - Justin Lewis scored 18 points and converted a putback off a missed free throw at the buzzer as Marquette knocked off No. 4 Wisconsin 67-65 on Friday night.

Marquette’s D.J. Carton was just inside the 3-point arc when he drew a foul from Wisconsin’s D’Mitrik Trice with nine-tenths of a second left. Carton made the first free throw and his second attempt bounced off the rim.

Lewis got into the paint and tapped the ball with his right hand. The freshman's shot hit the front of the rim and went off the backboard before following through the basket to win the game as his teammates mobbed him under the basket.

The game marked the most thrilling of the 127 meetings between the two in-state foes whose campuses are about 75 miles apart, though the absence of spectators at Fiserv Forum due to the pandemic gave the latest edition of the rivalry a different feel.

The lead changed hands six times in the final 70 seconds, and neither team led by more than six points.

Marquette was narrowly ahead for most of the second half before Trice made two free throws with two minutes left. The lead went back and forth from there before the frantic final sequence.

Lewis had eight rebounds to go along with his 18 points. Carton scored 10 and Jamal Cain added 10.

Wisconsin: After beating three clearly inferior opponents by an average margin of 28 points to start the year, the Badgers faced their biggest challenge of the young season and couldn't pass the test. A potential home game against Louisville on Wednesday, assuming it goes on as scheduled, could reveal how much the Badgers learned from this defeat.

Marquette: The Golden Eagles bounced back in a big way from a 70-62 home loss to Oklahoma State in which they committed 24 turnovers and squandered an early 17-4 lead. This game should provide some confidence for a team learning to play without All-America guard Markus Howard, who led the nation with 27.8 points per game last season and ended his college career as the Golden Eagles’ all-time leading scorer.

This loss likely will drop Wisconsin to the bottom of the top 10 or just outside it. This is Wisconsin's highest ranking since reaching the No. 3 spot on March 16, 2015.